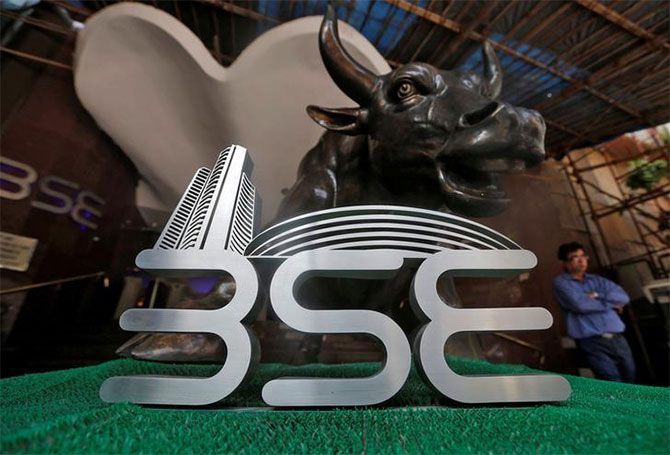 The Nifty50 index hit a fresh record high at close and the rupee also rose to its strongest level in nearly 17 months on Thursday after the Federal Reserve raised interest rates in US by 25 basis points but sounded less hawkish than expected on future rate hike path.

Broader market outperformed the frontline indices and also hit their respective all-time highs with the BSE Mid-Cap index and the BSE Smallcap index advancing 1.5% and 1%, respectively.

The market breadth, indicating the overall health of the market, was strong. On BSE, 1,784 shares rose and 1,042 shares fell. A total of 185 shares were unchanged.

"Nifty resumed its uptrend after a day of pause and gained nearly 1%. Sentiment was upbeat mainly in response to the US Fed's policy stance, which fell in line with market expectation.

"This clearly shows that markets are in no mood to slow down and gaining traction on every dip or pause. Traders should continue with buy on dips approach and avoid contrarian trades. Market is offering opportunities across the board but it's important to keep a close eye on sector rotation and timing them accordingly," he added.

Tata Steel, Adani Ports and Hindalco were the top gainers on Nifty and added up to 4% on NSE. Bharati Airtel, YES Bank and Reliance Industries were the top losers.

HCL Technologies gained 3% to Rs 864 in intra-day trade after the company said that its board of directors will meet on Monday, March 20, 2017 to consider a share buyback proposal. The stock closed 2% higher at Rs 855.

Ashok Buildcon moved higher to its 52-week high of Rs 199.65, up 7% in intra-day trade, after the company said its subsidiary - Ashoka Concessions (ACL) has emerged as the lowest bidder for bid submitted to National Highways Authority of India (NHAI). The stock closed 5% higher at Rs 195.

Nagarjuna Fertilizers and Chemicals hit its upper circuit at Rs 12.84, up 5% on back of heavy volumes on reports that Coromandel International is in talks to buy the company.

L&T rose over 2% intraday after the company said L&T Electrical & Automation FZE won a major order worth Rs 500 crore from Qatar Rail Company (QRAIL) for Phase I of Doha Metro.

European markets were trading higher following the Fed announcement of a fresh rate hike. The pan-European Stoxx 600 was 0.35% higher. Britain's FTSE and Germany's DAX gained 1% each, while France's CAC 40 was up 0.7%.