Benchmark shares indices staged a recovery in late trades, shrugging off the developments in Greece, led by pharma shares and index heavyweights while TCS gained ahead of its first quarter results this week.

"We have been quite vocal about market presenting a buying opportunity whenever any adverse news from Greece flows in.

"We are more or less insulated from the proceedings in Greece with Strong foreign exchange reserves, improving macros & crude again heading southwards.

"Manufacturing growth seems to have bottomed out; we are seeing signs of normalization in industry.

"For our markets, the Q1 Earnings season, progress of the monsoon & Monsoon Session of the Parliament are likely to be key triggers.

The broader market outperformed the benchmarks. The BSE Midcap and Smallcap indices ended up 0.9-1.1% each.

The Indian rupee recouped intra-day losses and was trading unchanged at 63.44 against the US dollar on fresh dollar tracking recovery in domestic equities.

EVENTS OF THE WEEK

The first quarter earnings season will kick off with Tata Consultancy Services announcing it April-June results on Thursday.

Index of Industrial Production (IIP) data for the month of May is scheduled to be released on Friday.

Post the announcement of the referendum results, Greece's Finance Minister Yanis Varoufakis said he was resigning, in a shock announcement despite the government having secured a resounding victory for the 'No' vote in the country's referendum on bailout conditions.

China's benchmark Shanghai Composite ended up 2.4% after market participants such as brokerages and fund managers offeres to buy huge quantities of stocks to bring out stability. 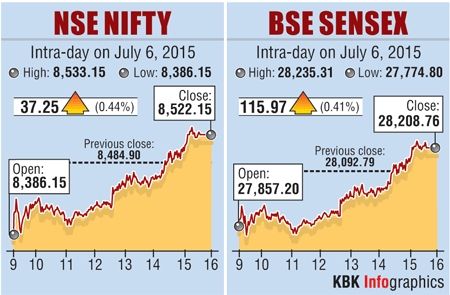 BSE Healthcare index was the top gainer up 1.7% followed by Oil & Gas and Realty indices followed by others.

Consumer Durables and Metal indices were among the top losers.

According to PTI reports, the government has taken several measures, including setting up of an inter-departmental committee to look into export-related issues and awareness programmes in emerging markets like Africa, to boost pharmaceutical exports.

Among the index heavyweights, Reliance Industries gained 1.1% while ITC ended up 0.9%.

Metal stocks witnessed selling as softening commodity prices compounding worries about oversupply, after Greece rejected terms for a bailout. Vedanta, and Hindalco ended down between 1.6-4.7% each.

In the IT space, Infosys ended down 0.7% and Wipro eased 0.3%. TCS recouped intra-day losses to end 1% higher ahead of its Q1 results due on Thursday.

VA Tech Wabag ended up 2.5% after the company along with their joint venture (JV) partner, Belhasa Projects, won an EPC order in the water and waste water treatment space in the Kingdom of Bahrain.

Arvind Remedies ended locked in 20% upper circuit after the board said it would meet on July 11 to consider proposal for investment in the company by a potential investor to make the unit viable.

Tilaknagar Industries ended up 20% on reports that the Kishore Chhabria-controlled Allied Blenders & Distillers (ABD) has entered the final round of negotiations to acquire a controlling stake in the company.