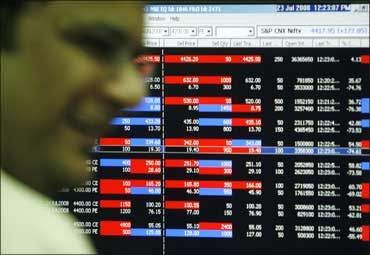 Benchmark shares continued their winning streak for the sixth straight session after reports over the progress of the monsoon and expectations that the crucial GST Bill will be passed in the monsoon session of the parliament.

In the broader markets, the BSE Midcap and Smallcap indices ended up 0.6%-1% each. Market breadth ended positive with 1713 gainers and 1018 losers on the BSE.

"A strong closing once again from the indices, however there was a late profit booking observed in many large cap names, notably looking at the pace of the last 5 days of straight momentum, I believe that the next key resistance for Nifty is at 8500-8550 mark and support from a very short term view could be upped at 8250 mark.

"Bank Nifty is also trading above the 18000 mark which has lended a decent support for the Nifty in the last few days.

"I believe that till the time the Banking index remains above the psychological mark Nifty could continue to trend higher," said Kunal Bothra, Head of Advisory, LKP Securities.

The Indian rupee edged higher against the dollar and was trading 10 paise at 67.22 compared to the previous close tracking gains in equities and near term concerns over Brexit waned.

The monsoon rains had covered almost entire India except some part of Gujarat and Rajasthan until Sunday and is expected to cover the remaining parts in 48 hours, the Indian Meteorological Department said on Sunday.

Larsen & Toubro ended up 1.6%. The company's IT subsidiary L&T Infotech plans to enter the capital market on July 11.

ONGC gained over 3% on the back of hike in kerosene prices which would lower its subsidiy burden. Oil India gained over 2%.

SBI ended up 1.5% after the state-owned banking major announced that it has sold 5% stake in National Stock Exchange for a consideration of Rs 911.25 crore.

Adani Ports ended up 4.3% after the board approved exploring the acquisition of TM Harbour Services Private Limited which is engaged solely in providing Tug Services to The Dhamra Port Company Ltd. (DPCL), a wholly owned subsidiary of the Company. 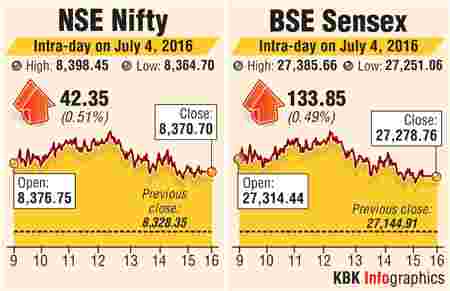 Coal India gained 2.6%. Coal India has achieved production of 42.72 million tonnes in June as against a target of 43.31 mt for the month.

Value buying was also seen in select Sensex stocks with ICICI Bank and BHEL up over 3.3%-4.8% each.

ITC was the top Sensex loser down 2.5% after the stock was quoted ex-bonus.

The board of directors of the company at its meeting held on May 20, 2016, had recommended the issue of bonus shares in the proportion of 1 (one) bonus share of Rs 1 each for every existing 2 (two) fully paid-up ordinary shares of Rs 1 each.

Among other shares, FDC ended up over 6% after the company announced that US Food and Drug Administration (USFDA) has completed inspection at its manufacturing unit situated at Waluj, Maharashtra.

TeamLease Services ended up 1.7% after the company reported acquisition of ASAP Info Systems Private Limited with a view to offer staffing solutions for IT services firms.

Bosch ended down 1.8% after the company announced that board approved a proposal to buy back equity shares at a price of Rs 23,000 per share through tender offer.