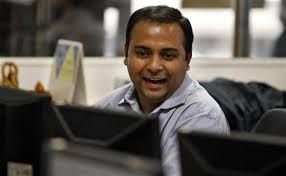 Markets ended at record closing highs for the fifth straight session led by financials and ITC while capital goods shares gained on hopes of order inflows after the breakthrough in the Indo-US treaty for civilian nuclear projects.

In the broader market, both the BSE Midcap and Smallcap indices underperformed compared to the front-liners with gains of 0.8% and 0.5% each.

Market breadth in BSE ended negative with 1,514 declines against 1,415 advances.

The US Federal Reserve will meet for its two-day policy meet, the first in 2015, on Tuesday.

Analysts expect it to maintain its earlier stance of remaining 'patient' on increasing the key rates.

The victor Syriza Party has promised to re-negotiate Greece debts with its international creditors and bring a halt to the austerity measures.

On the domestic front, Prime Minister Narendra Modi bid farewell to US President Barack Obama who left India after a three-day visit.

During the visit the Indo-US civil nuclear treaty was given a fresh start paving the way for future collaborations on civilian nuclear projects between the two countries.

9 of the 12 sectoral indices of BSE ended in green.

BSE IT index, down 1.6% was the top loser followed by BSE Metal index which ended down 0.6%. Financials were among the top gainers in today’s trade.

Since January 15, Bank Nifty has outperformed the market by surging 10% after the Reserve Bank of India (RBI) Governor Raghuram Rajan unexpectedly cut the benchmark repurchase rate by 25 basis points to 7.75% from 8%.

The benchmark index gained 7.5% during the same period. Capital Goods stocks too ended higher. L&T gained around 2% and BHEL ended up around 0.7%.

FMCG major, ITC gained over 3%. Among auto stocks, Maruti Suzuki was up around 2% and reached its record high while Tata Motors was the lead gainer from the pack and gained around 3%.

However, M&M and Bajaj Auto declined around 2.8% and 1.3% respectively. Maruti Suzuki today reported 18% growth in net profit to Rs 802 crore compared to Rs 681.2 crore in the year-ago period.

The EBITDA came in at Rs 1,593 crore, with operating margin at 12.7%. "Higher volumes and favourable forex contributed to the bottom-line," the company said in a statement.

While Cipla gained around 5%, Sun Pharma and Dr Reddys Lab declined around 1% and 4% each. Ranbaxy which is to be acquired by Sun Pharma, lost its 180 day exclusivity on Nexium, a heartburn drug from AstraZeneca, after the US Food & Drug Administration (FDA) allowed Teva Pharma to launch generic version of the drug.

The company has been awarded a multi-year strategic infrastructure management contract by AIB, a leading bank in Ireland offering a full range of personal and corporate banking services.

Metal stocks were under pressure with Hindalco losing over 1.5%.

Coal India down 2.7% and HUL down 2.1% were other major losers. Among other stocks, Rajesh Exports rallied 12% on back of heavy volumes after the company announced its plans to foray into gold finance business.