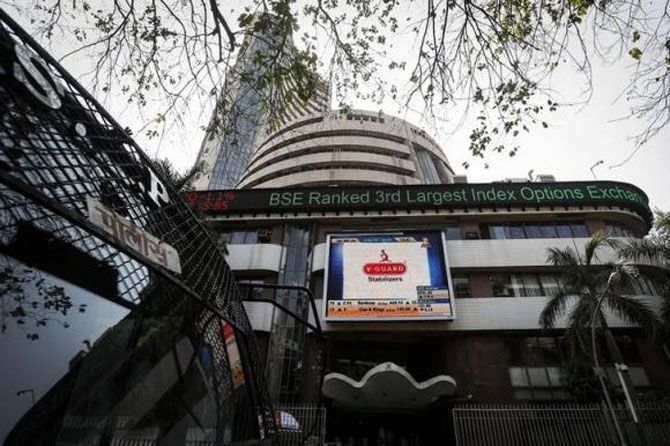 Markets finish the first session of FY15-16 on a firm note led by a strong rally in FMCG, healthcare, realty and financials stocks with Sun Pharma contributing the most to the gains ahead of record date set for the merger with Ranbaxy.

However, technology stocks emerged as the only underperformers in today’s trade after HCL Technologies warned of adverse cross currency impact on the company's revenue and EBIT in Q3 March 2015 in pre-quarter earnings update.

Markets will be closed on 2 April and 3 April on account of Mahavir Jayanti and Good Friday, respectively.

“In the last month, Nifty witnessed decent downside from 9100 to 8300 levels in very short span of time due to this, Nifty has entered in the oversold zone so bounce back is expected.

As buying is continue in the markets from last two sessions which suggest more buying from current levels.

The key point on daily chart is nifty trading above the 100EMA, which gives the positive outlook for coming days.

So, one can initiate long around 8500 levels for the upside target of 8640 in coming days.” said Mudit Goyal Technical Analyst, SMC Global Securities Limited.

On the domestic front, the growth in output of eight core industries, which has a weight of nearly 38% in the Index of Industrial Production, stood at 1.4% in February, a 17-month low.

The Centre's fiscal deficit crossed the Budget's revised estimate (RE) by 17.5%, during the April 2014-February 2015 period.

Brent crude oil futures edged lower as markets kept a close watch on US-Iran nuclear talks and the build-up in US oil supplies.

For India, the decline in global crude oil prices along with deregulation of diesel price announced by the Indian government in October 2014 will help reduce the government's fuel subsidy burden and help contain its fiscal deficit.

However, BSE IT and Teck indices lost sheen and ended down up to 1%.

After a weak start, financials gained momentum in the late noon deals and rallied across the exchanges.

Sun Pharma emerged as the top gainer and surged 4.4% ahead of record date set for the merger with Ranbaxy.

Dr Reddys Lab advanced 1% after it entered into a definitive agreement to acquire a select portfolio of the established products business of UCB in the territories of India, Nepal, Sri Lanka and Maldives.

Bharti Airtel has informed BSE that Mr. Mukesh Bhavnani, Group General Counsel & Company Secretary has resigned from the Company to pursue an assignment outside of the Company.

Engineering conglomerate L&T advanced 1% after securing a turnkey order from NTPC for setting up a 2x660 MW greenfield ultra-supercritical thermal power plant in Khargone district of Madhya Pradesh on EPC basis. NTPC was up 0.7%.

Shares of Maruti Suzuki India dropped 1.4% after reporting 1.6% year-on-year fall in total sales at 111,555 units in March 2015, due to lower sales in the compact segment.

Metal stocks ended in the positive territory after the official Purchasing Managers' Index (PMI) of China released by the National Bureau of Statistics on Wednesday, edged up to 50.1 in March from February's 49.9.

Tata Steel has divested its entire stake in Lanka Special Steels Limited to E. B. Creasy & Company for a total consideration of around Rs 20.4 crore in an all cash deal.

Shares of three natural gas production companies including ONGC and GAIL ended lower up to 1% after the government reduced the natural gas price by 7.72% from today, 1 April 2015.

IT stocks dropped after HCL Technologies warned of adverse cross currency impact on the company's revenue and EBIT in Q3 March 2015 in pre-quarter earnings update.

Shares of fertiliser companies ended higher on reports that the government announced a uniform gas pricing policy and pooling of domestic and imported natural gas for urea plants in India.

The BSE Midcap and Smallcap indices outperformed the large counterparts and were up between 1.5-2.5%.

The market breadth ended firm on the BSE with 2,009 advances against 695 declines.