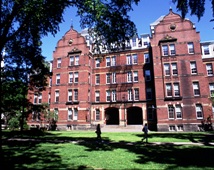 With 62 of its alumni now billionaires, Harvard tops Forbes' list of Billionaire Universities this year, followed by Stanford that boasts of 28 billionaire graduates.

The number of Harvard alumni who are billionaires swelled to 62, up from 54 in 2009, 'more than any other American university by a long shot,' Forbes said.

Prominent among these billionaires is Citadel founder Kenneth Griffin and New York Mayor Michael Bloomberg, who along with oil and banking tycoon George Kaiser graduated from Harvard Business School in 1966.

eBay's Meg Whitman graduated from the business school in 1979, while Apollo Management's Leon Black and Hamilton James of Blackstone earned MBAs in 1975. Stanford University came second on the list of schools that have turned out the most billionaires.

Among its 28 billionaire graduates, up from 25 last year, prominent are Yahoo co-founder Jerry Yang and Google founders Sergey Brin and Larry Page.

Sun co-founder Vinod Khosla and Gap Chairman Robert Fisher were classmates at this California university, graduating with MBAs in 1980, while Nike founder Philip Knight graduated from the Stanford Graduate School of Business in 1962. Columbia University is in third place with 20 billionaire graduates, up from 16 last year.

The university that administers the Pulitzer Prize is famous for educating billionaires such as Warren Buffett.

The University of Chicago boasts of 13 billionaire graduates, up from 10 last year. It ranked sixth on the list.

"Schools with billionaire grads stand a chance to reap benefits down the road," Forbes said.

Home Depot co-founder Kenneth Langone earned an MBA in a part-time programme from New York University, which is tied at 8th place with Northwestern University in the Forbes list with its 10 billionaire alumni.

"Langone later became a heavy donor to the school, and now the programme is named after him, as is the school's medical center," the publication added.