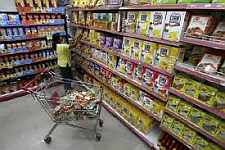 Most of the foreign entities sell or purchase Indian stocks through FII route and the data showed that only five of the 16 large FMCG companies have witnessed a decline in their FII holding in the April-June quarter over the preceding January-March quarter.

Foreign institutional investors' (FII) holding has increased in 11 consumer goods firms during this period, according to a report by A C Choksi Share Brokers.

Domestic institutional investors, on the other hand, raised their holdings in seven companies and reduced stake in the remaining nine stocks during the March quarter.

"FIIs are primarily betting on Large Caps while DIIs are positive on Mid Caps in the sector," the brokerage firm noted.

Emami and Nestle in the quarter.

Experts believe that FIIs have been showing interest in the Indian FMCG companies due to their defensive appeal and attractive valuation.

"FIIs are betting on FMCG stocks because of defensive appeal and these stocks are performing well on earnings front. Another major reason for hike in FIIs ownership FMCG stocks was that these stocks are available at good price," Destimoney Securities MD and CEO Sudip Bandyopadhyay said.

Overall, FIIs stayed away with Indian equity market during April-June quarter and pulled out Rs 1,957 crore (Rs 19.57 billion), after a net investment of nearly Rs  44,000 crore (Rs 440 billion) in the preceding quarter (January-March).

Interestingly, over the past 12 months, FIIs have increased their positions in all the stocks other than Marico, Jyothy Labs, Dabur, United Spirits and Zydus Wellness.

On the contrary, DIIs have been reducing positions in consumer stocks except in Marico, Emami, Jyothy Labs, Dabur and United Spirits over the past 12 months.
Source: PTI© Copyright 2022 PTI. All rights reserved. Republication or redistribution of PTI content, including by framing or similar means, is expressly prohibited without the prior written consent.
Related News: FMCG, FII, United Spirits, Zydus Wellness, Marico
Print this article