Brokerage firm CLSA says in its interactions with government officials, measures such as the dollar-deposit scheme were under consideration.

Orchestrated demands to strengthen the rupee are being put in place even as the current account deficit for the first quarter of this fiscal year widened to 2.4 per cent of gross domestic product, up from 1.9 per cent in the fourth quarter of 2017-18.

The rupee on Friday reversed its seven-day losing streak to close at 71.74 a dollar from its previous close of 72. The latest figures the Reserve Bank of India released show that India’s foreign exchange reserves stood at $400 billion as of August 31.

“Our recent meetings in Delhi in early August had highlighted that the government may plan some measures like a foreign currency bond or NRI deposits similar to that seen in Q4FY13 -- a period of taper tantrum,” CLSA wrote.

Even as NITI Aayog vice-chairperson Rajiv Kumar said the currency should be allowed to find its “natural level”, the brokerage said: “The rupee certainly becomes a political issue running up to the elections and it’s fair to expect some remedial measures from the government.”

Indranil Sengupta of BofaML reiterated the government and the RBI should raise NRI bonds of $30-35 billion if the rupee remained at 70 a dollar into the December quarter without FPI flows reviving.

“In our view, RBI rate hikes actually end up hurting rupee as FPI equity investments that chase growth are 8x of debt,” Sengupta wrote, adding that the central bank would make an intervention of another $20 billion in the currencies markets and buy bonds from the secondary markets.

However, whether a rate hike will happen depends on the inflation path the recent rupee depreciation charts. The rupee has depreciated 11 per cent year-to-date against the dollar, making it the worst-performing currency in Asia and one of the worst in the world.

“When asked (in June) if the RBI would hike rates to defend the currency, the RBI governor stated that ‘monetary policy is determined by the nominal anchor [inflation]’, implying the RBI would hike if depreciation results in upside risks to the inflation target, not otherwise,” wrote Nomura economist Sonal Varma in a note.

Varma expects the RBI to maintain the status quo in its October policy and beyond even as many other economists expect the central bank to hike rates in October.

Currency dealers say the RBI has recently started intervening in the currency market. Till the end of August, the RBI was keeping its reserves at $400 billion, a psychological figure for the markets.

However, as the rupee approached 72 a dollar, the RBI’s intervention started. And this then is interpreted as a level the central bank is keen on keeping rupee at.

Currency dealers say taking a cue from the RBI, technology companies, major dollar earners for the country, have started selling dollars in the forwards markets.

Receiving premiums means taking a fee for a contractual obligation to supply dollars at a particular level at a future date.

Currency dealers say software companies were selling dollars when the rupee was at 68-69, but stopped after that as the rupee started losing against the dollar because in that case they would have to book mark-to-market losses. 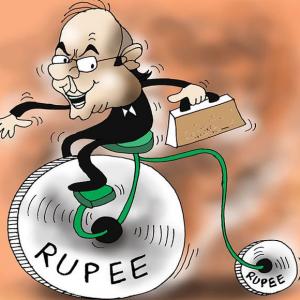