Despite US protest, India wants to raise oil imports from Iran

India's oil ministry wants to raise imports of Iranian crude - even though US sanctions call for a cut - and has argued its case in a memorandum ahead of President Barack Obama's meeting with Prime Minister Manmohan Singh on Friday. 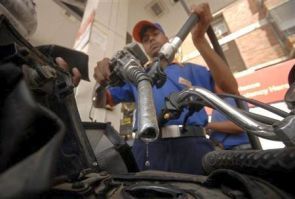 Oil accounts for about a third of India's total imports and higher dollar prices combined with a rupee near all-time lows have increased its cost, adding pressure to a bloated current account deficit.

Oil Minister M. Veerappa Moily is looking for cuts of up to $25 billion in the oil bill and boosting volumes from Iran, which accepts partial payment in rupees even though they are not widely traded, could save foreign exchange outflows.

The oil ministry argues in the memorandum seen by Reuters that imports from Iran could be justified at close to 2012/13's low level of 260,000 barrels per day (bpd) and still win a waiver from US sanctions that is tied to cuts of 15 per cent.

India, together with Iran's other major clients China, Japan and South Korea, has won a waiver from U.S. sanctions that aim to force Tehran to negotiate an end to its nuclear programme.

Sanctions have more than halved Iran's oil exports from about 2.2 million bpd before the measures and cost it billions of dollars a month in lost oil revenue.

Recent rapprochements with a new Iranian leader have prompted the United States to say it is ready to engage in talks "on the basis of mutual respect" with Iran as long as Tehran is willing to demonstrate its nuclear programme is for civilian purposes.

Prime Minster Singh will be in New York on September 27 for a meeting of the United Nations General Assembly at which the United States has said an encounter between President Barack Obama and Iranian President Hassan Rouhani is possible.

But the foreign ministry has suggested India does not want to make Iranian oil part of this week's talks between Obama and Singh.

"I think that on this entire question of purchases of Iranian crude, that is something that we do with Iran. I am not sure that we would want to raise it from our side. If the United States wants to raise it, it is welcome to," the foreign secretary told reporters.

India's current waiver from the sanctions runs out in December.

But domestic refiners could struggle to import the amounts implied by the oil ministry in the year from April 1, 2013 because they have already signed up with other suppliers as financing problems triggered by sanctions hit Iranian imports.

Asia's third-largest economy imports about 4 million barrels per day (bpd) of oil or around 80 per cent of what it uses. Iran ranked ninth among India's crude suppliers in August, down from sixth a year ago.

The oil ministry said in the memorandum that last year's cut in imports from Iran of 29 pe rcent was well below the 15 per cent cut to qualify for a sanctions waiver.

"This option needs to be pursued more vigorously, since it would entitle India to import about (261,000 bpd) of crude oil from Iran in 2013/14," the memorandum said.

But in practice, raising imports from Iran to that level will be difficult.

According to data compiled by Reuters, India has shipped in about 44 per cent less oil from Iran in the first five months of the current contract year starting April 1, or about 141,000 bpd, because of problems securing insurance for processing it.

That would mean refiners would have to step up imports to about 345,750 bpd for the rest of the year. They have already agreed contracts with other suppliers to replace lost Iranian volumes and have little flexibility to switch back.

Data from industry sources and Reuters calculations indicate that instead, India's imports from Iran will run about 190,000 bpd in the year to March 31, 2014.