Employers will now need to furnish detailed break-up of exemptions that an employee has claimed.
Tinesh Bhasin reports.

The Central Board of Direct Taxes has notified changes in Form 16.

Employers will now need to furnish detailed break-up of exemptions that an employee has claimed.

Earlier, employers were allowed to provide a consolidated figure instead of specifying details of each exemption.

In the existing Form 16 (Part B), the employer had an option to provide a description of the exempt allowance.

Consequently, every organisation had created different formats as per their requirements.

The new Form 16 (Part B) has removed this option to write-down the description of exempt allowances.

"Now, the employers have to mention the amount of exempt allowance before earmarked fields. Similar changes have been made in respect of deduction available under Chapter VI-A and losses under the head house property," says Naveen Wadhwa, a chartered accountant with Taxmann.com.

The I-T department has made the changes to ensure that deductions that employees claim are genuine.

"In small organisations, employers tend to be lenient. As the I-T department didn't ask for a break-up, they offered tax deductions to employees based on their claims and without asking for sufficient documents," says Wadhwa.

With the department asking for a detailed break-up, the employer will have to ensure that the claims employee made are genuine. 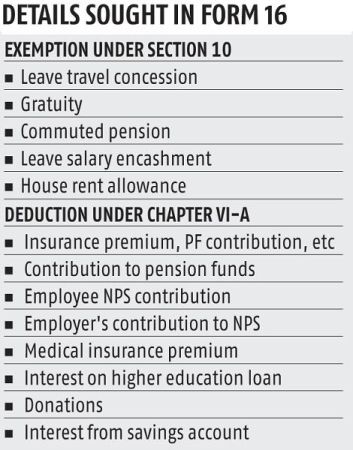 In January 2018, the income tax department had unearthed a scam where chartered accountants filed revised returns with false deductions and exemptions and claimed a refund.

The changes in Form 16 will help curb such frauds.

Following the scam, the tax department had sent notices to those assessees who had claimed deductions other than those present in Form 16 when filing returns.

"The online notice was sent to some who had deduction over and above those mentioned in Form 16. The taxpayer had to log in and give the reason for the mismatch," says Preeti Khurana, a chartered accountant with ClearTax.in.

A similar break-up is also asked in the income tax return forms and Form 24Q as well.

Khurana says the new changes will also make it easier for an individual to file returns on the basis of her/his Form 16.

When filing returns, the individual will also get a confirmation that the deductions and exemptions claimed by the employee in the income-tax return match with the information available in TDS certificate and TDS statement.

All these changes also mean that if there is any additional deduction or exemption that an individual claims while filing ITR, beyond the ones claimed in Form 16, the income tax department would be able to spot the extra claim easily.

Those who don't keep records or proofs of deductions, need to start maintaining proper paperwork now, especially if they claim deductions directly when filing returns instead through the employer for at least six years.

It's likely that the department would like to know the reason why you didn't claim and whether the refund claim is genuine.

Also, it advisable that you claim all deductions through your employer instead of doing it later when filing returns. 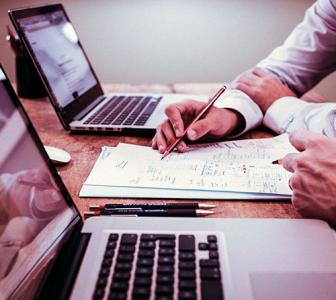 7 questions you must ask your financial planner