Up to 95 per cent of units in the Noida-Greater Noida mega industrial zone are currently shut.

The dust never seems to settle in Noida.

As the infamous north Indian summer sets in, the afternoon haze blocks out the huge, empty residential tower complexes dotting the road between Noida and Greater Noida.

Developers of some of these unfinished properties had last year planned to sell the adjoining plots to the government under a proposal creating two major industrial hubs.

A scheduled opening in May is now out of the question, says Manoj, a tea seller.

He points to rows of trucks laden with building materials, cordoned off and abandoned on the road for weeks now.

Up to 95 per cent of units in the Noida-Greater Noida mega industrial zone are currently shut, according to the sub-divisional magistrate’s office, Noida.

It also leads the state with more than 58 positive COVID-19 cases.

Now, this industrial megacity, priding itself as the Centre’s biggest and most effective export cluster, is looking at major losses.

At its core, the region’s only government-run special economic zone - Noida SEZ - had just seven of the 274 manufacturing units running on Tuesday.

Set on a sprawling 310-acre parcel, the SEZ has sector-specific facilities for thrust areas like gems and jewellery, electronics, and software.

One of the very few landlocked SEZs created by the government, it promised a wave of employment for low- and semi-skilled people of the surrounding hinterland.

“All those people are out of job now. Given the situation, it would be very difficult to reach optimum production levels, let alone these figures, even if the lockdown ends soon,” said Amrit Manwani, managing director of Sahasra Electronics, one of the handful of units that remain open.

A maker of medical electronics, including those for ventilators, Manwani was making the rounds of the district magistrate’s office on Tuesday.

“We employ more than 200 people at two units, but finally managed to get clearance for barely 20 of them. It would be very tough to meet export obligations now,” he said.

Getting shipments out is another major challenge as most international players like Fedex and Gati now say that consignments need to be dropped at the airport, since their trucks continue to face trouble on the roads, he added.

Even pharma, chemicals, and food-producing factories, which are currently allowed full exemption, allege that bureaucratic logjams, and in certain cases corruption, have become the norm to get requisite certificates.

“There was certainly no uniformity in the way authorities are handing out the certificate for necessary businesses,” Sushil Kant Gupta, owner of another running unit, said.

His rubber- and plastic-manufacturing factory managed to reopen after remaining shut for a week.

Many businesses couldn’t track the flood of notifications from central and state industry agencies when the lockdown began.

As industry associations began lobbying, many firms had hoped to secure an exemption. Shashi Kant Mittal, proprietor of Gold Craft International, owns one of the largest jewellery units inside the SEZ.

“I managed to convince some of the key staff to stay back, hoping major forex-earning sectors would be allowed to remain open. But they shut us down,” he said.

Now, 17 of his employees remain stranded on the 2,500-square metre premises.

“Getting food and water is not an issue, but if only I had got my shipment of gas cylinders, polishing work could have been continued,” Mittal, a businessman at heart, lamented.

In posh Sector 59, the corporate headquarters and main distribution hub of Kent RO, which leads the water purifier market nationwide, are locked.

“I have requested the district magistrate’s office that at least our servicing personnel need to be allowed to operate and make house calls, so that broken or malfunctioning water purifiers can be repaired. Still I am waiting for a response,” said chairman Mahesh Gupta.

The situation is worse across the road, in the gritty lanes of Noida’s electronics city, home to hundreds of small-sized components makers.

“The power supply failed a couple of times recently. If the temperature rises a couple of degrees, the chemicals stored at our plant could become a major hazard. We can’t get anyone to move them,” said Manohar Kumar, the lead manager at a printed circuit board making unit.

Amid the chaos, one of the few positive outcomes of the lockdown has been the sudden jump in salaries of watchmen.

This followed a scramble by businesses to hire armed guards to watch over massive, depopulated industrial estates that remain packed with inventories worth millions of dollars. But not everyone is happy.

“I used to make Rs 1,000 a week earlier. Last week, the manager promised me Rs 500 per day, but I am yet to receive a penny,” said a visibly miffed Suraj Lal, alone guarding a massive warehouse filled with garments at an industrial estate on Dadri Main Road. 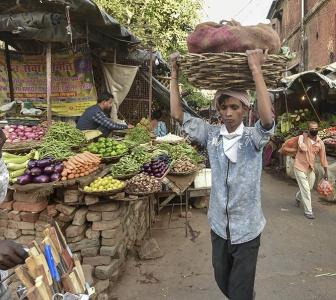 IndiGo has a post-lockdown plan, including no meals COVID-19 hangs over the future like a spectre: RBI