'It is hard to imagine a sector which will not be violently affected by the health crisis, the lockdown and what will come after,' notes Aakar Patel. 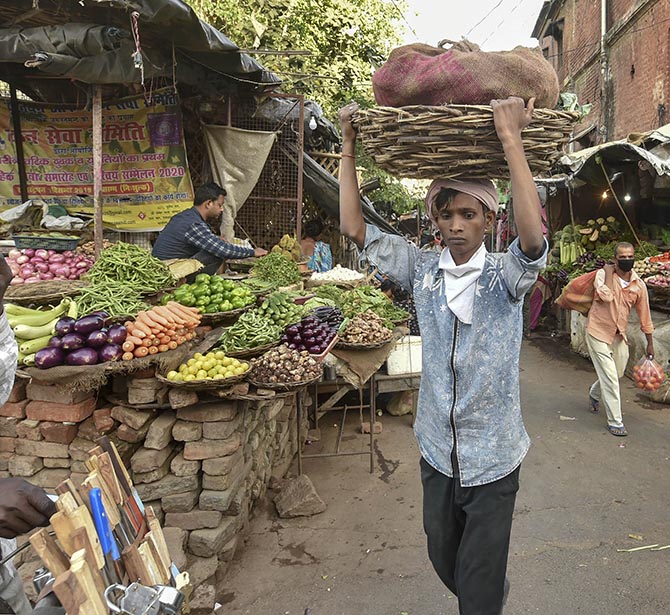 I was speaking yesterday to a friend from Bangalore who has lived in the United States for most of his life.

He is employed by a software firm and his work requires him to travel to India three times a year.

I have known him for about a quarter century and he has been coming with regularity.

It has been his routine and he spends at least 60 days each year in India on work.

However he will not be coming to Bangalore next month, as he was supposed to do, and he does not know when he would next be sent.

Companies and businesses will not put their employees at risk any time soon, especially those firms based in America and Europe.

They have laws which individuals can use if they feel they have been endangered and their safety jeopardised by their employer.

Till there is a vaccine for COVID-19, this situation will remain uncertain.

Of course this will have a impact on the airlines.

Already, there is a ban on international travel pretty much across the world.

No passenger flights are operating in India.

Even when the lockdown is opened in mid April, the number of people flying on work internally will be low and after an initial couple of days when those who are stuck go immediately to where they need to be, the traffic will be lower each month than it was last year.

How will airlines, which operate on very thin margins and sometimes operate at a loss as we have seen in India, manage? They will not be able to and the State will need to decide whether to bail them out (meaning tax payer money to be used on airplane leases and pilot and crew salaries) or let them die.

From a position where India was about to sell its national carrier, Air India, we are faced with the possibility that the government buys stakes in a few more and possibly all airlines.

My friend stays in a hotel in Bangalore and that place will also lose income from business travellers for the foreseeable future.

Restaurants will be hit for the new few months as people will continue remaining home unless absolutely required to be in public spaces.

Similarly, malls and cinema halls and all those sorts of places which have high levels of mingling and crowds will suffer crushing losses of revenue.

How will we cope and what will our new economy look like? We do not know at this point and we will need to learn as we go along.

The chief economist of HDFC bank has written that the cost of COVID-19 to the Indian economy will be $100 billion, or Rs 7.5 lakh crore.

Meaning that either we do not spend on all these things, which is not possible, or we borrow or print the money required to do all this.

It is hard to imagine a sector which will not be violently affected by the health crisis, the lockdown and what will come after.

The sales for cars and automobiles in March were 50% lower in India than they were in March 2019.

This is despite the fact that we lost only about 8 days due to the lockdown that month.

In April the hit will be bigger because half the month is part of the lockdown.

Power consumption was 25% lower this week than in April 2019.

This is entirely because factories are shut down and will lose three weeks of output at least.

After that, they will hope that their workers return from villages and that is not going to happen soon.

There are three or four estimates on what the cost to the Gross Domestic Product of India will be.

The most positive one says that we will lose 2% points of GDP growth.

The most negative says we will lose 4%.

The truth is that nobody knows at the moment what will come in April and May, just as nobody anticipated in February that March would turn out the way that it did though the coronavirus story was already in the headlines then.

It will occupy the world for the rest of 2020 and perhaps even beyond that and will have medium and long term ramifications.

The short term ones, the ones that we have described above, are immediate and visible.

But there will be others, especially on the future of the global economy, that may impact us for an entire generation.

Because we are currently in the middle of the immediate health crisis, there has not been much discussion of this so far but it will start soon.

It is a very difficult task ahead for the prime minister and for the nation, even after the lockdown ends.