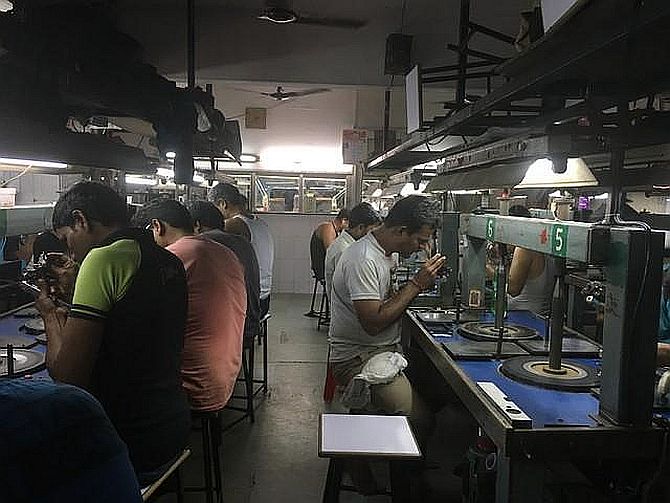 Liquidity crunch due to financing cuts by banks leading to cutters and polishers reducing purchases has resulted in India experiencing the steepest decline in net rough diamond imports in 2019 so far.

According to the report by Bain & Consulting, net import was down by 32 per cent.

According to the latest Bain & Consulting report on the global diamond industry in 2019, weakened local currency, liquidity issues resulting from bank financing cuts, and ongoing effects of demonetisation contributed to stockpiling of incoming goods in India.

"The combination of lower polished diamond sales and excess inventory accumulated by the midstream in 2017 and 2018 reduced net imports by 3 per cent and 30 per cent in 2018 and 2019, respectively. India experienced the steepest decline," the report states.

As against an estimated five per cent decline in net rough diamond imports by China over the previous year, in India, net imports of rough diamonds decreased three per cent in 2018 and 32 per cent in the first eight months of 2019.

Yet, India continues to dominate the cutting and polishing industry with a 90 per cent net import of rough diamonds globally as compared to five per cent by China and another five per cent by rest of the world.

On the contrary, India's net rough diamond imports had grown by 11 per cent in 2016-17 against the previous year.

The decline has been accentuated by Indian banks adopting a more conservative approach following the poor performance and challenges of the Indian financial sector at large.

As a result, cutters and polishers in India, where 9 out of world's 10 diamonds are polished, reduced rough diamond purchases by about 30 per cent to off-load inventory and improve their cash flow.

Moreover, available financing for midstream players decreased by $5 billion since 2013.

"This 30 per cent decline in financing impacted the ability of manufacturers to support the growth of their operations.

Industry experts in India opine the lack of demand globally led to both miners and polishers rationalising sales and purchase of rough diamonds.

Apparently, with roughly 94 per cent of imported rough diamonds being cut and polished for exports from India, the sluggish global economy had led to fall in demand and, therefore, margins for cutters and polishers from India.

"What has really affected is lack of demand internationally and lack of financing.

"Either the miners reduced their less or Indian manufacturers purchased less but imports fell as production did not match demand. In the beginning of the year we were losing money since last Diwali but now we are breaking even.

"This is because the market has been brought into equilibrium," says Anoop Mehta, director of Mohit Diamonds and president of Bharat Diamond Bourse (BDB).

In volume terms, rough diamond supply growth is projected to be negative two per cent or zero per cent annually.

Demand for mined rough diamonds is expected to recover, either staying flat or growing up to 3 per cent annually through 2030.

In fact, Mehta believes that whenever the global economy turns around, there will be an opportunity in 2020 for Indian diamond industry to bounce back.

"Production is now matching demand. If the world economy does well, we should be able to come back into profitability," he adds. Link your PAN to Aadhar by December 31!