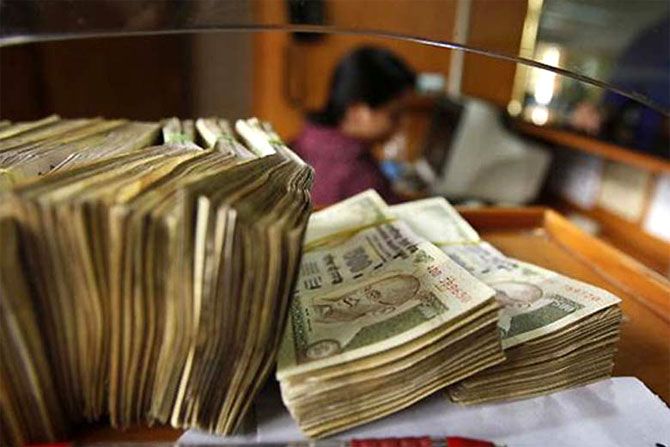 Indian banks are staring at a deposit erosion of Rs 1.5-2 lakh crore between September and November as foreign currency non-resident deposits (FCNR) mobilised in 2013 mature around that time.

This could result in an acute liquidity shortage and a possible de-growth of balance sheets.

At the deposit growth rate now, banks mobilise roughly Rs 2.4 lakh crore of deposits in three months. To maintain the same growth, banks will have to raise at least Rs 4 lakh crore in those three months.

“The liquidity impact to be felt by banks around the maturity time could be significant,” said Indranil Pan, chief economist at IDFC Bank.

Banks have started preparing for the outflow. Some are even planning to raise deposit rates around that time to replenish their books. This is despite the Reserve Bank of India (RBI) getting ready to provide liquidity support and extend special measures to nullify the shortage.

The central bank might even announce some measures in its April 5 policy review, or at least communicate to the market its preparedness for supporting the liquidity of banks, as lenders have asked the central bank to assure the market that all would be well.

The central bank has also built up a formidable long forwards position in dollars for that time — $21.15 billion in more than three months and up to one year segment that can be used to honour the pay-outs. The central bank’s short position then would be $24.67 billion, indicating RBI was ready to infuse enough dollars to avoid exchange rate volatility.

Of course, not the entire amount would be used for FCNR transactions. State Bank of India economist Saumya Kanti Ghosh said the dollar outflow to be at least $15 billion in September-November due to the FCNR pay-out.

“RBI will have to come up with some counter-balancing liquidity infusion, or at least communicate about it clearly, so that the market does not keep guessing,” said Ghosh.

Gaurav Kapur, India economist at RBS, said the central bank would probably have to do more open market operations to ease rupee liquidity. “This is not much of a systemic liquidity issue but this is not frictional shortage either.  Hence, RBI will have to do more long-term infusion of liquidity,” said Kapur.

Between September and November of 2013, foreign, private and public banks had mobilised $27-28 billion through FCNR deposits and $6-7 billion through tier-1 capital route. Though these deposits are chased by banks all the time, the mobilisation was zealously pursued in 2013 as RBI took the responsibility of hedging the currency risk. Banks raised the deposits, offering attractive rates to depositors, and swapped the resultant foreign currency with RBI.

Banks' deposit base to take Rs 1.5-2 lakh cr hit Some foreign banks even offered loans for these deposits in their overseas branches so that customers can deposit their money with the Indian branch of the bank. As a result, the volatility in rupee was arrested as it recovered from its record low of 68.87 a dollar reached on August 28, 2013.

Though exact numbers are not available, private banks mobilised most of the deposits. Analysts say HDFC Bank raised about $3.5 billion, ICICI Bank, Axis Bank and State Bank of India raised about $2 billion each.

Foreign banks and some other large public sector banks with overseas presence mobilised at least $1-2 billion each through the scheme. Rest were raised by banks that have a captive NRI base repatriating money home.

Vaibhav Agrawal, analyst with Angel Broking, said banks could see some de-growth in their deposit numbers around the maturity period.

Though bankers are of the opinion this will not lead to a huge challenge, they do anticipate some trouble arising out of this outflow.

“We do not anticipate a huge problem due to this outflow but considering that the amount is large we will have to wait and watch,” said the treasury head at a large private sector bank. He added RBI’s forward position indicated the regulator was already working on it to ensure there was no system-wide challenge. Some bankers were more confident of a limited impact. Ashutosh Khajuria, Executive Director, Federal Bank, said his bank wouldn’t see a huge impact.

"Considering that banks are already aware of the situation they will start deposit mobilisation in the run up as well. The banking system has been facing challenges with credit growth but deposits haven't been much of a challenge so I believe banks will be in a position to manage the outflow," Khajuria said.

A senior official with a large private bank said deposit rates could harden in the second half.

"In order to counter the outflow, there may be a temporary bump in deposit rates that banks may undertake to boost their deposit bases. Apart from this, since most of the fund is leveraged and it will end up out flowing to the overseas branches of the banks and so we will see the international branches lending to the domestic branches to manage the mismatch," said the head of treasury at a private bank.

The deposits, which were mostly in the three year segment, and some extending up to five years, are due to mature this year between September and November and bankers are a little nervy.

According to banking sources, discussions on how to neutralise the impact have already started and once the new year kicks in, banks' asset liability committees will be busy doing their math on how to replenish the deposit base by raising money from the domestic market so that the balance sheet does not show a de-growth.