The ongoing strike at Maruti Suzuki's Manesar plant entered its sixth day today, with no production taking place at the unit, as workers continue to demand that the management take back all suspended and casual employees. 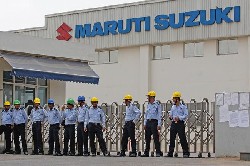 The strike by workers at Suzuki Powertrain India Ltd (SPIL) and Suzuki Motorcycle India Pvt Ltd (SMIPL) in support of their colleagues at Maruti Suzuki India's (MSI) Manesar plant has worsened the situation.

"The plant is still captive in the hands of striking workers. There is no production today also at the Manesar plant," a company spokesperson said.

The company has been hit hard, not only by strike of its own workers, but also due to the supply shortage of engines and transmissions from SPIL.

MSI's production is now heading toward a complete halt, with its main unit in Gurgaon rolling out 64 per cent less cars on Tuesday than the normal daily output of 2,800 units due to parts supply constraints caused by the strike at SPIL.

On October 10, the Haryana Labour Department slapped a notice on workers for "breach of settlement" in connection to the agreement that was signed on October 1 to end the 33-day-long impasse and asked them to respond within the next 48 hours.

On the other hand, all big national trade unions cutting across party lines -- AITUC, CITU, HMS, INTUC, BMS, AIUTUC, TUCC, AICCTU and UTUC -- lashed out at the company management, accusing it of "high-handed provocative activities" and said not allowing casual workers to join duty is "an absolute act of vengeance".

The series of strikes at the Manesar plant since June this year has resulted in excise revenue losses to the tune of nearly Rs 350 crore (Rs 3.5 billion) for the government, while the company has already suffered a hit of up to Rs 1,540 crore (Rs 15.4 billion), with a total production loss of 51,375

Because of the strike, exclusive component suppliers to MSI fear heavy losses during the festive season and have sought the intervention of Haryana Chief Minister Bhupinder Singh Hooda, who along with his ministerial colleagues are busy with the Hisar by-elections on October 13, to help resolve the issues.

Workers at MSI's Manesar plant went on a stay-in strike on Friday afternoon, completely affecting production at the plant. The number of workers who went on strike was around 2,000, including regular and contract employees, apprentices and trainees.

The number, however, came down to about 1,500 after the company "rescued" some workers, who were "held under duress".

The company alleged that the striking workers attacked co-workers, supervisors and executives in multiple incidents of violence and damaged factory properties inside the plant. The workers, however, denied any such acts and said they were "manhandled by company bouncers".

They have gone on strike, demanding the reinstatement of over 1,000 casual workers and 44 permanent employees, who were suspended during the standoff that started on August 29.

On Sunday, MSI dismissed 10 workers, terminated five trainees and suspended 10 employees in connection "with the strike and violence at the Manesar factory premises".

As per the agreement reached on October 1, the company had agreed to conditionally take back suspended 18 trainees.

The workers, in turn, had agreed to sign the 'good conduct bond', which said they would "not resort to go-slow, intermittent stoppage of work, stay-in-strike, work-to-rule, sabotage or otherwise indulge in any activity, which would hamper normal production at the factory".
Print this article Seven billionth person will be born on Oct 31 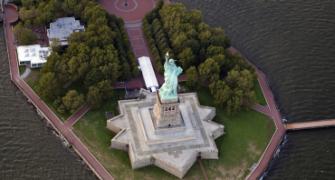 What do super-rich Americans own? Nearly the whole country! 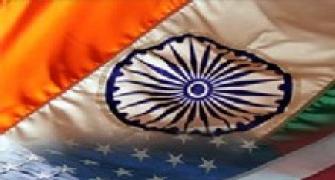