The company shut its factory on June 3, which ironically was also World Bicycle Day. It laid off its 431 remaining employees, but the company insists they continue to be on its rolls and will be paid "lay-off wages" upon marking attendance daily.

IMAGE: Workers shout slogans during a protest outside the factory after the manufacturers of Atlas Cycles shut operations due to financial constraints, on June 4, 2020. Photograph: Arun Sharma / PTI Photo.

Atlas Cycles -- a name that became a synonym for bicycles in India -- has shut its last manufacturing unit in Sahibabad, just outside the national capital, citing lack of funds to run the factory.

Its CEO N P Singh Rana, however, insists the shutdown is only temporary, and the company will resume operations once it is able to raise around Rs 50 crore by selling surplus land.

The company shut the factory on June 3, which ironically also happened to be World Bicycle Day. It laid off 431 remaining employees, though Rana insists they continue to be on the roll of the company and will be paid "lay-off wages" upon marking attendance daily.

While he did not elaborate on the payment to employees, "lay-off wages" typically equal to 50 per cent of basic salary and dearness allowance.

The plant, the biggest in the country, started in 1989. It was the last operational plant of the Atlas cycle with a monthly production of over two lakh bicycles.

Employees claimed the unit was shut without notice.

On Wednesday, a notice was pasted on the factory gates that read: ‘... the company had been passing through a financial crisis for several years and had exhausted all its funds to keep the factory afloat. But now, there are no funds left. We are facing difficulty in arranging funds for our day-to-day operations. We are also unable to buy raw materials. In these conditions, the management is not in a position to operate the factory."

However, the laid off employees have been asked to mark attendance except on holidays, failing which they would not be entitled to any lay-off entitlements.

The company started making losses in 2014 and its first plant in Malanpur was shut down in December 2014. The losses continued to mar the growth and its second plant in Sonepat, Haryana, was also closed in February 2018.

The Sonepat plant was the first unit established in 1951 by Jankidas Kapoor. Starting from a modest tin shed at Sonepat, Atlas Cycle Industries Ltd catapulted into a 25-acre factory complex in just 12 months.

It soon became India's largest bicycle manufacturer and was the official supplier of bicycles to the 1982 Asian Games held in the national capital.

The financial crunch it faced since 2014 turned from bad to worse in the last one-and-a-half years and the coronavirus lockdown only compounded it.

"We have not closed down the plant. In fact, there has been a lot of misinformation... The plant is very well open, we have not terminated any employee. We have only temporarily suspended the operations," Rana told PTI.

The company had on June 2 informed bourses the Sahibabad unit of the company is not in a position to resume manufacturing operations due to financial constraints.

Hence, the workforce of the Sahibabad unit of the company will be laid off with effect from June 3, 2020, till adequate arrangement of funds is made," Atlas Cycles had said in a regulatory filing.

Explaining the situation, Rana said, "All the employees are on the rolls of the company... Laying off does not mean that people have been terminated or their employment is discontinued. Laying off is a provision in the law where people are required to come once in a day to sign their attendance... So currently they are on the rolls of the company and they will continue to get their employment. They will get the lay-off wages for their period."

He said the worker's strength at the plant was 800 in 2017 but the "finance situation was getting from bad to worse in the last one-and-a-half years, presently we have laid off only 431 employees".

Commenting on the road ahead for Atlas Cycles, he said, "We have already put up an application to the NCLT seeking permission to sell our surplus land. Once we get the permission, we will sell off our surplus land and the surplus land money will be much higher to pay back all the dues of suppliers and our people and we will resume production."

When asked how much fund the company was looking to raise by selling surplus land, Rana said, "We have a lot of land bank. We are only looking for a small fund to run the day-to-day operations. We are just looking for Rs 50 crore at the moment."

On the expected timeline for resumption, Rana said it is difficult to say as "NCLT has given us a date for June 18. As soon as we get permission we will advertise to sell the land and as soon as we get the funds from the prospective buyers we will resume production."

The Sahibabad unit has an installed capacity of 40 lakh units per annum. However, the company was producing about 1.5 lakh to 2 lakh bicycles per month, he said.

Started in 1950 from Sonepat, Atlas Cycle grew to emerge as India's largest cycle manufacturer in 1965. It even ventured overseas and became one of the top bicycle producing companies in the world with a capacity to produce 40 lakh bicycles per year.

However, as the mode of mobility changed with the advent of automobiles, Atlas Cycles began to face headwinds, which came to a head recently.

"We have not been able to sustain and we are not able to gather funds to continue our day-to-day operations. So we put the operations (at Shahibabad) in suspension for a very temporary period," Rana said, adding, "The coronavirus pandemic was another blow to us".

He, however, said the company has not given up.

"Demand is not a problem, the market is very good. We have a very strong dealer and supplier base. We are a 70-year-old brand and very well accepted in the market. We will bounce back," Rana insisted. 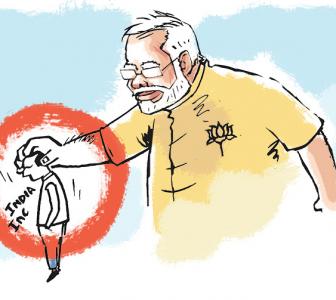