'China's investment destination image the world over has taken a beating, therefore investors feel India is a safe haven for investments.'
'FDI is at an all-time high in India.'
'Now after such poor ratings, this FDI amount will fall.'
'Therefore, I am saying these things are happening at China's behest.' Nishikant Dubey -- the Bharatiya Janata Party member of the Lok Sabha who represents Godda in Jharkhand -- has urged Prime Minister Narendra Damodardas Modi to take immediate action against global rating agencies Moody's, Fitch and S&P, and has accused them of trying to destabilise India's economy as part of a Chinese conspiracy.

'Baa3' is the lowest investment grade, just a notch above junk status.

"Lockdown is all over the world, but why are these rating agencies targeting India alone?" Dubey asks Rediff.com's Syed Firdaus Ashraf.

Are you saying these rating agencies are working at China's behest to give India a bad name?

These rating agencies are financed by China. And right now, in the post-pandemic world, China is worried that most companies will pack up and come to India.

In this scenario, if India is given a lower rating, then the investment cycle in India will slow down.

Lockdown is all over the world, but why are these rating agencies targeting India alone?

They have lowered the ratings of other countries too.

Those are small countries. And these countries are not a threat to China.

It is only India which is a threat to China.

China's investment destination image the world over has taken a beating and therefore investors feel India is a safe haven for investments.

FDI is at all-time high in India and now after such poor ratings (by Moody's) this FDI amount will fall.

Therefore, I am saying these things are happening at China's behest.

I had flagged this matter earlier, even before the rating agencies reduced India's rating. And since they did as I had predicted earlier, I am proved right.

But companies shifting from China are going to Vietnam and Indonesia, and not coming to India.

Nobody is going anywhere right now. It will take six months to dismantle businesses from China.

And in such a scenario, the grading by such agencies matters a lot. Because they decide which country is safe to invest in and which is not.

Obviously, any investor would want to invest money in a country which is safe. Now, all of a sudden the news of downgrading India's status creates a fear psychosis among investors that their money is not safe in India.

And this is happening at a time when FDI is at an all-time high.

Do you feel there is a plan to bring India's standing among investors into disrepute?

People invest in China because they have cheap labour. They are getting the population dividend. The only alternative can be India.

And if you downgrade India, then India does not become a competitive market compared to China.

This is happening after 21 years, that India's status is being downgraded.

It is a reality that jobs are being lost and salaries are being cut of employees across all sectors.

On the ground India's status economically is bad.

These rating agencies are private bodies, so why should we depend on them?

Russia and China do not allow these rating agencies to interfere in their economies and they have been thrown out of those countries.

Is that why you are demanding they should be thrown out of India?

When these rating agencies were not in India, were we not growing or getting investments into our country?

Isn't your call a sign of dictatorship? We are a democratic country unlike China and Russia.

There are two systems. Basel Committee on Banking Supervision (external link) and International Financing Reporting Standards (external link). They report on and keep a check on the liquidity and lending of banks.

These are private bodies and our banks are structured according to their norms.

The agreement (with them) was signed (by the Reserve Bank of India in 1992) under Dr Manmohan Singh (then India's finance minister).

The other countries which signed the agreement have in reality kept themselves out of their norms.

Now when you know that other countries which signed these norms kept themselves out of it, our government should have thought well before signing up, isn't it?

See the WTO information technology agreement which India signed in the 1990s.

At that time we had no idea that mobile phones or computers will become such a big thing in the future. Without knowing this fact, we signed the agreement.

Today, when we try to raise import duties on these electronic goods there is a hue and cry all over the world.

But we had to do it because India was a part of the WTO. We got access to world markets just like other countries got access to Indian markets.

China signed this in 2001, at a time when they were sure they could compete in world markets.

Therefore, I am saying the government must take a stance against these rating agencies as it is all about investments and creating jobs in India.

Since I am not in the government, I don't know the pros and cons of these issues.

But you are a ruling party MP, you can always voice your opinion to your government.

I am not in the government but a party member, and this is my suggestion. This is an individual suggestion and not as a minister.

Many people feel the fundamentals of India's macro economy have weakened, which is why the poor ratings.

India's macro economy is strong and it will grow. We are showing 4.2% GDP growth.

That is for the last quarter (January to March 2020). And this figure too is good compared to other countries.

Indian economic fundamentals are strong. Therefore, we need to shut the shop of companies like Moody's.

But they have a standing in the world. And they have a track record for getting it right.

I am only giving a suggestion. I also gave the example what other governments are doing.

To take a decision on them is the government's job. 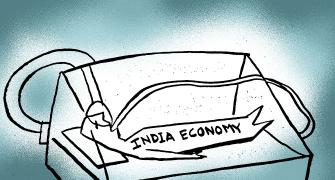