News
Business
Movies
Sports
Cricket
Get Ahead
Money Tips
Shopping
Sign in  |  Create a Rediffmail account
Rediff.com  » Business » Apollo to scale up IT's role in services

Apollo to scale up IT's role in services 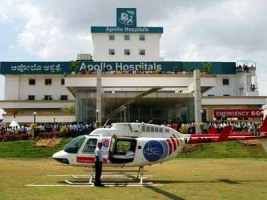 The Apollo Hospitals Group is planning to scale up its Hospital Information Services system Med-Mantra, which it has developed in collaboration with the Tata Consultancy Services, across all its hospitals covering 9,000 beds, in the next 12-18 months.

It also expects to roll out technologies as part of eHealth and mHealth in the next 12-18 months.

Announcing that the Apollo Hospitals, Chennai, has bagged the HIMSS Analytics Asia Pacific Award for its IT capabilities, Sangita Reddy, executive director -- operations, Apollo Hospitals Groups, said, “We will have 6,000 beds covered with the system and capabilities by the end of the year and in another six months from that all 9,000 beds of Apollo Hospitals will be covered.”

At present Med-Mantra has been implemented across 17 Apollo Hospitals and 42 clinics.

Besides, in six more hospitals the system is under implementation and the company is expecting that by the end of the current fiscal, it would be able to touch about 6000 beds.

The Med-Mantra would help the hospital group to integrate the data under a system which avoids possibility of human error, since the tests and feeding of information are automated.

This would allow it to store the information on electronic format. The data could then be offered as an electronic patient health record, to the patients for future treatments and check ups.

The company has a tie up with Health Highway, a back end service provider for the service, for PHR.

It also has tie up with Oracle and HP related to the IT initiatives.

Besides, the company is expecting to roll out technologies exploring the possibilities of the mobile phones and similar devices to help the patients and the doctors.

The doctors would be using a series of devices, whether it is the iPad, a smart phone, to be able to log into their patients records treat or give inputs from anywhere in the world at any time, and all this will be validated by the company’s internal securities.

“I would say next 12 months will see us rolling out solutions which include that as well as wearable devices by patients,” she said.

For instance, the patients might be on the golf course, wearing their heart monitoring meter, connected into the hospital ecosystems, and a monitoring station enabled by doctors and nurses with protocols would be monitoring them.

If anything happens the hospital can give an immediate alert and simultaneously may be send an ambulance.

The company is already conducting a pilot study in which it is already doing telemedicine service over the mobile phone.

“These scenarios which were futuristic one-off pilots will become mainstream everyday activity and I see this happening in the next 12 to 18 months in our ecosystem. But we have not gone into business plans,” added Reddy.

The stage six award, out of the total eight stages, shows that the company has implemented a complete electronic medical record system with standards, from physician documentation to drug dispensing in pharmacy.

Reddy added that only 2.4 per cent of the hospitals in Asia Pacific and seven per cent out of the total 8,600 hospitals which have been tracked by HIMSS has received the award so far.

She also claimed that Apollo Hospitals is the first and only Hospital to receive this award in India, at present.