All Indian villages to have high-speed broadband in 3 years 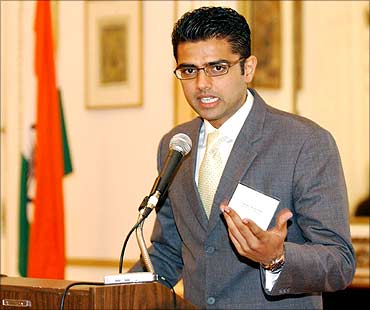 From a teledensity (number of phones in use for every 100 individuals) of just 1.4 per cent in 1995, India today has reached a teledensity of over 50 per cent, with big cities like Delhi, Mumbai, Kolkata, Bangalore, etc going up to 130-140 per cent, same as in Europe and North America.

These facts were shared by Minister of State for Communications and Information Technology Sachin Pilot at a media briefing in Toronto on March 31.

"But in rural India the teledensity is still 18 to 20 per cent," Pilot said. "Within the next three years, we will connect every village in India with high-speed broadband access."

The government has decided to connect "tribal areas, border areas, north-eastern parts of our country, Kashmir valley, the sparsely populated areas; we are going to put up 11,000 towers to improve communication facilities," he said.

"It is important that every Indian living even in far off areas has a right to be equal partner in the IT revolution," Pilot said. "This revolution must not be limited to Delhi, Mumbai, etc. It has to be available all over the country -- the infrastructure, resources, facilities at cheapest possible rates and best quality -- and that's where the government comes in."

Pilot also wants to revolutionize Indian post offices by incorporating services like train and bus tickets bookings, e-bill payments, passport renewals, etc, so that even the rural ones play a broader role and the institution becomes profitable.

He said, "I am here not to sign any MOU (memorandum of understanding), but to encourage (Canadian) companies (to invest in India).  I want to ensure that people know the right facts about changes happening in India, the potentials that exist not just in India, but from India."

"India is now turning itself into a knowledge economy," he added. "We are putting a lot of money into higher education, making sure that there's connectivity between research labs, universities, libraries, institutions. We are opening up our education sector for foreign institutions."

This knowledge, Pilot said, "is going to drive the next 50 years in India."

He also visited the Research in Motion offices (makers of BlackBerry) in Waterloo, Ontario, and attended a lunch at The Indus Entrepreneurs Toronto and a dinner hosted by the Canada-India Business Council.