News
Business
Movies
Sports
Cricket
Get Ahead
Money Tips
Shopping
Sign in  |  Create a Rediffmail account
Rediff.com  » Business » 'You can keep locking down endlessly, but what will you do at the end of it?'

'You can keep locking down endlessly, but what will you do at the end of it?'

'We haven't flattened the infection curve, we may have merely smoothened it temporarily.' 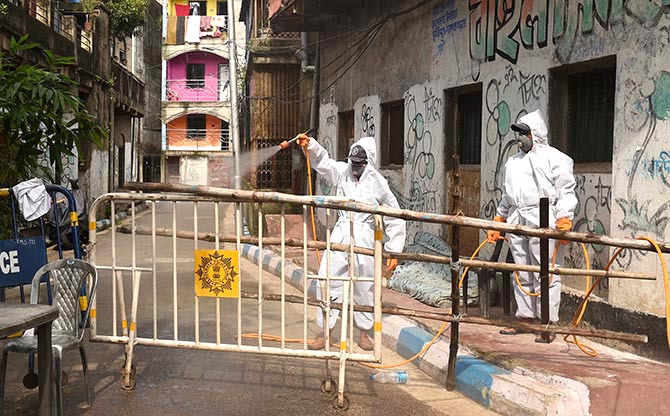 Bajaj Auto's plant in Waluj, Aurangabad, has seen an exponential rise in the number of COVID-19 cases with three of its employees succumbing to the disease.

Rajiv Bajaj, managing director, Bajaj Auto, tells Shally Seth Mohile the numbers going up is inevitable, not only at Bajaj Auto but everywhere, with the unlock.

Bajaj, who has been vocal about the perils of the lockdown, says the states should not o;t repeat the mistakes with more of it.

Among auto units, your Aurangabad factory has seen one of the highest numbers of infection. Yet you have maintained it is not large.

140 cases in our factory is not a high number.

In any large organisation, in all probability, 5 per cent may be already infected, but they are largely asymptomatic and, hence, not tested.

This is the truth that needs to be told if we have to live with the virus.

We have been meticulous. Every person who comes on a bus has his seat with his name on it.

We know who sat where and next to whom. For us, every employee's safety is of paramount importance.

The number of cases we have reflects the fact that at the slightest hint of an infection, we are testing and isolating people.

Epidemiologists have gone hoarse saying that eventually 60 to 70 per cent people will be infected, and, with that herd immunity only, the virus will stop.

Experts have predicted 200,000 cases per day in India.

How long can you keep blaming the execution? Is it not right to ask whether the idea to lockdown was right in the first place?

Reportedly, the first two employees who died had comorbidities. Was there any lapse in following the protocol?

There were no lapses. One of them had borderline hypertension and the other had mild diabetes.

If someone has blood pressure of 140/90, while some doctor will prescribe pills, another will treat it as normal.

The fundamental logic is your immunity should be strong.

So, if someone is mildly diabetic or hypertensive that's not an issue.

Some 30 per cent people in India are diabetic and hypertensive. So can you keep them at home forever?

These people were young and healthy. In fact, one wasn't even hospitalised.

The doctor didn't even recommend hospitalisation because his symptoms were mild.

The second one was in general ward, not even on oxygen.

Unfortunately, this is what happens in coronavirus -- deterioration is very fast.

You have been trolled for your views on the lockdown. Does it upset you?

Unfortunately for them, I am not on any social media. So I am blissfully ignorant!

The issue is not with the lockdown, but continuing to perpetuate the false theory.

The issue is that India is seeing cases spiral after the lockdown. Not only cases, but deaths as well. This is not the case with other Asian countries.

Until a week or so back, Japan had fewer than 1,000 deaths, Thailand fewer than 100, and Vietnam, despite its densely populated cities, zero.

So the way forward is not what we have done in the past.

Is there pressure from the district authorities to shut the plant for a few days?

Not at all. They have all been understanding and supportive.

On the contrary, the collector has said in interviews that Bajaj Auto has followed all the norms.

It's not about Bajaj Auto alone. The cases are everywhere.

Do you think the lockdown is a mistake?

My only contention is, don't keep repeating the mistake.

Tamil Nadu is locking down for another 11 days, Guwahati for 14 days, West Bengal is extending it till July 31.

You can keep locking down endlessly, but what will you do at the end of it?

As the Swedish chief scientist Johan Giesecke said, when you lock down, you need to be clear on what basis you will unlock.

The defining characteristic of this pandemic is that unknown to them, the asymptomatic wait silently to infect the vulnerable whenever you unlock.

..But without a lockdown, how does one contain the spread?

I don't agree. In some areas in Pune, people are locked down for three months.

Let's assume it is a price worth paying, but when will you unlock them?

Either they say after a year, when the vaccine comes, I will.

In that case, tell them sit at home for a year.

This is my issue with the logic of hotspots and containment zones.

How about the unlock?

Even after unlocking, nothing changes and they continue living in densely populated areas.

To reiterate, I am not saying more people are getting infected because of the lockdown.

But it seems to me that whatever has to happen will happen and the average will be the same.

We haven't flattened the infection curve, we may have merely smoothened it temporarily.

Is there fear or resistance among the employees about showing up at the factory?

Not at all. We have been regular and correct in our communication.

They deeply appreciate that we didn't effect any layoffs or cut wages even when the union offered a voluntary reduction.

They know that we have scrupulously put all precautions in place and even distributed homoeopathic remedies free to them, their families, and to the community at large.

They (employees) know that since Unlock 1.0, cases have been rising all over India.

From April 25 to June 5, there was not a single case in our plant in Aurangabad.

They know that with the unlocking and free movement within the city, inevitably infection will happen and there is no vaccine.

We have told them very clearly, there are two choices -- if they want, they can wait for the vaccine and sit at home for one to two years.

But those of us who chose that option cannot expect to get paid.

There is no company in the world I know which can pay for that long.

Fortunately, there should be no danger of that because the people who have made Bajaj Auto the world's favourite Indian know how to both work hard and work smart. 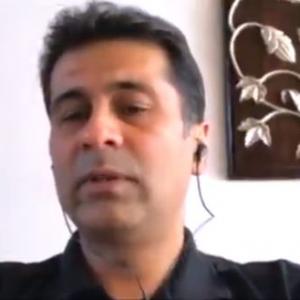