'There has to be an 18-month transition.'
'But if the government had some prior knowledge that the high value notes were being used for an imminent terrorist activity in the country, then we have to accept the step.'
Anil Bokil explains the math behind his idea to Anup Roy. 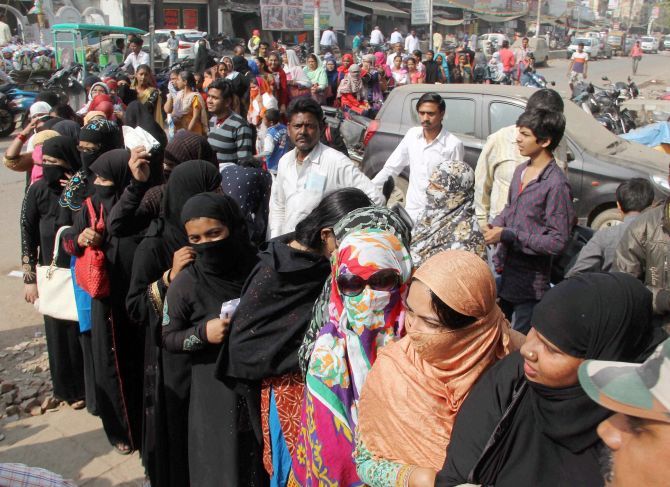 On November 8, when Prime Minister Narendra Modi stunned the nation by stating that the existing Rs 1,000 and Rs 500 notes will no longer enjoy the legal tender status, members of a small advocacy group Artha Kranti Pratisthan in Pune rejoiced.

The nation seems to be heading towards the path the group's founder Anil Bokil has been pushing for more than 16 years.

Bokil and his team, most of whom left well-established careers to be part of the movement to 'eradicate black money' in the Indian economy, met all senior politicians, policymakers, central bank officials, bank officials, religious leaders from all faith, and anyone who cared to give them time -- not to mention holding public awareness campaigns through the length and breadth of the nation, to push for their radical ideas.

In subsequent interviews with the media, the group claimed credit for the banning of high value note, as they had met the prime minister several times, most recently in February 2016, pitching for their idea of steps that should be taken for 'India's economic rejuvenation.'

The rejuvenation plan is so simple and radical that it can be passed on as utopian.

Yet, members of Artha Kranti are passionate about their economic philosophy and have dedicated their lives to further the cause.

Not only that, the group members say the plan has convinced senior BJP leaders like Home Minister Rajnath Singh and External Affairs Minister Sushma Swaraj.

The group advocates abolishment of all taxes, scrapping high value notes, setting an upper cap for cash transactions and forcing everyone to transact through the banking system, and pay a transaction tax.

Professor Hrishikesh Vinod, director of the Institute for Ethics and Economic Policy at Fordham University, New York, in his book Handbook of Hindu Economics and Business, has dedicated one full chapter to Artha Kranti.

Time has thrown the spotlight on 55-year-old Anil Bokil and his activities -- the engineer turned philanthropist, and self-proclaimed economist -- and the media from all over the world are scrambling to get a slice of him.

Business Standard travelled to Pune on the same allure. Bokil, tall and slightly gaunt, chatted at a tea shop and then at his one BHK rented apartment, which also doubles up as Artha Kranti's office.

Bokil says his idea is based on Kautilya, the famed Mauryan era economist and policymaker.

"According to Kautilya, tax collected should be like a honeybee collecting nectar from a flower. You should not harm the flower at any cost. Instead, you exchange and pollinate," said Bokil, sipping his cutting chai.

As he went on explaining his ideas about economics, visitors dropped by to say hello. One young person waited patiently for the interaction to be over to take a selfie with Bokil.

"Most of these young guys didn't even know my name a few days back," Bokil chuckled as we talked more about his views on scrapping of high value notes and the ensuing hardship witnessed by people.

There is chaos outside banks and ATMs, some people have died standing in the queue, and cash-driven economic activities have come to a near halt.

"This is temporary. But let me say we are not responsible for all these. Artha Kranti never suggested overnight banning of high value notes," Bokil said.

"There has to be an 18-month transition. But yes, if the government had some prior knowledge that the high value notes were being used for an imminent terrorist activity in the country, then we have to accept the step. I am saying accept, not that this is what we preferred," he said.

"As per Artha Kranti, if you have to ban a particular value, you have to print the exact replacement in the next smaller value denomination. The transition should be smooth, without giving trouble to anyone."

Bokil explained his idea of an ideal transition: First, abolish the existing taxation system, except for customs or import duties, completely.

All the transactions above Rs 2,000 should be routed through the banking channel that would attract a bank transaction tax (BTT), say of two per cent, deducted at source.

The central government, state governments and the local bodies get a share of this tax, which the banks transfer after deducting their fee.

Cash transactions, meanwhile, would not attract any tax.

Second, withdraw high value currencies in phases so that the highest denomination available is Rs 50.

In the final phase, all cash transactions above Rs 2,000 or so should be restricted. Above this limit, there would be no legal protection.

Bokil further explains the math behind his idea: As per the 2015-2016 Budgetary Estimates, the combined tax revenue of the central and all the state governments was about Rs 20 lakh crore, plus Rs 1 lakh crore more for the local bodies like municipal corporations.

However, as per the Reserve Bank of India estimates, the average monthly bank transaction volume is Rs 120 lakh crore.

Therefore, the same level of tax revenue can be generated through putting a BTT of only 1 per cent.

If it was so simple, why didn't others think about it?

Bokil has an equally simple explanation: "Our society has become so complex that it cannot take simple thoughts anymore. We are happy going against gravity, but not falling towards gravity. You don't need a big key to open a big lock."

While Bokil's math sounds simple, it leaves out critical factors.

For example, a large chunk of the RBI number could be because of the interbank currency market transactions.

The interbank transactions are done at such a wafer thin margin that tax is levied on the profit and not the volume.

And then there is also the question of the same value getting taxed again and again down the value chain.

Bokil insisted that the tax would be paid by the receiver only when the money is credited in his account and therefore the question of multiple taxation is irrelevant.

There could be valid criticism against the scheme, but the Artha Kranti team is happy that Prime Minister Modi met them several times and each meeting far exceeded the time allotted.

In September 2013, Modi gave the Artha Kranti team a 9 minute window, but the meeting went on over 90 minutes.

Modi met Bokil and his team two more times, and for hours.

Interestingly, Modi is not the only one who showed interest in their ideas. Pratibha Patil, when she was governor of Rajasthan, wrote in March 2007 to then Speaker of the Lok Sabha Somnath Chatterjee to give Bokil an opportunity to present his line of economic thoughts before the Members of Parliament.

Nitin Gadkari, as Leader of Opposition in the Maharashtra Legislative Council, wrote in October 2002 to Sudheendra Kulkarni, advisor to Prime Minister Atal Bihari Vajpayee, to give 'serious attention' to Bokil's transaction tax concept.

Andhra Pradesh's Chandrababu Naidu even incorporated some of Artha Kranti's suggestions in his election manifesto, Bokil claimed. He met Rahul Gandhi in 2012. Gandhi suggested he meet his expert team of advisors at the Rajiv Gandhi Foundation. The foundation members received Bokil's suggestions well and updated Gandhi.

However, not all were in a mood to pay attention to Bokil's tax reforms. Delhi Chief Minister Arvind Kejriwal, who was joint commissioner of Income Tax in New Delhi before joining politics, met Bokil and his team sometime in 2015.

Bokil claims he is neither linked to any ideology nor does he have any penchant for politics.

Artha Kranti is run by volunteers who pool their own money. But the group received Rs 25 lakh (Rs 2.5 million) as bank loan, against the guarantee of a Congress MLA, to publish their magazine Arthapurna.

The loan has been repaid since then by the volunteers. Bokil leads a spartan life. "I really can't think beyond Artha Kranti. We have to implement it in the country, and then if time permits, in the entire world."

But he reckons that it would be a long shot.

After Modi's announcement, Bokil is getting interview calls from the BBC, Al Jazeera and other global media organisations, not to mention from every media house in India.

He recently received an invitation from Warwick University to present a talk on his economic philosophy. "I eventually may not go there. Rather, I would use this momentum to take the movement to the grass root level," Bokil said.

But does he really need to spread the word more? He smiled and said, "My job is done. Maza aa gaya (it's fun)."

IMAGE: Women queue outside a bank to exchange their money in Allahabad. Photograph: PTI Photo 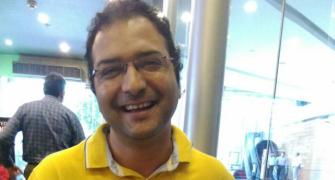 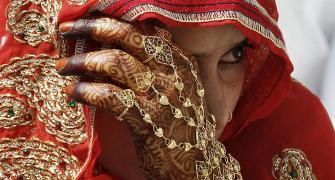 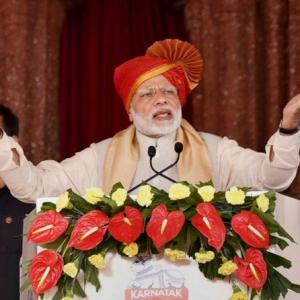 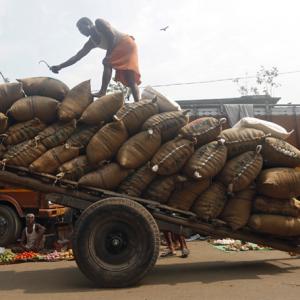