News
Business
Movies
Sports
Cricket
Get Ahead
Money Tips
Shopping
Sign in  |  Create a Rediffmail account
Rediff.com  » Business » For banks, the option is to go digital or die

Bankers need to take a call on whether they will allow technology firms to run banks or banks themselves will turn into tech firms, says Tamal Bandyopadhyay. 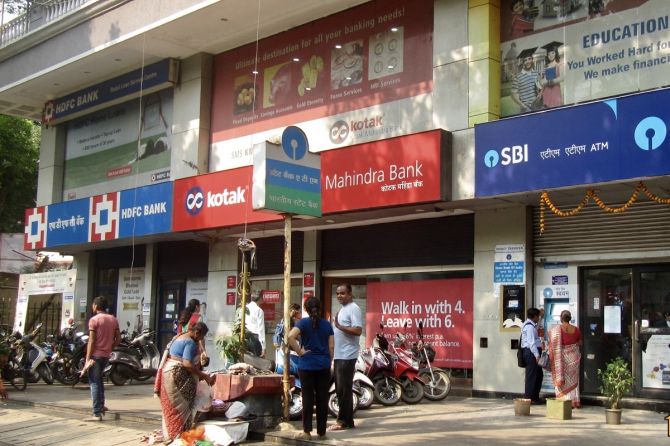 IMAGE: Kindly note that this image has only been posted for representational purposes. Photograph: Mahipal Soni/ Rediff.com

As we move ahead in 2021, let's look back at how banking evolved in India in the first two decades of this century. And what to expect next.

Incidentally, the Reserve Bank of India followed the wholesale price-based index inflation for its rate actions in the first decade; the focus shifted to consumer price index, or retail inflation, in January 2012. For calculations, I am following the calendar year. The last quarter GDP has not been factored in since it is not out as yet.

In December 2000, the banking system's deposit portfolio was about Rs 9.33 trillion. At least six banks, led by the State Bank of India, have bigger deposit kitties now. By December 2010, the industry's deposit pile swelled over five times to close to Rs 48 trillion.

By the end of the last decade, it had risen to Rs 144.8 trillion but the growth rate had dropped.

The compounded annual growth rate of bank deposits in the first decade of the century was 17.8 per cent; this dropped to 11.7 per cent in the last decade. The drop in bank credit during this period is much sharper -- from 22 per cent to 11.2 per cent.

Why did this happen? Because of the rise and rise in non-performing assets (NPAs). When the bad loans increase, banks need to set aside money for it and this erodes their capital. Unless they have sufficient capital, they cannot lend.

Eleven banks were restrained by the RBI in the past decade from giving fresh loans because of high bad loans and insufficient capital. High NPAs also inhibit bankers from being liberal in giving credit.

How did the RBI's policy rate and market rates move? And, what about the level of cash reserve ratio or CRR -- the portion of deposits that commercial banks need to keep with the RBI on which they do not earn any interest?

After the collapse of Lehman Brothers Holdings Inc, the CRR started moving southwards again. Currently, it is pegged at 3 per cent, its lowest.

In a liquidity-flush situation, which is the current scenario, the reverse repo (the rate at which banks park their excess cash with the RBI) becomes the de facto policy rate. By that logic, the policy rate in India is 3.35 per cent now.

The market rates, at the shorter end, have been more volatile in the second decade than the first. The yield on the 91-day treasury bill fluctuated between 3.15 per cent (September 2009) and 9.36 per cent (July 2008) in the first decade.

How did the banking infrastructure evolve in the first two decades?

Between March 2011 and March 2020, the ATM network went up from 99,523 to 108,818. (I couldn't get the ATM figures for the beginning of the century.) Of course, the branch and ATM network is of no great significance any more as the business correspondent model is firmly in place.

Like the first decade, the second too saw the birth of two new universal banks. Besides, two new sets of banks have appeared on the banking turf -- small finance banks and payments banks.

We continue to have a repressive financial system but the coverage has expanded substantially, thanks to the Pradhan Mantri Jan Dhan Yojana scheme -- the world's most ambitious financial inclusion drive, launched in August 2014.

Till mid-December 2020, close to 412 million accounts had been opened under this scheme and 306 million debit cards had been issued.

So, what's in store in the new decade?

When the debate is on whether the bankers have turned prudent or risk-averse, none can deny the fact that credit growth has become a casualty. It must pick up to support economic growth.

How can that happen?

The government, the majority owner of the public sector banks which have two-thirds share in the industry, has the answer. There's no debate that NPAs will rise.

Finally, the bankers need to take a call on whether they will allow technology firms to run banks or banks themselves will turn into tech firms.

For the banking industry, the option in the new decade is between going digital or dying, with the consumers spoilt for choice.