The real reason why stock markets are crashing

In a way it captures the irony of our times. Isn't it a bit strange that Saudi Arabia, the perceived beneficiary of the relentless oil price hike, should host a summit expressing 'concern' on the rising oil prices?

This high-profile summit was held in Jeddah, Saudi Arabia, last week after crude prices more than doubled over the past twelve months, stoking inflation and hurting economies across continents, ostensibly to diagnose the problem and possibly prescribe solutions.

This meeting was a congregation of oil producing and consuming countries to discuss the biggest challenge to the world economy since the World War II. Much less provide solutions to the issue of global inflation, the summit exposed serious fault lines that exist between major players even on the fundamental issue of arriving at a consensus on what causes the problem in the first place.

"Given the vital importance of petroleum to modern life, the global nature of the oil markets and the far ranging social, political and economic impacts of high prices and market volatility, we all have a stake in this conversation," Ali bin Ibrahim Al-Naimi, the Saudi petroleum minister, said. "The current market conditions are in the interest of neither the producers nor the consumers, and none of us can be content with the status quo," he added.

Reiterating the arguments put forth by the Saudi minister, a summit working paper reportedly called for action to "improve transparency and regulation of financial markets through measures to capture more data on index fund activity and to examine cross exchange inter-actions in the crude market."

In fact this is the predominant view of most consumer countries, including India.

But in direct contrast to the concerns expressed by many players in the oil market, US Energy Secretary Samuel Bodman concluded -- even before the summit -- that ". . . there is no evidence that we can find that speculators are driving futures prices. It is clear that the financial markets have seen unprecedented movement of capital into commodities in recent years. Our view is that this capital is following the market upward, it is not leading that movement."

Importantly, Bodman went on to add: "Fundamentally tight market conditions in our view are the major driver of the dramatic price increases that we have seen over the last five years, and particularly in recent months."

Crucial questions follow: if the current price is neither in the interest of the producers or consumers -- as the Saudi minister observed -- then, who is the end beneficiary of this relentless price rise? And even if we forget oil for a moment, is it not a fact that there has been a relentless price hike in virtually every commodity that is traded globally?

So is there a demand-supply mismatch in all commodities across continents, as Bodman observed in the case of oil? Are China and India, with their robust growth, creating relentless pressure on the global commodities markets and thereby causing runaway inflation? Or is there something more to it than meets the eye?

The impact of the Index Speculators

These questions were brilliantly, factually and logically answered by Michael Masters, managing member of Masters Capital Management, in a testimony before the United States Senate Committee recently.

Emphatically stating that institutional investors (comprising corporate and government pension funds, sovereign wealth funds, university endowments and other institutional investors) -- whom he terms 'Index Speculators' -- are contributing significantly to food and energy price inflation, Masters analyses the extant global inflation phenomenon in far greater detail and from a macro-economic perspective, perhaps unmatched by anyone else on this subject in recent times.

What is interesting in Masters' testimony is that he zeroes in on the crux of the issue straight away. Pointing out to the fact that never before have "investment majors had considered seriously investing in commodities futures markets as viable," Masters points out to the recent yet tectonic shift in the investment strategies of these players.

Correlating to the increase in the investment allocation to commodities index from $13 billion in 2003 to about $260 billion in March 2008, Masters points out to the resultant price increase of 25 commodities by an average of 183 per cent in this period.

Further, rubbishing the view that relentless consumption in China was the cause for the demand-supply mismatch that had led to the price increase, Masters points out that annual increase in Chinese demand of 920 million barrels for petroleum since 2003 till date has more or less matched by the demand by Index Speculators in the same period -- a fact that is virtually un-debated by analysts.

Naturally, Masters opens up a new paradigm in attempting to link the accumulation of commodities by these Index Speculators and the relentless price increase in such commodities globally.

The following Table gives out the commodity purchases by Index Speculators during the past five years: 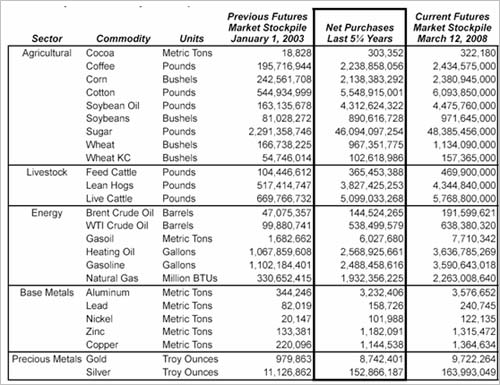 Masters does not stop there. Taking exception to the standard reply of economists on diversion of corn to ethanol production to be the reason for the rise in the prices of corn, he points out that institutional investors have stockpiled enough to potentially fuel the entire United States' ethanol industry at full capacity for an entire year!

Turning to wheat, he points out that the current wheat stockpile of Index Speculators is enough to supply every American citizen with all the bread, pasta and baked goods they can eat for the next two years!

Most economists believe that price and demand are inversely related. But in real world, it need not be so. That is because economists do not take into account the impact of collective psychology, which is difficult to predict. For instance, when prices rise, more people are tempted to buy more shares of that particular company in anticipation of greater price increases.

Economists rationalise the same as 'healthy speculation' which is 'vital' for the orderly functioning of the markets. When the prices of stocks move up rapidly it is termed as a 'boom.'

Strangely, when the same principles are applied to commodities it is termed as inflation! As the cliche goes, why not rename inflation as steel boom or oil boom, especially when similar financial instruments and rules are at play?

Naturally, in the absence of a clear understanding of the impact of collective psychology, classical solutions don't work with new investors who are insensitive to prices and continue to buy even when the prices increase.

The following table captures the resultant increase in the prices of commodity futures prices increases between 2003 and 2008. In effect, this is the new paradigm. Classical economists, trained in traditional methods to fight inflation, are no wonder finding their measures ineffective and are flummoxed by the turn of events. This explains the accelerating rate at which commodity prices are increasing globally.

That explains why the Saudi King is worried as his country is no longer the beneficiary of oil price rise. Neither are consuming countries. Economists, oblivious of this paradigm shift, blame everyone from China to India for this conundrum.

In the process they strain every sinew to explain the demand-supply mismatch when none exists, forgetting that it is the Index Speculators who are responsible for this price rise.

Economics is often held to be a trans-national discipline implying what is good economics for Americans must be good for Saudis. But times have changed. No wonder, this speculation by the new breed of Index Speculators is held to be toxic in Jeddah.

How, this is nectar in New York, London and perhaps in some other financial centres too.

The author is a Chennai-based chartered accountant. He can be contacted at mrv1000@rediffmail.com