News
Business
Movies
Sports
Cricket
Get Ahead
Money Tips
Shopping
Sign in  |  Create a Rediffmail account
Rediff.com  » Business » Mr Jaitley, when will you fix the economy?

'The quick fixes have failed; there is now no alternative to deeper reforms,' says Ajay Shah.
Illustration: Uttam Ghosh/Rediff.com 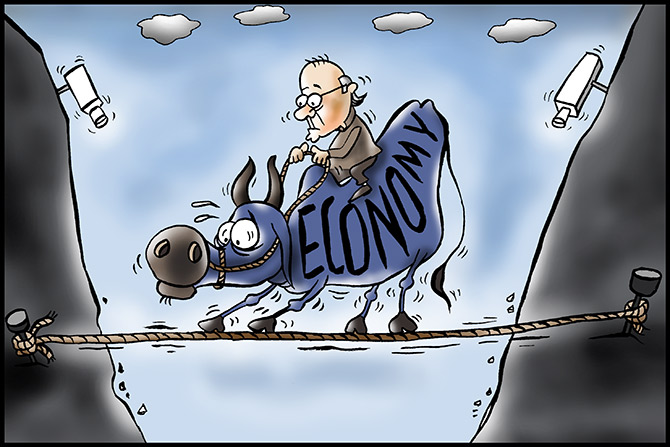 The dust is now settling from demonetisation and the Budget.

It is time for a fresh sense of the points of pain in the economy. The defining issue is stagnant investment.

Malfunctioning government, balance sheet difficulties and problems with profitability are holding back firms.

The banks have balance sheet stress.

The behaviour of enforcement agencies may snarl up the private sector.

The quick fixes have failed; there is now no alternative to deeper reforms.

From early November, our minds were occupied by demonetisation and then the Budget. We can now take two steps back and look at the landscape.

The defining problem of the economy is the lack of investment.

The best measure of investment activity is the stock of 'projects under implementation' as measured by the CMIE Capex database.

Investment has declined in this period, if we adjust for inflation, or if we express this as a ratio to GDP.

Some think that public investment can make a material difference to the problem of investment.

The trouble is the central government is too small to matter.

Even if this were pushed up to the hilt, it does not yield big numbers when compared with either the stock of projects under implementation (Rs 100 lakh crore) or GDP (Rs 151 lakh crore).

Textbook notions of macro policy, in this respect, do not work in India.

Some think the problem lay in bureaucratic paralysis of the UPA government. It was thought that if this problem was solved, investment would get back to the glory days of 2002 to 2008.

An 'action-oriented government' was tried, and this has not resuscitated investment.

We need to get a sound diagnosis of how the investment boom ran into trouble, so that we can address the problems.

The first issue concerns infrastructure projects, where roughly half of the overall investment is found.

The interfaces between government and the private sector continue to malfunction.

The scale of investment all across the country (roughly Rs 50 lakh crore of projects under implementation, as seen by the CMIE Capex database) is too vast to permit case-by-case interventions.

The second issue concerns financial stress in the non-financial firms, particularly in infrastructure.

Profitability and debt are at dangerous levels in roughly half of the Indian corporate balance sheet.

When the existing business yields a weak return on equity, firms are unlikely to add fresh capacity.

The firms who are struggling are in a mood to reduce leverage, rather than initiate new investment projects.

Roughly 80 per cent of the Indian banking system may be under stress, if we were to value assets at market value.

These banks are in a mood to focus on NPA recoveries and reduce leverage, rather than initiate new investment projects.

Recent developments about Kingfisher’s bank loans have sent out a wave of fear in banks and their borrowers.

Hawkish actions, and changes in laws, are creating concerns about the behaviour of tax authorities.

There is a possibility of the combination of the three Cs and the tax authorities creating an inspector raj.

This will hamper investment by private persons and lending by banks.

Business failure is an essential part of the market economy.

When a limited liability company fails to repay on its debts, the bankruptcy process kicks in, and the creditors gain control of the company.

A properly implemented Insolvency and Bankruptcy Code enshrines these principles.

All too often, however, we are veering to the notion that shareholders have unlimited liability, and that all credit default is grounded in malfeasance. This is not the case.

When a promoter steals from the company, s/he is stealing from minority shareholders and creditors. This is theft and should elicit enforcement actions -- regardless of whether there is a default or not.

The fact that default took place is neither a necessary condition nor a sufficient condition for this crime.

We in India are failing to draw these lines correctly. We then run the risk of creating a chilling environment for entrepreneurship and risk taking.

By this reasoning, investment has stagnated because of the government interface in infrastructure, financial stress in banks and corporations, and the incipient inspector raj.

What is to be done? Complex policy work is required in four areas, that will construct state capacity.

The Insolvency and Bankruptcy Code is well begun. However, the present text of the law, and the institutional machinery that enforces the law, will not deliver results.

In particular, there are large failures in the working of NCLT and DRT. A sound team needs to be put into place to make this work within a few years.

State capacity in the field of infrastructure needs to be constructed.

In energy and in transportation, there are three groups of problems: Planning, contracting and regulating. All six components are currently faulty.

Banking regulation has failed, which calls for RBI reforms. This requires enacting the draft Indian Financial Code, followed by a ‘task forces’ process to build capabilities at RBI.

Finally, we require laws and state capacity creation for the three Cs and for tax administration, to get to a sound enforcement environment with rule of law. Without this, we will collapse into fear and corruption.

DON'T MISS the FASCINATING INSIGHTS in the RELATED LINKS below.