Policy discussions now should urgently focus on the road map for serious economic and institutional reforms to put India on a sustained high growth trajectory like the Chinese economy, says Jayanta Roy.

The recent dip in gross domestic product (GDP) growth is being taken seriously in all quarters.

The myth of a high-growth trajectory is being challenged. Policymakers, however, are attributing this fall to demonetisation and the Goods and Services Tax (GST), and reluctantly, a few to decline of exports.

They predict that the growth will pick up next quarter to over 7 per cent without any basis, since mathematical modelling and forecasting tools have long been abandoned by the government.

Also, over 8 per cent growth has only been achieved during the short 2003-2007 period, when the world economy was buoyant, and the lagged effects of reforms under former prime ministers, P V Narasimha Rao and Atal Bihari Vajpayee, were felt.

The total absence of economic reforms, especially trade reforms, during the United Progressive Alliance regime, and continuing under the National Democratic Alliance could put us in the range of 5 to 6 per cent growth rate for years to come.

There are no quick fixes to achieving high growth since the problems are structural in nature.

The forthcoming Budget will hopefully unblock some longstanding reforms, and tinker with fiscal consolidation, but it is unlikely to revive the economy at least in the short-run.

Nor will the reduction in interest rates alone, a difficult proposition with continuing high inflation, help revive industrial growth.

The slowdown in the Indian economy is caused by structural factors related to the very high transaction costs that substantially impact all economic activity in the country, and which have not been adequately addressed in the past decade.

High transaction costs include the high costs of doing business in India, as well trading across borders.

In some sense, these costs are associated with the overall challenges of governance and efficacy of implementation. India continues to perform poorly in global indicators of business environment and governance.

India is ranked near the bottom relative to other major emerging countries in terms of indicators of trading across borders and starting a business.

The country also fares poorly in terms of quality of its bureaucracy which is a good indicator of the efficacy of overall governance. Such a poor institutional and business environment will not encourage entrepreneurship, local or through foreign direct investment.

The huge market opportunity due to India’s large and growing middle-class ensures that investment continues to take place despite such constraints, but this can hardly be a recipe for sustained growth and ensuring economic success in an increasingly competitive global economy.

Despite the author’s continued efforts to introduce trade facilitation reforms, the problems of trading across borders continue to daunt India.

The problems and their solutions were emphasised in the 2004 Report of the Working Group on Trade Facilitation under the author’s chairmanship.

Some of its key recommendations were soon implemented. But these were not systematically followed up.

Hence the approval process is still time consuming and cargo dwell time is in weeks as against hours in successful emerging countries.

Nor have we succeeded in having a fully automated clearance process with minimal face to face contacts, and thus encouraging corruption.

The problems related to dealing with several layers of bureaucracy and procedures for trading across borders, getting several types of approvals and licenses for starting and running a business, paying taxes, and getting access to critical infrastructure like energy and water need to be addressed on an urgent basis.

But it is quite clear that solutions to such problems will have a significant gestation lag.

The solutions will require serious engagement with micro level issues and will need policymakers to continuously monitor the interface between regulators and businesses and entrepreneurs on the ground.

Our PM has instructed his officials to improve India’s ranking in Ease of Doing Business (EODB) to 50 from 130, but so far no significant progress has been made.

A part of the reason is that without monitoring of the ground-level implementation of such legislations to ensure that they are business friendly, the transaction costs of doing business in India will continue to remain high.

There needs to be a mechanism for monitoring such micro-level issues related to business environment at the highest level of government and a comprehensive move to improve governance through the use of technology and through integrating private sector stakeholders in the oversight process related to the implementation of regulation.

These massive transaction costs are preventing the flow of private investment, and creating obstacles to regaining the lost export momentum.

Hence the government must give top priority to improving the business environment with trade and logistical facilitation reforms, and other reforms for EODB.

This will need a concerted effort by the central and state governments, and the private sector, but it has to be driven by the Centre.

Perhaps this could be the main task of NITI Aayog since the PM has to be directly supervising its timely implementation.

High growth is a necessity for achieving inclusive growth and having the status as an Upper Middle Income country where we should rightfully belong.

India will need at a minimum 10 per cent growth to catch up with Malaysia and Thailand by 2025.

India’s current per capita income ($1,582) is less than half of Indonesia, less than a third of Thailand, and less than a sixth of Malaysia.

India is also far behind these countries in most social indicators. We definitely need to shoot for a 10 per cent growth target.

Policy discussions now should urgently focus on the road map for serious economic and institutional reforms to put India on a sustained high growth trajectory like the Chinese economy.

The time is ripe to focus on the structural issues, and not just on the short term movement of some indicators.

Jayanta Roy was economic advisor in the Union commerce ministry. 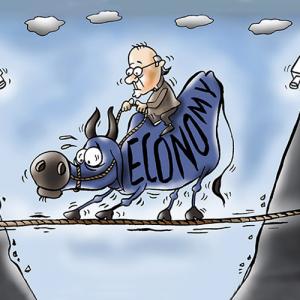