News
Business
Movies
Sports
Cricket
Get Ahead
Money Tips
Shopping
Sign in  |  Create a Rediffmail account
Rediff.com  » Business » How India can emerge from the economic slump

A way out of the economic slump is to revisit the template of 15 years ago and follow its constituents, recommends Ajay Shah.
Illustration: Uttam Ghosh/Rediff.com 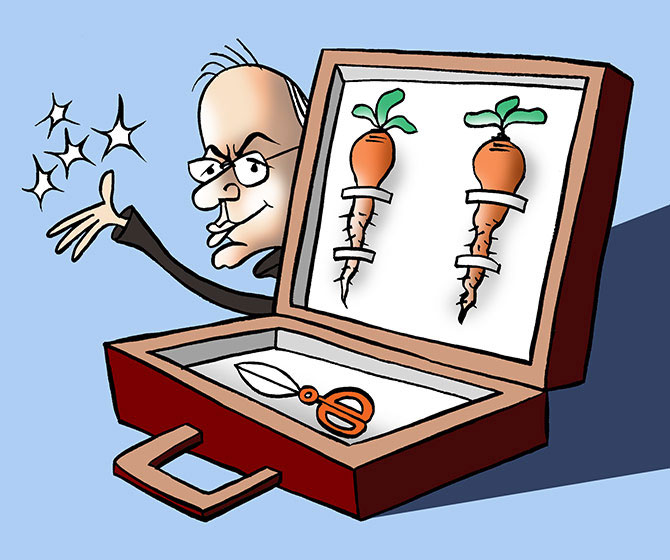 We have been in a sustained downturn from 2011 onwards. How will this end?

It is instructive to look at the last difficult downturn, of the late 1990s. We roared out of it through the exit of firms, improved productivity of firms, respect for policymakers, and a global revival.

This gives us a rough template of what it will take to get out of this slump.

This time, we will fare better on the exit of firms, through privatisation, the bankruptcy reform, and the resolution corporation.

We had a credit boom in the mid-1990s. Banking regulation was faulty so the banks gave bad loans, and we got a banking crisis.

The Asian Crisis started in August 1997. The RBI raised rates by 200 basis points in January 1998, in order to defend the rupee, which harmed the domestic economy.

There was an IT bust and then there were the 9/11 attacks. These problems ran from 1997 to 2002, after which India roared back remarkably well.

This was average annual growth of 20 per cent in real terms.

History does not repeat itself, but it sometimes rhymes.

We had a credit boom in 2004-2008. Banking regulation was faulty so the banks gave out bad loans, and we got a banking crisis.

The RBI raised rates by 400 bps in 2013 in order to defend the rupee, which harmed the domestic economy. We are now in a rough spot.

Sales of listed non-finance non-oil companies have negative growth, in real terms, from 2011 to 2017.

The outlook for external demand is clouded by geopolitical risk through the rise of nationalism worldwide.

How did the dramatic turnaround of the economy occur last time?

The first element of the story was the exit of firms.

Thousands of firms went out of business.

In those days, 'going out of business' was not a clear bankruptcy filing. Thousands of firms either shrank to an irrelevant size, or ceased operations.

This helped reduce competition for the survivors.

The survivors sharply increased productivity. It was clear to the survivors that there was no easy option, that customs tariffs and the barriers to FDI were going to end.

They focused on increasing productivity. A variety of metrics shows the transformation of Indian firms in that period, with improved processes and improvements in management.

Policymakers had their back against the wall. There was candour about the difficulties of the economy, and this pressure was channelled into economic reforms.

Teams were assembled and executed complex change in numerous areas, including:

These teams went after deeper reforms and not superficial patches.

As an example, the UTI crisis was followed by a 50/50 sharing of the burden between UTI customers and the taxpayer, the old UTI Act was repealed, and the viable part of UTI was privatised.

This permanently solved the UTI problem.

Similarly, in the equity market reform, the old 'badla' trading of the Bombay Stock Exchange and the Calcutta Stock Exchange was ended, and derivatives trading began.

This permanently put the Indian equity market on a sound footing.

Similarly, in the telecom reform, control of Indian telecom was wrested away from the Department of Telecommunications/MTNL/BSNL, with the entry of private and foreign telecom companies.

This gave revolutionary and permanent gains.

The private sector (in India and abroad) started looking at Indian policymakers with new respect.

A team that can figure how to build highways will possibly, in the future, learn to build airports and railways too.

A team that can figure how to build an equity market will possibly, in the future, learn how to build the bond-currency-derivatives nexus too.

The world economy turned around after the 9/11 attacks, and experienced a good expansion till 2007.

The stronger Indian firms were able to tap into external demand in this period, which helped demand conditions and optimism domestically.

Optimism is measured by the stock of 'announced' projects, by the private sector, in the CMIE Capex data.

In summary, India roared back from 2002 onwards because of four things: Exit of firms, productivity gains by survivors, respect for the policy establishment, and a global recovery.

This gives us a rough template to think about how we can come out of the present slump.

One element where things could work well is the exit of firms.

The Insolvency and Bankruptcy Code is a half-done reform that could help significantly increase the pace of firm exit.

The privatisation process can yield important gains in this regard.

'Zombie firms' are those that ought not to exist, but are kept alive on artificial life support by the government or by banks.

They are selling goods and services at artificially low prices, which harms the profit rates of the healthy firms in their industry. The presence of zombie firms harms healthy firms.

When the government pulls the plug on Air India, or when the banks pull the plug on companies that have been kept alive by additional bank credit, or zombie banks exit the banking industry, this helps increase prices and profitability of survivors.

These gains can be obtained by pushing on four fronts: Privatisation, the IBC, Resolution Corporation, and reforms of banking regulation. 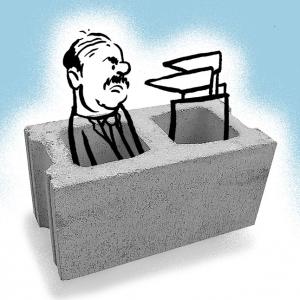