News
Business
Movies
Sports
Cricket
Get Ahead
Money Tips
Shopping
Sign in  |  Create a Rediffmail account
Rediff.com  » Business » How CM Modi showed us what PM Modi would be like

The expectation that Mr Modi would be a major reformer, capable of reinvigorating the Indian economy, were based on a complete misreading of both his actions and his performance as Gujarat chief minister, says Mihir S Sharma. 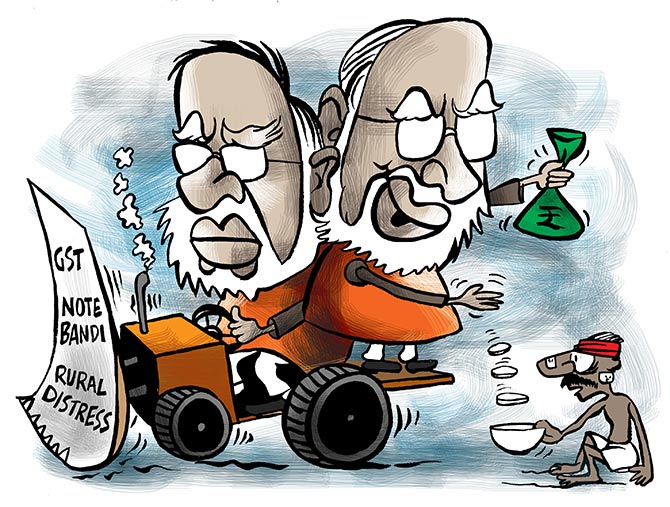 Normally, at this point in a Union government’s term -- as it approaches the people for another mandate -- it would be appropriate to judge it by the numbers

How has it done on growth, given its opportunities?

Where would it stand in terms of its various predecessors on this metric?

What has been its performance on the deficit, and on focusing on productive spending?

Unfortunately, this is not an option that is easily available in 2019.

And the reason is that the numbers that would have to be used for this are, unfortunately, no longer widely trusted.

Consider that, according to the GDP numbers -- seen together with the back series -- India has over the past few years, since demonetisation, equalled or beaten its past economic growth record.

This is not generally believed, since the notion that India is growing faster than it ever has is contradicted by most other indicators.

Indeed, anyone who lived through the boom of the 2000s will know this is untrue.

Recently, over 100 economists from institutions in India and abroad signed a letter complaining about “political interference” in Indian statistics, adding that “any statistics that cast an iota of doubt on the achievement of the government seem to get revised or suppressed on the basis of some questionable methodology”.

In some sense, the inability to make comparisons on the basis of state-released data with previous administrations is perhaps the ideal situation for the current government.

Few governments in our history were presented with the sort of open goal that the current one was; and there is little doubt that it has, through a combination of poor theory and incompetent management, managed to kick the ball wide.

Many analysts will say that Prime Minister Narendra Modi’s performance has been poorer than expected.

If anything, that is a consensus.

But, in fact, that conclusion is an error of judgement that simply doubles down on the mistakes made by such analysts prior to 2014.

The expectation that Mr Modi would be a major reformer, capable of reinvigorating the Indian economy, were based on a complete misreading of both his actions and his performance as Gujarat chief minister.

In 2013, in these columns, I looked at the performance of the “Gujarat model” and concluded that it was based on hype.

For example, between 2004 and 2012, growth in per capita consumption in the state had lagged the national average.

Under Mr Modi, growth had not increased in Gujarat in that period as much as in, say, the other rich states of Maharashtra or Tamil Nadu.

The state had actually gone down the list of Indian states in terms of most human development indicators (in an early indicator of his tendency towards gaffes, then chief minister Modi said that poor malnutrition results for his state were due to girls dieting).

Mr Modi’s record as chief minister was sold on hype without much substance; he was elected prime minister as a consequence, and if he is re-elected in similar manner then we should not be surprised.

Nor are Mr Modi’s actions as prime minister particularly surprising -- with the major exception of demonetisation, of course.

It is true that he has largely been statist in orientation, far from being the market-friendly reformist that many economists imagined in 2014.

But, in fact, this is exactly what should have been expected.

Mr Modi might have used the “minimum government” buzzword, but that was merely an early sign of his unmatched ability to use tokenism and slogans to appeal to multiple different groups of voters and influencers.

In 2013, I looked through the then chief minister Modi’s speeches and stated positions and found little of the reformer in them.

Here is a short recapitulation of that.

Most of us remember that CM Modi was the main obstacle for years to the passage of the Goods and Services Tax for which PM Modi now claims credit.

But there is more. CM Modi had, for example, argued that relaxation of foreign direct investment was meant only to benefit “Italian businessmen”, a political  -- or personal -- reference that is easy to categorise.

He said that labour laws should be for states to change, not the Centre.

He argued strongly against Manmohan Singh’s rationalisation of diesel prices, saying that it was dangerous, and would cause India’s “ship to sink”.

Limits on the number of subsidised gas cylinders imposed at the same time consisted of “cheating the people”, according to CM Modi.

And in case anyone is wondering what CM Modi’s preferred approach was, his website said: “On the same day the UPA announced these regressive decisions [i.e., the fiscally responsible decision to decontrol diesel and limit LPG subsidies] Shri Modi announced 100 per cent relief on loans and 50 per cent relief on electricity bills for farmers.”

At best, Mr Modi was a competent administrator of an already fast-growing state.

He depended on his state’s famously efficient bureaucracy and on personal relationships with big business that up his state’s numbers through targeted investment.

As some warned then, this is not a skill set that transfers easily over to the prime minister’s office, where reform of administrative procedures and creation of capacity is a far more important task than micro-management of individual projects.

We should not therefore view this government as a disappointment.

The prime minister’s track record and statements prior to being elected were a fairly accurate predictor of how in fact the government has performed.

It has largely depended on bureaucrats for policy innovation and implementation; it has avoided privatisation and indeed expanded the scope of the public sector by involving it in such things as supporting start-ups; it has built up liabilities, although much of that is off the balance sheet; it has centralised decision-making; it has reversed 25 years of external liberalisation by turning again to tariffs and industrial policy-style sectoral preferences.

As happened in Gujarat, consumption growth -- particularly rural consumption -- has been below par.

As India enters another general election campaign, there should at least be an acknowledgement of how different expectations will have to be for another term from Mr Modi, which is the likely outcome of the vote.

Economic transformation is off the table. It always was. 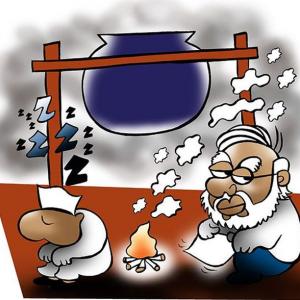