How many IAS officers does India actually need?

If the government could do without 23 per cent of the authorised posts, surely a start could be made in government downsizing by abolishing these vacancies, says  A K Bhattacharya. 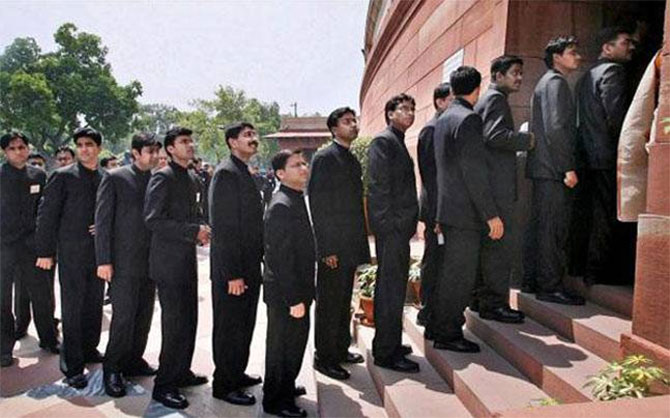 The gap between the authorised strength of officials belonging to the Indian Administrative Service (IAS) and the actual number of such officials functioning from different states and at the Centre last year was estimated at 1,470.

At 23 per cent of the authorised strength, the gap is quite significant, though no comparable data for previous years are available to indicate if the gap has been widening for some time. But this gap alone is sufficient to indicate the state of India’s famed steel frame.

Two questions arise from these numbers. One, why have the governments in states and at the Centre allowed this gap to continue without taking necessary steps to bridge it? Not too many people in the government system seem to be bothered.

Do requirements of administration and governance enjoy such a low priority that a manpower deficit of this order can be ignored?

The second question that the gap raises is even more disconcerting. If administration could go on in spite of a 23 per cent shortfall in the deployment of IAS officers, is there something wrong in the way estimates of the authorised strength of such officers have been made?

It is likely that the requirement of IAS officers in different jobs has been overestimated as part of the so-called planning for sudden shortages or emergency situations.

If that is the case then the immediate requirement is to undertake a countrywide assessment to arrive at a more realistic and reduced number of IAS officers needed in states and at the Centre.

If the government could do without 23 per cent of the authorised posts, surely a start could be made in government downsizing by abolishing these vacancies as the first step. The second step would be to re-calculate what the authorised strength of IAS posts should be in each of the states and at the Centre.

The third step should be to do away with the current system of reviewing the strength of IAS posts in states once in five years. Instead of a five-year review, any estimate of authorised IAS posts should be subject to the state or the Centre justifying the need for an enhancement in strength.

The stock response of the Union Ministry of Personnel, Public Grievances and Pensions to questions on the shortfall in IAS officers is that their annual intake is being raised.

But the problem of a 23 per cent gap between the authorised strength and actual deployment is not new and the government has been troubled by this gap for quite a few years. This problem, therefore, is not going to be solved through a supply-side response. Instead, there is need for a demand-side solution by reassessing the actual need for such posts.

There is another issue at stake here. The widest gap between the authorised strength and actual deployment of IAS officers is seen in Bihar at 37 per cent; the narrowest gap is in Rajasthan at 14 per cent.

Is it possible to establish a correlation between governance and the extent of shortfall in IAS officers’ deployment? An assessment that can indicate such correlation or the lack of it would be useful in arriving at what the ideal authorised strength of IAS officers ought to be in different states.

Interestingly, the shortfall in Chhattisgarh and Punjab is only 15 per cent and 16 per cent, respectively. States such as Madhya Pradesh, Odisha, Andhra Pradesh, UP, Arunachal Pradesh, Goa, Mizoram and Union territories have a shortfall range of 18-19 per cent.

In contrast, apparently better-administered states have a deficit that raises questions about the correlation between governance and the shortfall rate - Maharashtra, Haryana and Himachal Pradesh (22 per cent gap for each of them), Gujarat and Tamil Nadu (24 per cent each), Karnataka and West Bengal (28 per cent each) and Kerala (32 per cent).

It is possible to argue that some of these states are no longer as well-administered as they used to be and the gap only reflects deterioration in governance. But the extent of the gap in different states calls for a fresh review of the ideal authorised strength of IAS officers in the country, instead of the bland response that more IAS officers are being inducted to address the apparent shortage.