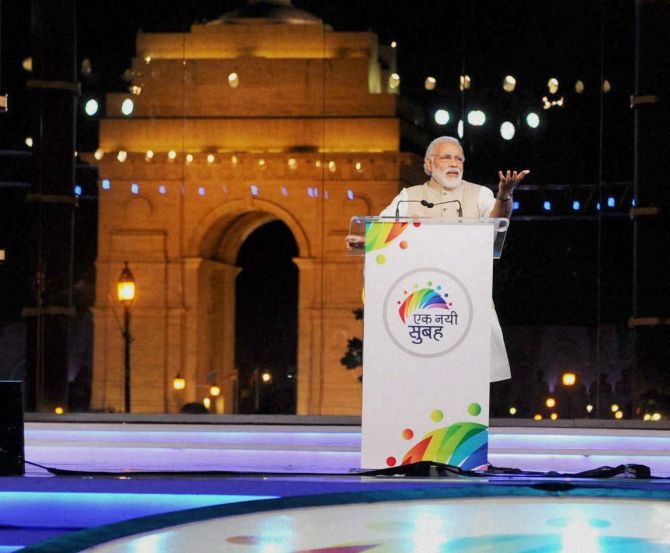 With the government claiming that the economy has been growing robustly and the Opposition refuting these claims, the common man is none the wiser, says Rajeev Sharma.

Hamlet's philosophical observations is so relevant in today's times of murky politics.

The Modi government insists that the economy is growing at the rate of 7.9 per cent. The Congress party says it is not showing in terms of jobs generated or the common man's income.

Former finance minister P Chidambaram told a press conference last week that there is a growing dichotomy between the GDP numbers and other economic indicators and if the GDP was calculated under the methodology of the old series, the growth estimate for 2015-2016 would be about 5 per cent.

Chidambaram twisted the knife with this jibe: 'The average citizens need jobs and incomes. They do not consume GDP numbers.'

Water Resources Minister Uma Bharti declared that the Ganga will be among the country's 10 cleanest rivers by 2018, part of an ambitious river cleaning project for which the Modi government has pledged Rs 20,000 crore (Rs 200 billion).

Since the Modi government took over in May 2014, the Supreme Court has made scathing remarks on the government's performance in this area at least twice. In September 2014, the apex court said the Centre's action plan may not help clean the Ganga 'even after 200 years.'

In January 2015, a three Supreme Court judges headed by Justice T S Thakur observed that the cleaning of the Ganga had been on for the last 30 years and around Rs 2,000 crore (Rs 20 billion) have been spent so far and remarked, 'Do you want to complete it this term or the next term?'

Only recently, the Supreme Court chastised the Modi government for its negligence in managing the consequences of two years of drought and passing the buck in providing drought relief.

'The government failed to anticipate and tackle the acute distress in rural India,' Chidambaram charged.

Yet another minister Nirmala Sitharaman felt, 'We are able to draw a lot more foreign investment. PM Modi's trips are helping a lot to do that.' Modi's pet 'Make in India' scheme was eulogised at the India Gate event.

The Congress says investor confidence in India is down and the forecast is gloomy. Chidambaram in this context: 'Make in India is, at the present stage, a non-starter. There is a study which shows that the bulk of the FDI inflows have come into the services sector and not into manufacturing.'

'893 projects were classified as stalled projects in March 2016,' the former finance mionister said. 'According to the Centre for Monitoring of Indian Economy, 1,137 projects slipped into the categories of stalled/shelved/abandoned in the last two years. There is no evidence of private investment in greenfield manufacturing industries.'

India's common man has been bombarded with claims and counterclaims on development as the Modi government entered its third year in office.

It is natural in a fiercely democratic country that the government makes tall claims about its achievements and the Opposition debunks these claims.

It is left to the man on the street to sift the truth from this maze of words.