Questions on the efficacy of the government’s drive towards filing of more returns by individuals and on whether raising tax exemption levels has led to reduced compliance in filing of returns by those who go out of the tax net, says A K Bhattacharya. 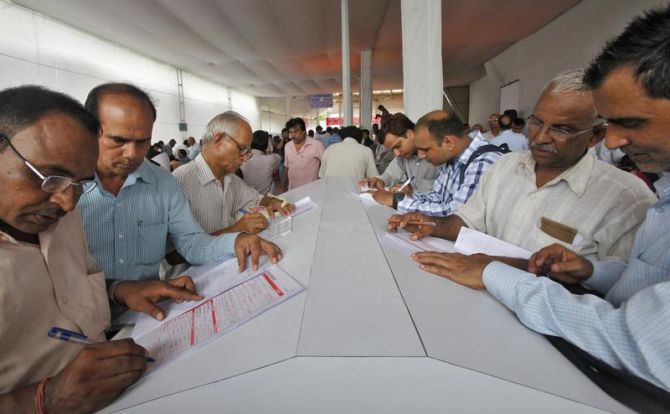 The Central Board of Direct Taxes may (CBDT) celebrate the arrival of “acche din” with the latest income-tax returns data showing a 23.5 per cent increase in the number of individuals reporting an annual gross total income of over Rs 1 crore to 59,830.

But it may also need to closely examine the rapid decline in the number of returns by individuals who are at the lower ranges of reported income.

This raises questions on the efficacy of the government’s drive towards filing of more returns by individuals and on whether raising tax exemption levels has led to reduced compliance in filing of returns by those who go out of the tax net.

In the following year, the last year of the Manmohan Singh government, that share declined to 37 per cent of the 36.51 million returns filed.

And during 2014-15, the first year of the Modi government, the share of such returns dropped to a low 20 per cent of the 40.73 million returns filed by individuals. The absolute numbers are even more startling.

The decline during this period is also noticeable in each of the four sub-categories of an annual gross total income of below Rs 250,000.

These numbers have been released by the CBDT through its latest report on income-tax return statistics for the 2015-16 assessment year.

An assessment year captures income earned in the previous year.

Gross total income is what taxpayers report to the income-tax authorities in their annual returns and this amount includes salary, income from house property, income from business/profession, capital gains, and income from other sources.

Tax experts point out that this sharp decline could be attributed to two factors. One, many individuals may be graduating to the higher-income ranges with every passing year.

Indeed, almost all income ranges above Rs 250,000 (barring a couple of high-income ranges) have seen a steady rise in the number of returns in these three years.

According to such analysis, the decline in the number of returns in the category below Rs 250,000 has been more than made good by the rise in the returns filed under higher-income categories.

In effect, this has improved the tax administration’s productivity with a rise in revenue collections per return.

These decisions implied that a large number of individuals, including senior citizens, were no longer required to file returns as they fell below the tax exemption level.

That could be one reason for the decline in the number of returns among those who had annual gross total incomes of less than Rs 250,000.

The challenge that the CBDT will have to grapple with in the coming days would be to prevent any further erosion in the tax returns base as and when the government further raises the exemption levels.

What needs to be done to encourage individuals to continue filing returns will have to be examined.

Tax experts admit that one of the pitfalls of raising tax exemption levels is the loss of the tax base and taxpayers’ data.

Growing middle: 2.95 mn Indians with income of over Rs 10 lakh

In sharp contrast to this decline in the number of returns from lower income-earning individuals is the rise in the category of those who have been earning over Rs 1 crore.

The increase stands out particularly because the number of individuals with an annual gross total income of over Rs 1 crore grew at a much lower rate of 10 per cent in 2013-14, the last year of the Manmohan Singh government.

For instance, how many individuals in this country are reporting an annual gross total income of over Rs 50 lakh?

The CBDT data reveal that in 2014-15 there were as many as 176,741 individuals who reported an annual gross total income of over Rs 50 lakh.

The number of individuals reporting an annual gross total income of over Rs 10 lakh was higher at 2.95 million in 2014-15.

Compare that with the steadily rising numbers of such individuals (2.44 million in 2013-14 and 2.02 million in 2012-13), you can get a sense of the forces of India’s growth in the consumption of cars, two-wheelers, and a host of white goods like refrigerators and air-conditioners.

Growth is a little higher at the lower end. The number of individuals with an annual gross total income of over Rs 5 lakh in 2014-15 rose almost 24 per cent at 11.08 million.

The CBDT numbers also have serious implications for the future treatment of capital gains from the taxation point of view.

A similar trend of companies accounting for the largest chunk prevailed in respect of short-term capital gains as well.

If the government does indeed consider removing the concessional tax treatment for long-term capital gains, companies will take a bigger hit.

And even among individuals, the burden will be borne largely by those earning an annual gross total income between Rs 1 crore and Rs 5 crore, who accounted for about one-fourth of such gains in 2014-15.

The CBDT data also show how individuals reported a much lower house property income of Rs 27,221 crore, a decline of 39 per cent over the previous year. 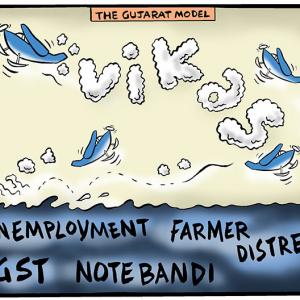