News
Business
Movies
Sports
Cricket
Get Ahead
Money Tips
Shopping
Sign in  |  Create a Rediffmail account
Rediff.com  » Business » Why is credit so relevant to India's economy?

Why is credit so relevant to India's economy?

In the first article in the series of understanding how the economic machinery works, we introduced transactions, credit, interest rates and inflation (the article can be read here). This part will deal with the importance of credit and introduces deleveraging. The third part will talk about the impact of deleveraging and introduces fiscal deficit. The concluding part, weaves all the different parts of the economic machinery together to help the readers take a view on the current economic scenario in India.

But why is credit important?

Credit allows the borrower to increase his spending today. Remember that the borrower is required to improve his productivity so that he can pay for his past expenses in the future. Credit is good because spending drives the economy. One persons spending is income for another.  It is the fuel to the engine. 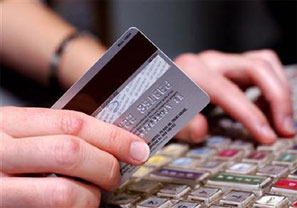 When someone’s income rises he can borrow more and spend more as his creditworthiness increases. Creditworthiness is made up of two things – his ability to repay and his real assets that he bought from his rising income. This process continues until the spending at the origin stops. This whole process is cyclical. Hence the short term credit cycles are formed.

Credit is relevant in the short run but what actually matters is productivity in the long run. That is the amount of goods and services our country produces. This is measured by GDP. The credit created just acts as the motivational force to improve our productivity.  It helps businessmen to compete in the market and produce more efficiently.

In fact, credit is an outcome of human behavior. We want to spend more that our neighbors. Sometimes greed and envy take over the thinking process, making people irrational.

In a country like ours, the culture can actually help us be better economists. Our wisdom of ages teaches us not to be overly greedy and not overly materialistic, as is evident from the high savings rate of our households. If we all were to work rationally then our country will automatically become more productive in the long run.

This does not always happen. An example is the US housing bubble when people borrowed more than they could produce. This bought the lenders to their knees.

This does not mean that credit is bad. It is bad only if you borrow to consume but do not increase your productivity. Credit does create inflation due to more money coming into the market and creating more demand for goods and services.

Now let us talk about credit cycles that are long term in nature and the most dangerous. The short term typically lasts for 5-8 years but the long term cycle lasts for 75-100 years.  This happens because people are more willing to borrow and spend than to pay back and assume that productivity will naturally increase. They think that things will forever be great and that credit will always be available.

Now imagine a weighing machine. On one hand we have income (productivity) and on the other hand we have debt. When debt is increasing and incomes rise with the same rate then we have little to worry. In such an environment assets value soar and inflation is observed (Inflation is a proxy of growth here). But this environment does not last forever.

When the debt repayment increases more than the income we must believe that recession is at hand.

But there can be a worse scenario.  In the developed world in the years 1929 and 2008, the rate of increase in debt had outpaced the rate of growth of income. This led to the peak of debt cycle and recession. The consequences are as expected. Incomes fall, people cut spending, asset prices drop, credit disappears, stock market falls, social tensions rise, people feel poor. This scenario is called – Deleveraging

A vicious cycle begins –This is different from recession because interest rates cannot be further reduced. 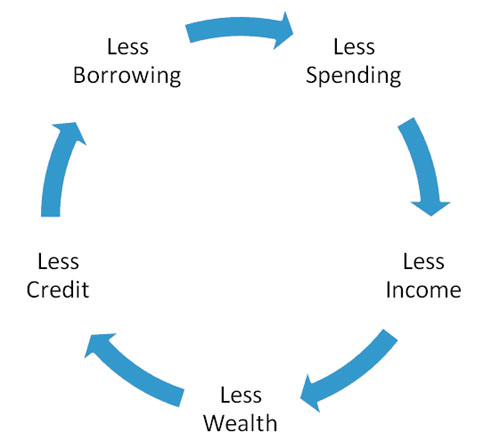 If the interest rates are already very low (even close to 0%), lenders stop lending, borrowers stop borrowing. The economy comes to a halt. This is something that has not happened in India since 1991, just before the financial reforms. We as a country have this opportunity to learn from others’ mistakes as well as our past and can actually be careful in creating CREDIT BUBBLES.

In 1991, the government of India was close to default. The central bank had refused to new credit with which the country runs and foreign exchange reserves had dried up. Remember this was a world where the government used to run all the businesses and there was little private participation. We had to airlift our gold reserves as a pledge with IMF.