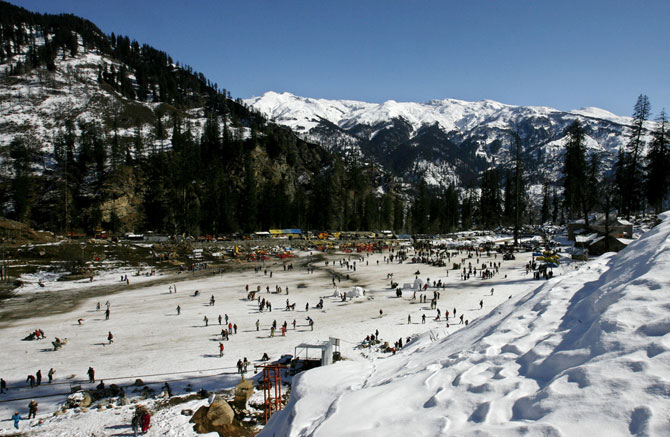 What better way to celebrate the onset of winters than to zip through fresh powder snow on the mighty slopes of the Himalayas? We list the best skiing destinations that the country has to offer.

Though you could always find a bunch of tourists skiing down the snowy slopes of Solang, the sport existed in an amateurish, unorganised form. It is only in the last couple of years that infrastructure has come up in the form of ski resorts, well-designed slopes and cable cars.

"The gondola has been imported from France and investment of Rs 40 crore has been put in to make Solang a skiing destination," says Amitabh Sharma, managing director, Ski Himalayas, which is developing the ropeway-cum-ski project jointly with Himachal Pradesh tourism department.

Thirty-five hectares of slopes are being groomed and designed for skiers. "You get very good recrystallised powder snow here, which is a favourite with ski enthusiasts," says Sharma.

Want to share your travel story and pictures? Simply write in to travelpicsga@rediffmail.com (subject line: 'My Travel Story'), along with pictures of the destination you're writing about. We'll publish the best ones right here on rediff.com! 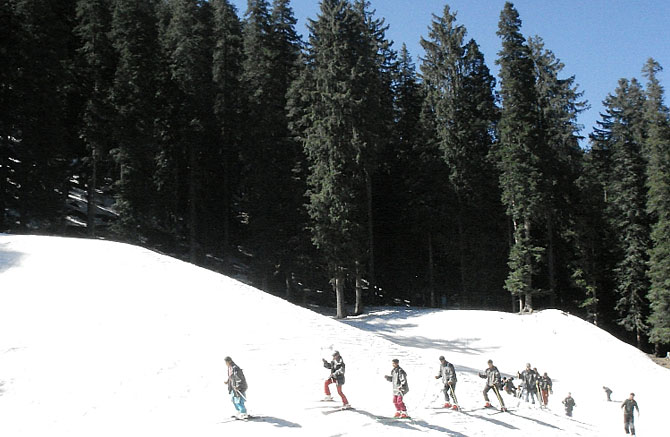 The ropeway takes tourists to the ridge of Mount Phatru, at an elevation of 10,000 feet that allows them to increase the ski run by at least three kilometres. As of now, the slopes are visited mostly by beginners and intermediate students, with the experts heading to the snowy heights of Gulmarg.

Cost: For a 15-day skiing trip, with stay in a budget hotel, Ski Himalayas offers a package of Rs 55,000. This includes cost of equipment, accommodation and training as well. However, the cost increases to Rs 95,000 if staying in a quality hotel. In this package, visitors get the benefit of a dedicated trainer as well.

Equipment for a skier 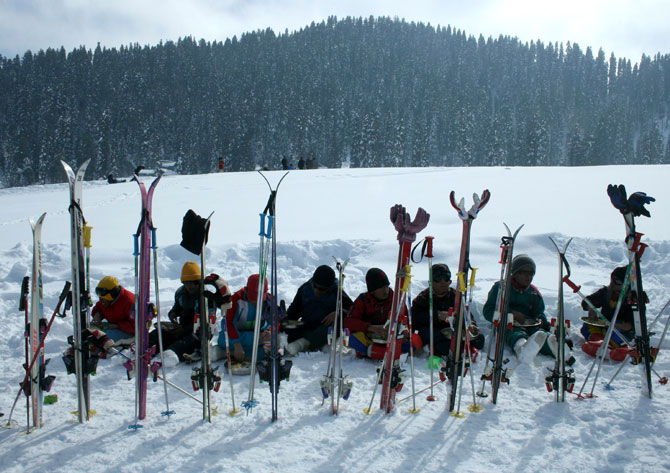 Crisp cold air, fine powder snow and versatile slopes -- ranging from beginner and intermediate to advanced -- make Gulmarg one of the finest skiing destinations in the country.

It is rated highly by adventure tourists, media and travel portals around the globe: for instance, Gulmarg was considered by CNN International as the seventh best ski destination in the world.

"Thousands of people come here every year. Till some time ago, we used to get mostly foreign adventure tourists from countries like France, Australia, New Zealand and Japan, but now domestic ski-enthusiasts are coming in large numbers as well. The awareness of the sport in the country is increasing," says AM Bhat of the Indian Institute of Skiing and Mountaineering, Gulmarg.

Good things come to those who wait. This saying is especially true when it comes to ascending the slopes on one of the world's highest gondolas that takes you up to 3,979 metres.

You will need to wait in a long queue, but you might end up exchanging adventure stories with like minded skiers from around the world. And the waft of the winter breeze on the face as you watch the valley below sparkling with snow jewels, looking like something out of a Christmas card, is worth it. 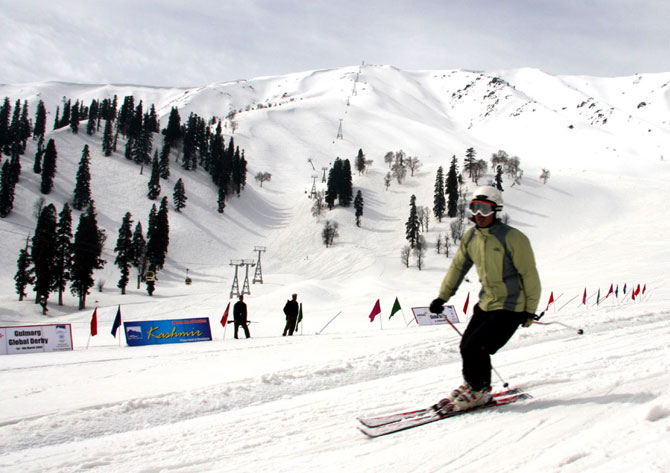 In the past because of tensions along the Indo-Pak border, United States of America had warned its citizens to be cautious when visiting Gulmarg.

"US ne pabandi lagayi thi (US had restricted the visits), but it seems likely that they will remove it now," says Bhat. "Tourists love to come here as it is one of the cheapest skiing destinations in the world."

Natural slopes that don't need much designing by experts make Gulmarg a much loved skiing destination. There are tough steep slopes for experts and the gentler ones for beginners.

Veteran skiers can zip through 1,000-metre vertical runs to get the adrenalin pumping. Some have even negotiated runs at 65 degree steeps.

"Nowhere else in the country will you find snow for such a long duration -- from December to mid-April. You will always find fresh powder snow here. One of our former directors, who was a foreigner, said in his parting speech that if he had the strength he would transport the slopes of Gulmarg to his homeland," says Bhat.

Cost: IISM offers a 14-day training course, including boarding and lodging, for Rs 5,000. If you wish to stay elsewhere (average hotel rooms in season cost Rs 5,000 per day), you can hire equipment from the institute for Rs 350 per day

Heli Skiing: Not for the faint-hearted 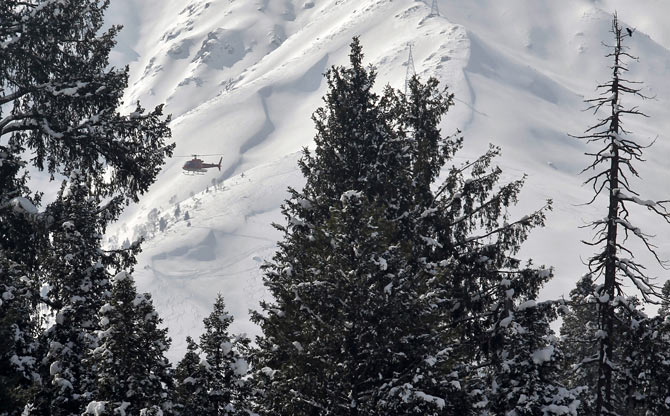 Heliskiing is not for the faint-hearted! The super-speciality adventure sport involves the skier being dropped onto a snow-laden peak from the helicopter. For now, this sport takes place only in Gulmarg because it offers the heights required for the drop.

"The helicopter usually drops you at a height of 18,000 feet. Heli skiing is mostly patronised by veterans as it requires tremendous expertise to manoeuvre the slopes after the drop," says Bhat. IISM started heli skiing in 2007. 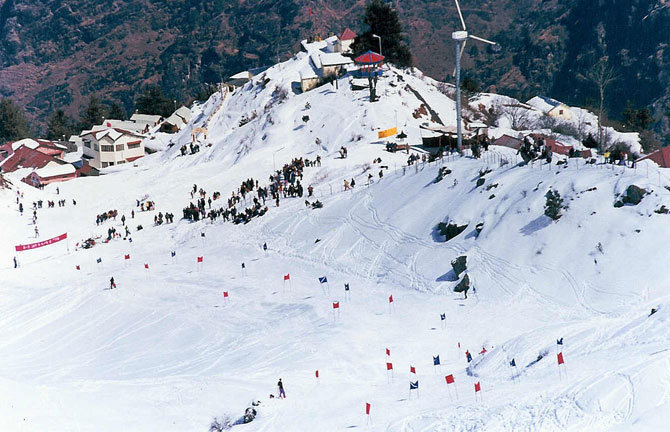 This Uttarakhand venue was always popular in the skiing circuit, but shot to international fame after it hosted the first South Asian Winter Games in 2011.

Auli, till then a pristine bugyal, emerged as a major skiing destination after the games. It is perhaps the only place to have an artificial gun to create powder snow for skiers.

"But in the last few years, there hasn't been much of an opportunity to use the snow gun as Auli has received great snowfall. This year too we are expecting a lot of snow," says Nalin Khanduri, an avid skier and founder of the Great Indian Outdoors Adventures.

Auli is a favourite with those competing in championships 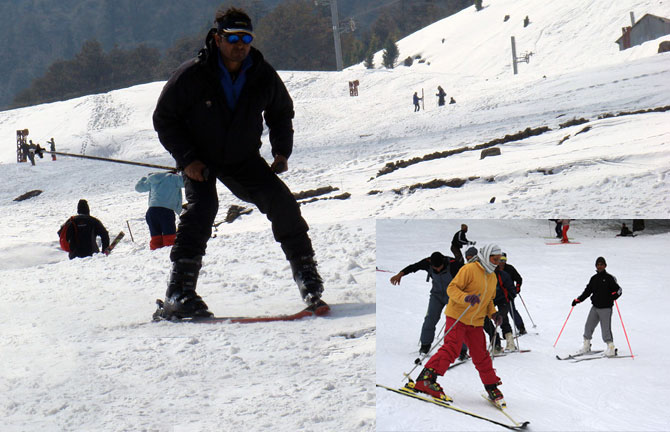 Auli is a great favourite with those competing in championships. "When the South Asian games were held here, the slopes were groomed and designed by experts from Europe. They carved out slopes for intermediary as well as expert levels," says Khanduri.

He recommends opting for training in small groups with a large number of dedicated trainers. Apart from Auli, he has witnessed an increase in skiing in Spiti as well.

"Locals ski there bigtime. But it is not organised and there is little infrastructure. There is no infrastructure in Kufri either; people just think it's a skiing destination because of the snow."

Cost: For a week-long trip, GIO Adventures offers a package of Rs 18,000-20,000. This is inclusive of accommodation, personal skiing instructions and training.

Season: End of December to March

Expert speak
Jamyang Namgial, 29, is a rare professional Indian skier. He participated in his first Olympic event at the 2010 Winter Olympics in Canada when he competed in the Men's Giant Slalom event of Alpine skiing.

"I was selected for the army skiing team during selection trials for the Ladakh Scouts, after which I was sent to High Altitude Warfare School to train. It was an amazing feeling to practise a sport that I had seen only on TV," he says.

He rates Auli and Gulmarg highly as skiing destinations.

"Gulmarg has natural slopes and natural snow which puts it at par with international destinations. Auli, being the venue of championships, has received the benefit of grooming."

Want to share your travel story and pictures? Simply write in to travelpicsga@rediffmail.com (subject line: 'My Travel Story'), along with pictures of the destination you're writing about. We'll publish the best ones right here on rediff.com!