Sign in  |  Create a Rediffmail account
Rediff.com  » Getahead » Discovering the secrets of the singing bowls in Nepal 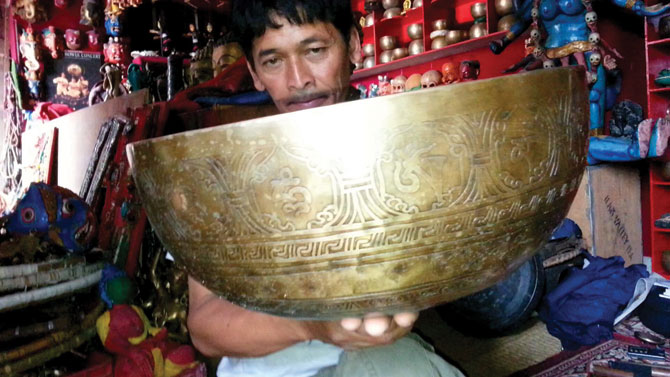 Shameem Akthar ventures to Nepal to learn the use of Tibetan bowls in meditation. And to enrich her soul

I had decided to do two things. Both in a single dream trip:

I wanted to travel out of India on my own -- hitting 50 is a good time to discover some things about yourself.

And I wanted to do a singing bowl meditation course in any Buddhist haven outside my country.

I thought of Bhutan. But decided on Nepal on a whim.

Planning a trip to Nepal is easy. Most of what you are looking for is online, including hotel bookings. In India, I was advised that the Thamel locality of Kathmandu would be the ideal place to lodge.

When I landed in Nepal I was happy I chose Thamel; though next time I visit I most likely will stay at the magnificent stupa complex of Boudhanath in Kathmandu.
Thamel had a surreal air to it.

A mix of races, like in some exotic gypsy film. It was not a trashy tourist destination, but a trekker's haunt. Though the crowd is casual, grunge, they were also very fit, self-involved and picky.

It had a classy hippie feel to it, if such an oxymoron works. For a 'spiritual shopper' it was a crazy paradise -- Buddha in all forms, stickers, fridge magnets, pendants, on bags, on T-shirts, on mousepads is available. There were ATMs and WiFi hotspots every few feet. Haunting Buddhist music followed you around -- the Tibetan chants become forever a memory glue for your trip.

I struck a bed-and-breakfast deal with Hotel Florid (hotelflorid.com.np) and it was perhaps a wise thing to have done. It was a family-maintained small establishment. The whole family lived on the premises. The rooms were small, compact, secure and it felt like home.

My whole trip was planned around pursuing the singing bowl meditation course conducted by singing bowl teacher Shree Krishna Shahi. I discovered after landing up at Thamel, that Sabin was the brother to another Thapa who conducted an Ayurveda massage course at the Sivananda centre at Thiruvanthapuram, Kerala, India. This connection made it feel safe, cozy and fell in place beautifully, as if I was meant to learn all about the bowls.

And also I liked the idea of travelling to get to know a place closely, instead of just superficially skimming it as a visitor.

I would rather be with the locals, live their lives for a short while. So planning the course was just a ruse to have all of that on a platter. 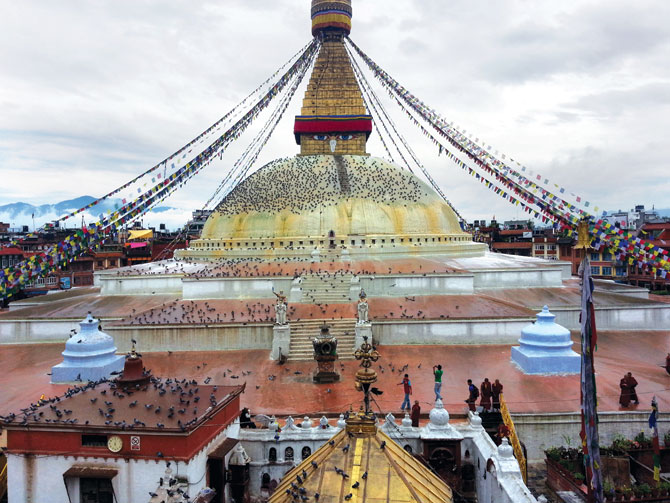 The Kathmandu Healing Centre, managed by Sabin, offers an escort to the venue of the course, plus lunch, with the teacher. You would need the escort because a bandh (shutdown) in Nepal means no movement of public transport, including the rickety taxis. But motorcycles -- and in Nepal, raincoats are designed to cover the pillion rider too -- are allowed, as also movement by foreigners, who will not be harassed for moving about.

I landed up at the venue of the singing bowl meditation course, the Swayambunath Stupa, a world heritage site and my jaw dropped. It was unbelievable. En route I saw an enormous prayer wheel, a magnificently large vajra. The monkeys were not aggressive (unlike back home). Monks in flowing maroon robes, tourists of all types, believers milled about and a circuitous white wall embraced all this.

Everything was clean in and around the complex (except the toilets; only for emergencies and carry hand sanitiser and a toilet roll). Shops in the complex had the widest representation of Buddhist iconography.

The hauntingly beautiful Tibetan chants, of course, were everywhere. So were cheerful prayer flags; said to carry your prayers into the winds and bring them back to you, when you need them.

At the main stupa the rim of the prayer wheels was touched by thousands of hands, wishing and praying. The original austerity of Buddhism sacrificed at the altar of extravagant representation… but how.

We took a shorter route in, while pilgrims walk up the 365 steps said to represent the number of days in a year. Ahead of us, his hands on his hips, surveying the scene, was Shree Krishna Shahi, looking regal, yet inconspicuous, quite belying the fact that he has travelled around the world, creating the enchantment of the singing bowls and their healing, wherever he goes.

I do not know all this, when I met him. The online communication I had with Sabin does not mention it. 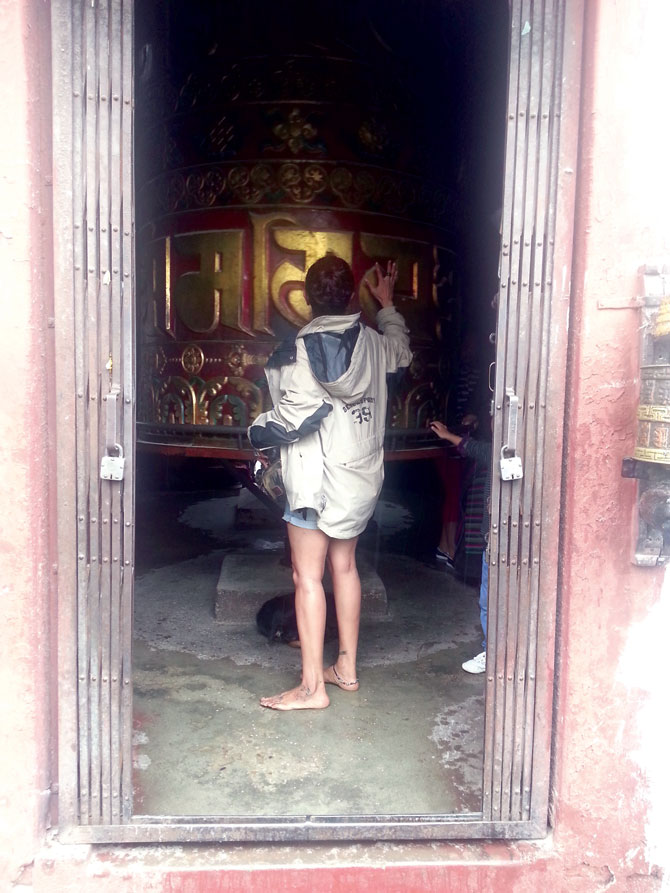 So, the first day I was blundering about the bowls, awkward, jerky with my gongs. Yet my eagerness helped me pick up the theory very fast. It is the practice of simplicity, the softness of striking the bowl, the ability to wait for the deep sound waves to complete their flow, all of which is a form of art which I am still struggling with.

When I signed up for the course, I just wanted to learn to be able to have a steady hand while playing a single bowl. I realised the singing bowls cannot be seen in isolation, they are a package deal.

Each of the special bowls has a dominant musical note, which corresponds to a chakra (somewhat like the Indian classical music's sa-re-ga-ma which too is said to correspond to the chakras). It is exciting to see how the electronic tuner (used to set Western musical instruments like the guitar) can catch this dominant musical note.

So a set of seven bowls was selected, after some serious rummaging through hundreds of such bowls, and this set also must align with one another, somewhat like how the notes must string together in a classical Indian raga.

It was exciting to see this mathematical calculation behind the creation of a set. More exciting was the experience of the vibration of the bowls themselves.

As an over-enthusiastic amateur I realised to my chagrin that I banged and dashed my gongs on the bowls with an abandon that created a harsh sound and was far from the healing softness required of them.

Else sometimes the sound was very soft. But the vibration the bowl created can be a very visceral experience. Healing happens through how controlled the vibration is.

But learning with Shree was much beyond technique. He speaks English with a lilt and flavour distinct to his community. He would say lyrical things like: "You must wait for the bowl to talk to you." 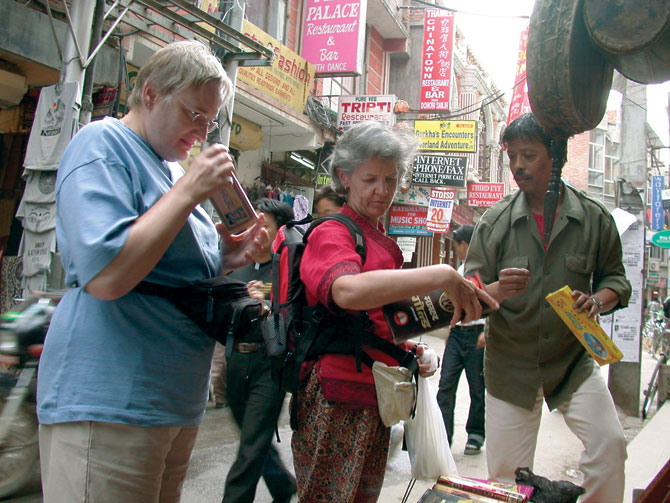 Though the three-day course may be expensive by Indian standards (Rs 30,000 or $500) -- it was the generosity of Shree's sharing of as much as you can take that came through. If you learnt fast enough, he taught fast enough. There was a lot of sharing, beyond technique, that he taught me and which will stay with me forever.

If someone could be soft yet firm, it was him, as a teacher. If I talked too much, as I am wont to even now, he would not tell me to shut up. But he would smile and say thank you firmly. It was the intention, he taught me that should be communicated.

So, what do you intend to do with the bowls? He did not ask me, because he felt intuitively how excited I was about learning to play the bowls, and how it was going to be part of my life forever.

There is something in the sound of the bowls -- their vibration -- that reached beyond the ordinary. That led your soul back home, to where it felt it belonged.

And how haunting the passage back home was that haunting in the low ululation of the blows, so soft, as to be almost not there.

There were more things I learnt: On how less is more, with the bowls. And on how intention should not block the execution. And where enthusiasm may be curbed. Where giving could be all that was required, and where you got a lot more, through just giving.

Between the lessons, when we took lunch or a tea break, Shree would share his experiences. I learnt, just as much, may be more, in those intercessions. And how a small trip like this could lead to a larger journey, inwards.