Sign in  |  Create a Rediffmail account
Rediff.com  » Getahead » Jab We Met: 'We were 16 when we fell in love' 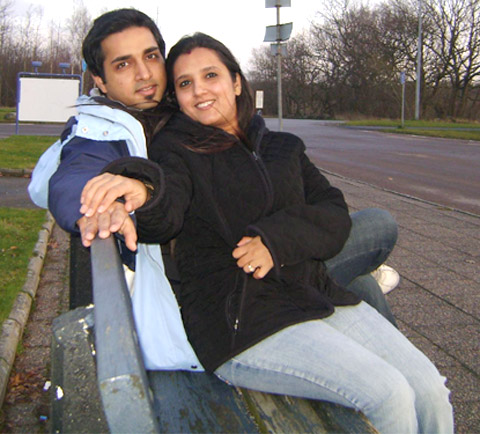 We invited you, our readers to share your love stories with us. Here reader Anil Gupta from Delhi tells us how he met the love of his life and how the challenges they faced before they eventually got married.

In March 1997, I had just completed my class 10 board exams and had gone to see a movie with my friends at Odeon Cinema in Delhi.

One of my friends had called his girlfriend for the movie who brought her younger sister (Pooja) with her.

All of us sat down to watch the movie and Pooja happened to sit on my right. I was very shy when it came to talking to girls and taking an initiative to start a communication.

I was more interested in watching the movie rather talking to a girl sitting next to me.

We were watching the Govinda and Karishma Kapoor starrer Hero No 1 and I still remember a comedy scene where Govinda rides a scooter and I laughed like anything.

That was the first time I saw Pooja laughing more at me than I did after watching the comedy scene!

After that, being an introvert that I was, I stuffed myself more into the seat than ever.

But, to my and everybody else's surprise, towards the end of the movie, we had already asked each other's names.

After the movie got over, everybody said their goodbyes and the boys and girls happily went home in separate autorickshaws. Things were pretty normal for everyone but I somehow (forced by my friends) felt that I should call Pooja once. I called her up and we chatted for five minutes. I don't remember what we talked but we certainly decided that we are going to talk more often from then.

Our second phone call a few days later was more interesting and sounded funny too.

It is true that neither me nor Pooja recited these lines in reality when we left but there was something which we both felt for each other.

'Love at first sight' is what I have heard people call it.

Since that day, we started talking to each other more often and she also gave me a nick name 'Gumshuda talaash kendra' as I was lost in the movie while a girl was sitting next to me.

Over time, we also realised that almost all of our interests matched.

The first match was of course the best bollywood actor. No prizes for guessing that actor Shah Rukh Khan was the binding string in this case.

The interesting thing is that we did not meet even though both of us lived in Delhi and were only 10 kms away from each other for until six months. Our love story was not affected though.

The biggest reason for not meeting each other was the non-availability of a vehicle at my end. Besides, I had no money to spend on a date!

'We first held each other's hands after 1.7 years of dating'


After six months, when I had saved Rs 300 for a date, I borrowed my friend's scooter and went to meet her.

We met several times after that and used to spend most of our time sitting and chatting in a public park. I remember that in all our dates, we had to find a new bench in the park as most were occupied with other love birds.

We had seen all seasons in the park together sitting under a tree – we enjoyed the summer and the winter sun in the open. Rains were a bit difficult to manage but that also brought us closer.

We first held each other's hands after 1.7 years of dating and had our first kiss after three long years.

She never asked for anything fancy from me as she knew that I was still studying and had no money to spend.

To cut a long story short, our romantic affair lasted 11 long years. We fell in love when we were 16 and today, we are 27. We have seen several ups and downs of life even though we were not living together. We fought, cried, laughed and enjoyed our time together.

There was some bond that kept the relationship alive. She was always by my side even though I had virtually no money to spend on our dates in initial nine years.

But, now I am well settled with a good job.

We were pretty happy to introduce each other to our families for marriage. Pooja's family was happy and agreed to our relationship even though it was an inter-caste marriage.

The real problem started when I spoke to my family and they showed our kundlis (horoscopes) to a pundit. To our surprise, we found that Pooja was maanglik and I was not.

All that crap of groom facing death after marriage and other serious consequences followed and suddenly nobody in the family agreed to our marriage.

I fail to understand how can a planet sitting millions of miles away can actually turn violent as soon as you get married. The same planet probably had helped us live through the good 11 years and nothing bad had happened.

I spoke to many astrologers to get a second, third and fourth opinion and each one had different view points about the maanglik and non-maanglik combination. Some were positive but a majority of them were negative. I even convinced Pooja to change her name to Maahi as suggested by some astrologers.

But, I could not convince my family to change their mindsets.

I was feeling helpless as it was really difficult and unimaginable to break a bond just because the kundlis did not match!

On one side, I was not able to digest the fate predicted through our kundlis which affected my family's decision and on the other end I was not ready to leave Pooja.

Eventually, the same old best friends who were with us during our first meet came to our rescue and gave me the confidence to take a decision.

I opted to marry Pooja and decided not to take any pundit's advice. I also decided our marriage date on my own. No suggestions for auspicious muhurat were considered.

We got married exactly after 11 years of our journey in March.

However, we continue to cherish and celebrate our 'first meeting anniversary' on 25 March 1997 more than our marriage anniversary.

As a matter of fact, we will be completing our fifth year of marriage this year.

I think the infamous planet 'Mangal' has only strengthened our relationship as opposed to the common perception of breaking it.