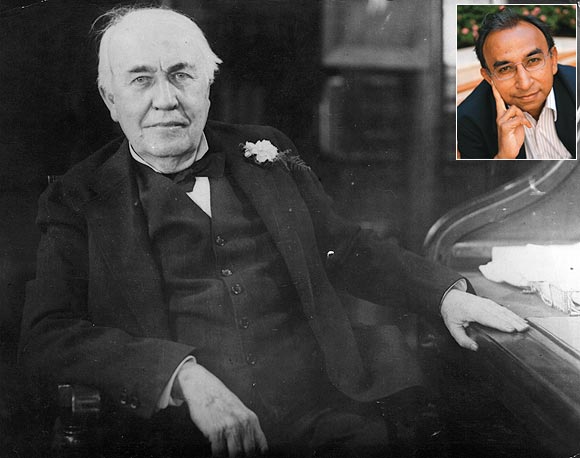 Not big on formal education qualifications, the American inventor looked for people with open minds and lots of curiosity!

You've probably heard of the Microsoft interview and the questions they ask prospective employees there ("How would you move Mount Fuji?").

We all have our own stories to tell about the weird questions we got asked at a job interview or a personal interview at a b-school. But have you heard about how Thomas Alva Edison -- the great American inventor -- interviewed people who wanted to work with him? There's an interesting story there!

After the initial round of questions, if Edison came across a bright candidate, he would take him out to dinner before making up his mind on whether to hire.

The interview would continue over dinner, and when the food arrived, Edison would take a  bite and remark, "I think this needs more salt!" And then he'd watch the candidate.

If the candidate tasted the food  and then decided whether to add the salt -- Edison would hire him. But if he added salt first before tasting the food -- the person would not be hired.

Edison knew that people who easily believed what other people had to say, or made assumptions without first hand knowledge or experience, would not be able to look afresh at problems and find innovative solutions!

They would have closed minds, he reckoned. Edison was looking for people with a mind of their own -- and the conviction to back it.

Has it happened to you that you heard from friends about how difficult it is to get into the IITs and IIMs -- and you then make up your mind that it's very tough and you won't make it there? You then approach the entire admission process with an "I can't do it" attitude. In many cases, we even give up without trying, assuming that we can't do it -- simply because someone else can't do it.

That's no good. And it probably sets you up for failure. Maybe CAT was tough for a friend but you do know that enough people clear the test every year, so no reason why you can't!

Go through it with an open mind -- a positive, can-do attitude -- and the results could be surprising. Talent and intellect are nice to have -- but it's the willingness to give it a shot -- a 100 per cent effort -- that usually makes the difference.

In fact, if you are looking for inspiration, you need look no further than the life of Thomas Edison. The man who invented the light bulb and also founded General Electric was atrue genius.

He was not a great student at school, and had to be pulled out and educated at home. Edison was also hard of hearing. None of that mattered. Edison went on to become a prolific inventor with over a thousand patentsto his credit.

Do you blame your schooling for coming in the way of your success? Do you find yourself blaming your limitations for your failures? Don't. If he could do it, you can too.

Edison famously remarked that "Genius is 1 per cent inspiration, and 99 per cent perspiration".

Now that's a great line to live your life by! Most of us spend a lifetime waiting for the inspiration, instead of sweating it out and slogging at whatever we set out to do. More often than not, success is the result of hard work -- not great ideas.

Remember that. And yes, don't add the salt!