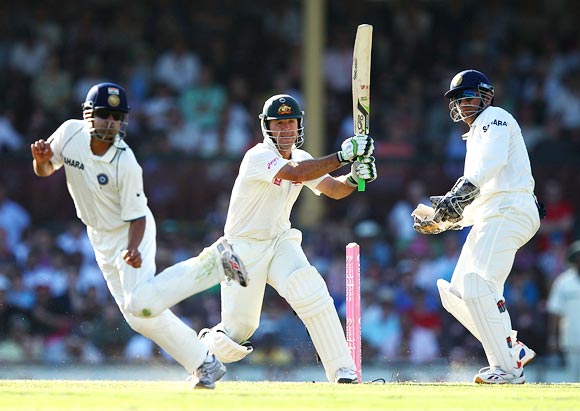 Image: Ricky Ponting
Photographs: Rediff Archives
You can often learn vital life lessons by listening to achievers. Their secret to success may be hard to emulate. But it can be the trigger you need to change your beliefs, says Prakash Iyer.

Here's a little story about Ricky Ponting, arguably one of cricket's all-time greats.

Ponting is one of only three cricketers to have scored over 13000 runs in test cricket. He has to his credit over 70 centuries in tests and one day internationals. And when it comes to placing the ball and finding the gaps in the field, Ponting was acknowledged as the complete master.

Someone once asked him the secret to his ability to find the gaps in the field. His answer was simple, yet revealing.

He said, "Every batsman surveys the field before taking strike, and usually the fielders get imprinted on his mind. They can almost see every fielder in their mind's eye. But in my head, I don't see the fielders. I only see the gaps!" And that -- as his tally of runs shows -- made all the difference.

We could all take a leaf out of Ponting's book. Don't focus on the obstacles.

Look instead for the opportunities. Because life -- in many ways -- is like a game of cricket. Your job is to score runs.

There will be fielders out there who will stop you from scoring those runs. There will be an opposing captain who will try his hardest to place the fielders in a manner that will make it difficult for you to score those runs. Your job is to find the gaps.

We all face problems in our lives. We encounter hurdles that seem to block our progress.

We get obsessed with the hurdle -- and fail to observe the opportunities that may be opening up in front of us. We focus on the problem -- rather than on the solutions. And as psychologists have proved, what your mind focuses on, tends to grow.

Focus on the problem, and it will look bigger and more difficult. Focus on your ability to solve the problem -- and bingo! -- you will feel more empowered to take on challenges. Has it happened to you that you accidentally hit your foot against a table -- and hurt your little toe?

That little toe-niggle seems to be on your mind all the time. And more often than not -- you will find yourself banging the same toe again -- and again.

What you focus on -- tends to grow! How often has it happened that someone told you, "Be careful, don't drop the glass!" And -- crash -- you dropped it!

There's a story that a former West Indian wicket-keeper likes to tell. He says it changed his approach to the game and life itself. Playing a test match, he hurt a finger rather badly while attempting a difficult catch.

He was in considerable pain, and went off the field to have it attended to. Meanwhile, the team had to make do with a make-shift wicket keeper -- and that wasn't helping the team's cause. The coach wanted the injured wicket-keeper to get back to the field.

"I have a broken finger" the wicket-keeper protested. "Yes," said the coach. "But you have nine good fingers, don't you? Now get back with those nine good ones!"

In life, you cannot control where the fielders are placed. Nor can you do much about the little finger getting injured. But you can choose your response.

Train the mind to focus on the fielders -- or on the gaps; on the one broken finger -- or the nine good ones; on the obstacles -- or the opportunities. The choice is yours!

Next time, you see a problem or an obstacle, think the Ponting way. And see the gaps!