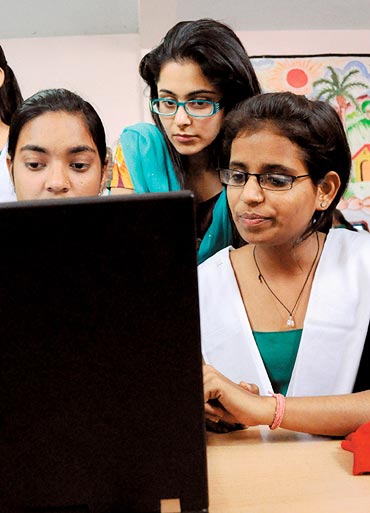 Image: Students from Chetram, engrossed in editing films at their workstation
Photographs: Rajat Rao Merril Diniz
Technology, creativity and team work are encouraging students from underserved communities to express themselves through short films. Read on for some examples.

Ved's father wants him to be an engineer. But the creatively-inclined Ved aspires to be an artist. Sounds familiar?

A typical Indian scenario, Ved is the main character of a short video feature film produced by students of Chetram Sharma Kanya Interschool in Sadarpur Gaon, Noida. Why did they choose this topic?

Along with teachers, the girls toiled for six months to make the film. This involved all aspects of the film-making process -- conceptualisng, scripting, directing, shooting and editing. A lot of work for a film of under one minute, yet, the thrill of the journey is evident!

One student raves about her experience of "news reporting," that is, interviewing all the stakeholders as part of initial research -- parents, students and teachers for their take on the subject.

Another was on a high on writing the script. Yet another was engaged in painting Ved's artistic works portfolio to be featured in the film. Some enjoyed scouting for venues, shooting with video camera and tripod, and playing with footage on the edit suite. Their teacher Amarjeet Kumar Chaurasia doubled up as Ved's father, false beard and all, and a student from the neighbouring boy's school played the role of Ved.

But that's not all. Simultaneously, the girls worked on another film, which highlighted a menace -- eve teasing -- something they are subjected to ever so often, they exclaim in unison.

Just like the girls at Chetram, students from underserved schools as well as NGOs, in Delhi NCR, Bangalore, Hyderabad and Bhubaneswar, worked on film projects that highlighted many an issue, the brunt of which they have experienced firsthand -- water shortage, child labour, poverty and population overload. 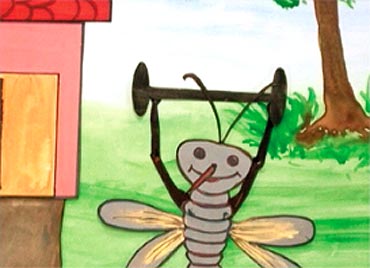 Image: Student's illustration of an aedes mosquito flexing his muscles with a dumbbell before spreading dengue
Photographs: Careers360
Inclusiveness is a recurring theme. The students of DTEA Pusa Road explored a young tea boy's yearning for school education.

A film on Eye donations -- so that blind students can experience the colours they paint in art class, was presented by students from Akshay Pratishthan.

Some went a step ahead and focused on the solutions, like the students of Jamia Middle School who did a 101 on RTI (Right to Information), and depicted the true story of Kulsum, a little girl who used this tool to procure the elusive ration card for her mother. Serious subjects, yet the storytelling is playful, engaging, and witty.

It's pretty evident that the girls at Chandra Arya Vidya Mandar have a wicked sense of humour. They showed an aedes mosquito -- transmitter of deadly dengue -- flexing his muscles with a pair of dumbbells before entering an unsuspecting home!

Students used illustrations, and designed sets and characters using chart paper, thermacol, puppets and other materials. DTEA Mandir Marg's film on tigers made its point with a burst of colours and textures, a visual treat for the eyes!

Some painstakingly used 2D animation to tell their stories. Like the students of Rani Dutta Arya Vidyalaya in Daryaganj, who depicted water as a rebellious but endearing droplet that constantly resists gushing out of taps and hose pipes!

The films are produced using software like Adobe Premiere Elements 7 (a software that combines a video editing software) and Photoshop (often used by many of us to appear more photogenic), and the projects are part of Adobe Youth Voices, a worldwide initiative by computer software company Adobe System Inc.

The aim of the programme is to empower children from underserved communities by helping them hone both technical and interpersonal skills, and it kicked off in India five years back in collaboration with Adobe's network partner American India Foundation.

Schools don't have to make a monetary investment 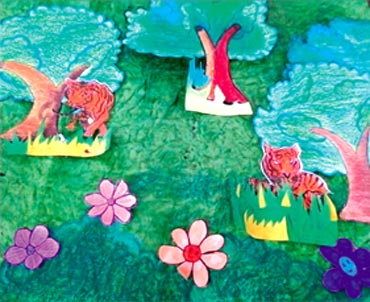 Image: Students used colourrful illustrations to spread message about saving tigers
Photographs: Careers360
The programme was also launched in the US and UK, and today it is running in 45 countries!

The schools don't have to make a monetary investment, as workstations are provided by AIF whereas the software and technical skills are taught by the Adobe Foundation and Adobe Systems, though the schools would need to pay for their own electricity and maintenance of the work systems.

Currently running in 43 schools/ NGOs in India, the programme has become a hit among teachers and students, and has been extended for another five years in India.

In fact, 10 more sites will be added to the kitty in 2011-12. Adobe employees are encouraged to volunteer their time and skills to help train teachers and mentor students. Once a year, students accompany their teachers to a screening of all documentaries, followed by an award ceremony and lunch.

At this year's ceremony at the India Islamic Cultural Centre in Delhi, one saw young Adobe employees managing the show -- compering, interacting with students and even entertaining them with stand-up comedy! As mentors, they must motivate students to think creatively and teach them how to better use digital technologies to voice their thoughts on community issues.

But in most schools, learning starts from scratch.

Class 11 Economics teacher Mahesh Kaushik from Rani Dutta, who will be accompanying his students to the Global AYV Summit in California in August, had never used a computer in his life.

He attended educator training sessions at the Adobe office in Noida to acquaint himself with the software, so that he could in turn teach it to his students. But participating in the AYV programme also means investing extra hours at school for no extra pay.

Bigger picture is to encourage creativity, self-expression and team spirit 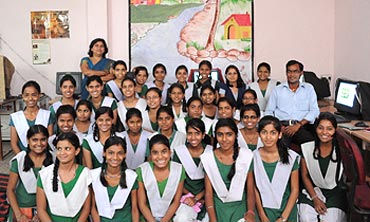 Image: Students from Chetram Sharma Kanya Interschool in Sadarpur Gaon, Noida
Photographs: Rajat Rao
What then is the incentive for teachers?

"My subject is little dry. I am able to be creative," says Mahesh who seems very excited that his student Sahil can spruce up a poor image using Photoshop, in a jiffy.

Teaching assistant Amarjeet who is pursuing an MCA, part-time, maintains all the computers, and wants to combine his interest in technology and education, to carve a niche from himself. Interestingly, some teachers make visual presentations to teach their own subjects!

Though the programme makes one technology-savvy, which is a definite aim, the bigger picture is to encourage creativity, self-expression and team spirit so that students and teachers can engage within and outside their community more effectively.

Becoming career-oriented, seems to be a by-product. All the girls of Chetram, vociferously expressed a desire to pursue higher education and join the workforce.

Doctors, software engineers, nurses, lawyers, artists, company secretary and lawyers, journalists, were on their wish list. One girl said she wanted to become a doctor and treat the poor people of her community. Another wanted to be a documentary film-maker.