Sign in  |  Create a Rediffmail account
Rediff.com  » Getahead » By eating less, he wants to power an orphanage in AP

By eating less, he wants to power an orphanage in AP 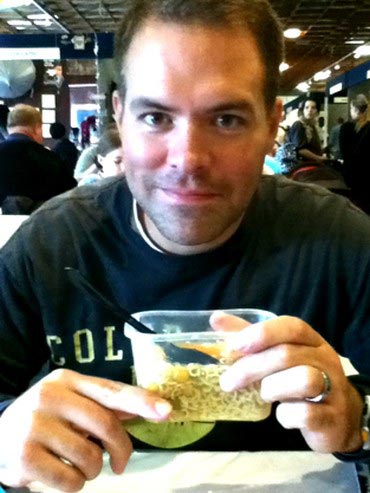 Image: Nathan Adair
Photographs: Pagalguy Lajwanti Dsouza
Do you know what this UK-based MBA student's novel b-school project is? He plans to live on less than a dollar a day and bring power to an orphanage in Andhra Pradesh, India. Intrigued? Read on.

What can you do with Rs 45 in your pocket? Not much, you would say, given the rising costs of just about everything -- but not for Nathan Adair (32), who is pursuing his MBA from UK's Westminister University.

As part of his b-school project, Nathan is living on less than a dollar a day, (for a total of 30 days) to identify with more than 1 billion people globally who live on $1 a day or less. He expects, that his feat will help him raise money (what he saves by consuming less) and awareness (publicity and funds) to get across electric power to an orphanage in Andhra Pradesh where 'electricity' is a foreign word.

How does all this connect to his MBA project? Nathan plans to present the process of financing, designing and implementing this micro-enterprise business to get solar energy to the village, as his project.

'Kids are digging through trash looking for food' Image: A snapshot of what Nathan's dinner bowl looks like these days

When deciding on what to base his MBA dissertation/project, Nathan decided to choose a topic that would make a difference.

"I did not want to simply piece together an academic report that would benefit no one," he says. Nathan and his family have been supporters of Peace Gospel (an NGO) for a number of years, so he met its Director, Kirby Trapolino who discussed various initiatives that Peace Gospel does as part of its existence. Primary among them, was getting in solar energy at a few of its missions.

"So, after brainstorming, we decided to create a solar micro-enterprise scheme for this particular orphanage in India where Peace Gospel works," says Nathan.

Peace Gospel empowers missions through micro-enterprise initiatives like animal stock breeding, dairy production and farming."This 'business model' fit nicely into trying to create a project for my MBA.Since there is a huge need for reliable electricity in this community, I know my effort would work perfectly," Nathan added.

The first four days of Nathan's 30-day experiment (of eating less than a dollar's worth a day) were the most difficult.

"A combination of eating approximately 30 percent of the calories normally consumed and giving up caffeine made for a miserable beginning," he confesses.

"However, the overwhelming support and prayers from my wife, family and friends gave me the resolve I needed to press on and not give up," he adds. Most of Nathan's meals today, consist of rice and beans or potatoes, carrots, chickpeas with lots of water.

Before the experiment, Nathan's meals always had salmon and/or chicken, milk, coffee and he also went out to dinner occasionally.

Ironically, one of the biggest hurdles Adair has been encountering with his experiment is planning his daily menu and the substantial lack of energy. "But it's still worth the effort, because I am gaining a new understanding of how much of the world lives. People who live on $1/day or less see food as an essential fuel to stay alive, and they don't take that for granted," he told.

Nathan has been requesting his blog's readers to participate with him on a one-week schedule. "It's very humbling to think that at this very moment, kids are digging through trash looking for food," Nathan is reported to have said in a magazine adding that he wanted people to realise "our Western lifestyle is luxurious compared to most. I have been very blessed in this life, and I want to give back as much as possible."

Though Nathan feels generally healthy, his energy levels are low, especially in the afternoons."Without proper protein and vitamins, it is difficult to stay fit. It definitely effects brain function as well," Nathan says. Ten days to go for the experiment to draw to a close and Nathan has lost some 17 pounds so far.

His mother was, naturally, concerned for his health and energy 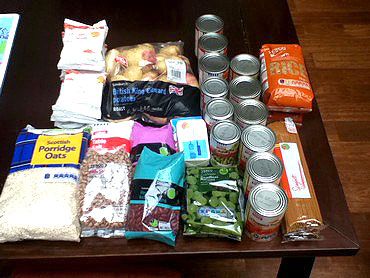 Image: A snapshot of Nathan's grocery list posted on his blog
Photographs: Nathan Adair
How did family, friends and his school respond?

Nathan's Dissertation Supervisor at the University of Westminster, was very supportive about the project and encouraged him to do it. As for family, his mother was, naturally, concerned for his health and energy.

Nathan's wife who is an MBA graduate herself is also living on $1/day for this week, complying with Nathan's blog request.

"Many followers of the blog have joined me this week by sacrificing different things.Some are living on $1/day, or not eating at restaurants this week, or giving up coffee. Most of them will donate their savings to the solar project," the Westminister University student says. As for friends, all of them first offered to bring his food, or take him to dinner but when Nathan explained that he had already bought whatever he needed for the month, they understood.

Nathan's interest in the solar initiative began in 2010 when he learnt of the solar efforts being made in orphanages in India and in the Republic of Chad by Peace Gospel Both orphanages are located in sunshine-abundant regions, making for the perfect conditions to go solar.

After a successful test-run of the basic system at the India orphanage, Nathan decided to help in the expansion of the project so that the entire orphanage campus get sufficient power. "The expansion will cost approximately $25,000 and the estimate from the installer is good through October 31," says Nathan.

'We foresee the system paying for itself in about 5 years' 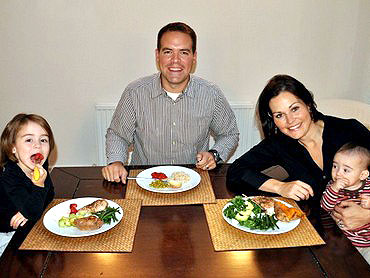 Image: Nathan with his family at dinner

In addition to providing the opportunity to go "off the grid," the system will also allow Nathan and his fellow thinkers to rent out additional power cells (charged car batteries). Villagers will be able to rent these batteries in order to power lights, fans and small appliances in their homes, thus drastically improving quality of life.

"Local businesses will also be able to rent the batteries to run appliances and mobile PA systems. Thus the new system will not only provide all of the orphanage's power needs, but will also create a steady revenue stream from the power cell rentals," says Nathan.

The MBA students expects that once in place, the system will provide a savings of $3,600/year.

"We're conservatively projecting revenue of $1,200/year from the solar-charged power cells rental business and that figure should grow in the following years. Thus we foresee the system paying for itself in about 5 years. What's more, with the savings, we should be able to bring in more orphans almost immediately," adds Nathan.

Nathan has ten more days to finish his project (eating less). So far, he has saved $334. All this money will go towards the solar project. Nathan is now also seeking corporate sponsors as raising the full 25K in one month will require some large donations.

Through the blog and various online media outlets, the word is quickly spreading and Nathan has been fielding questions from across the world -- US, UK, Brazil, Bhutan, India, Singapore, Malaysia, Australia. Nathan hopes to come down to Ongle village once the entire work is done.

Meanwhile, he is also preparing notes for his project to present to his class. Nathan is keen to complete his MBA and he thinks the MBA will broaden his global network and gain valuable business skills and knowledge."Undergraduate degrees are becoming common now. An MBA will help me stand out more."

Well, one can say that Nathan Adair has already stood out, globally that too.