News
Business
Movies
Sports
Cricket
Get Ahead
Money Tips
Shopping
Sign in  |  Create a Rediffmail account
Rediff.com  » Getahead » 'With NEET, only merit plays a role. Money has no place'

'You must understand that NEET is in its infantile stage.'
'When a child falls down while trying to stand up, you don't say it will never walk or run.'
'The child that falls down several times while trying to stand up may one day run a race at the Olympics.'
'Similarly, if there is firmness in approach and the willingness to listen to suggestions, NEET will be a great success.' 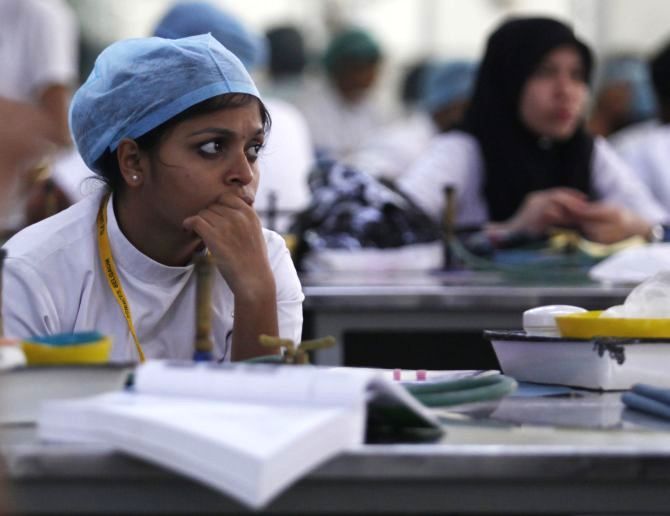 Students who wish to pursue any medical course in India, have to clear this entrance test.

"I am for one country, one examination... We have created a level playing field by introducing NEET," Dr Bhirmanandham tells Rediff.com's Shobha Warrier.

You were part of the team that recommended NEET. Was the idea behind NEET to have a common entrance test like JEE?

In 2009, Dr Vedprakash Mishra from Pune and I were asked to design a method that would end to the huge donations taken by private medical colleges all over India.

We sat together for days going through various documents, including the 12 high court judgments which pronounced that only merit should be the criterion for the selection of candidates to medical colleges while maintaining the Constitutional reservation for scheduled castes, scheduled tribes and other backward castes.

At that time, there were 31 deemed universities, one entrance examination for each state and one central medical examination.

It was impossible for a student to go around the entire country writing all these entrance examinations.

A single entrance exam for the entire country, for all medical colleges whether they were run by the state, the centre or private institutions, would benefit the students.

Another aspect we took into consideration was that a lot of malpractices were taking place because of manual evaluation; we wanted to get rid of that.

We decided to have a common syllabus based on which questions could be set. 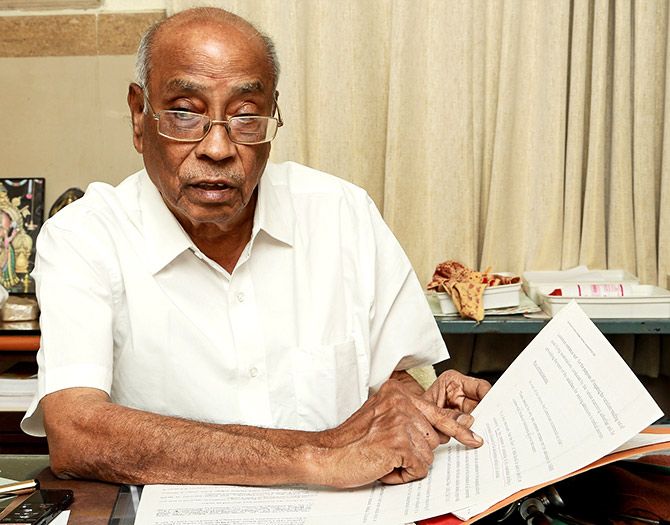 Did you prescribe any particular syllabus?

We said it should be based on a structured syllabus that took various state and central boards into consideration.

We mentioned that this syllabus should be announced well in advance so that students have enough time to prepare for the examination.

We submitted our report on June 9, 2009, to the MCI president and it was okayed by the general body.

Unfortunately, it was struck down by the Supreme Court which said it was only a rule and not in the Act.

In 2010, the MCI was dissolved by the President of India.

When it was reconstituted again in 2013, I was unanimously elected as vice president and we wanted to revive this particular proposal.

was it because money played a major role than merit in most deemed universities?

I cannot say that on the record, though all of us know the reality.

With NEET in place, money cannot play any role.

We are satisfied that we developed a foolproof method where only merit plays a role even as we preserved the constitutional reservation. 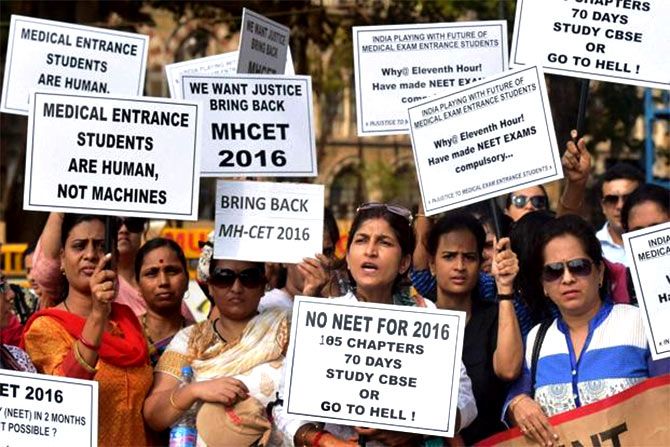 JEE has been there for quite some time and, through NEET, there is a level playing field for students from all over the country.
Why are the political parties in Tamil Nadu objecting to NEET?

That's exactly what we are saying.

I am for one country, one examination.

When people belonging to the rural areas of other states have accepted NEET, why should there be a problem here (in Tamil Nadu)?

Yes, we have created a level playing field by introducing NEET.

Since the questions come from a structured syllabus, you cannot have any complaints.

By eliminating manual marking and opting for computerised corrections, there is no room for any error in correction also.

Do you feel students from the rural areas are at a disadvantage?

Once you raise the standard of the syllabus in all the states, there shouldn't be any disadvantage.

Yes, it takes some time for everyone to catch up.

In two-three years's time, we will see students from all states, including those from Tamil Nadu, performing equally well.

Tamil Nadu is not a backward state. In fact, it is one of the most advanced and literate states.
While students from Uttar Pradesh, Rajasthan, etc scored extremely well in this year's NEET, one state fared very badly. Tamil Nadu...

That is because politicians from UP, Rajasthan, etc accepted NEET and encouraged students to prepare for it.

Here, politicians said there was no need for NEET. So, there was a slackening on the part of the students who thought NEET would not be needed to get admission into a medical college.

Now, students have realised that NEET is here to stay and they have to prepare for it.

You will see a different result hereafter. 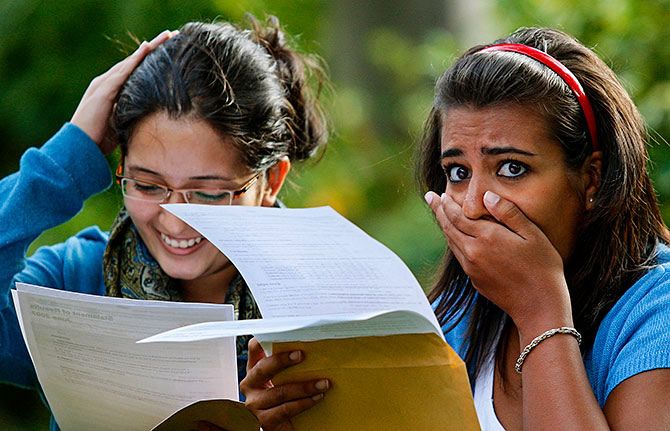 *IMAGE: 'Tamil Nadu's politicians said there was no need for NEET. So, there was a slackening on the part of the students who thought NEET would not be needed to get admission into a medical college.' Photograph: Phil Noble/Reuters

Are you happy with the way NEET is being implemented? What shocked everyone this year was students with negative marks in one subject getting admission.

When you are conducting an examination in three subjects -- chemistry, physics and biology -- and taking the aggregate of all the three subjects, how can a student with zero marks in chemistry or physics get admission in a medical college?

If you think the marks in chemistry and physics are not essential, why do you conduct exams in these two subjects?

After making the students give the examination in three subjects, it is not correct to say that a minimum mark is not required in physics and chemistry and only the aggregate counts.

I made this clear at the MCI meeting and also to everyone who asked me my opinion.

It is absolutely essential that a student gets minimum marks in all three subjects even if s/he has pass mark in the aggregate.

Then, there was this confusion about 49 questions in Tamil and the high court asking the authorities to award 196 marks to all the students who wrote in Tamil...

The judgment to give 196 marks to those students because the translation was unclear is not right.

You cannot assume that all the students who wrote in Tamil will write those 49 questions.

Giving 196 marks free to all of them is going affect the rank list.

The whole purpose of the examination itself will be lost because it is going to affect the rank list.

In my opinion, the court should have asked NEET to conduct an examination for those 49 questions and evaluated them.

Or, they should have given marks on pro-rata basis. That is, deduct 49 from the total of 180 questions and whatever marks they get from that can be evaluated in a pro-rata manner.

If the judgment had followed any of these methods, it would not have affected the rank list.

Don't you think allowing students with zero marks in one subject to apply will set a bad precedent and affect the quality of doctors?

What kind of quality can you expect from a student who gets zero marks in chemistry or physics?

That is why I want to stress on the fact a minimum mark is needed in all three subjects, and not just the aggregate, for a student to qualify.

Let the members of the MCI decide what is the minimum mark required in each subject is and implement it soon.

I remember an incident that happened when I was the vice chancellor (The Tamil Nadu Dr MGR Medical University, 2002-2006).

A student who got good marks in theory but did not appear for the viva voce was declared failed. He appealed, saying his theory marks had ensured he had passed.

I was firm in my decision that he had to be failed as every student was supposed to appear for both theory and viva.

Similarly, a minimum pass mark or knowledge of all three subjects is required for a student to get admission in a medical college. 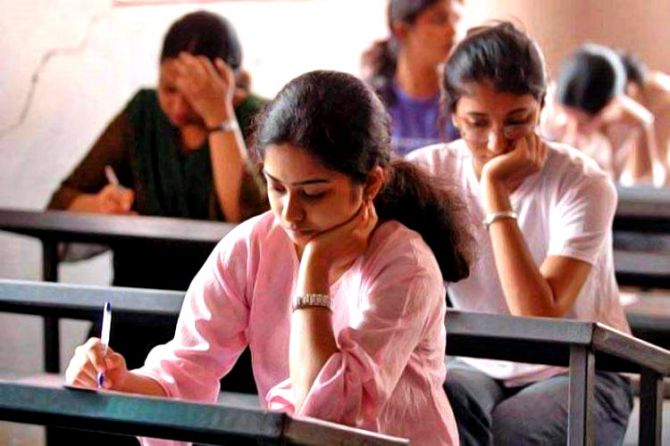 *IMAGE: 'By conducting the examination online, there is no question of the question papers leaking.' Photograph: PTI Photo

Next year onwards, the Centre wants to conduct NEET and JEE online, twice a year. Is it a good idea?

It is a very good idea and I welcome it.

This gives a student who didn't do well the first time a chance to write the exam again after six months. S/he need not wait for another year to do so.

You can take the best of the two scores.

Also, by conducting the examination online, there is no question of the question papers leaking.

As a person who is behind recommending the idea of NEET, are you happy with the way the examination was conducted in the last two years?

You must understand that NEET is in its infantile stage.

When a child falls down while trying to stand up, you don't say it will never walk or run.

The child that falls down several times while trying to stand up may one day run a race at the Olympics.

Similarly, if there is firmness in approach and the willingness to listen to suggestions, NEET will be a great success.

What is NEET's biggest achievement?

Only merit plays a role now. Money has no place.

*Images published only for representational purposes. 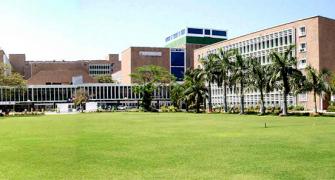 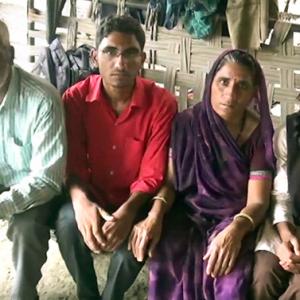