News
Business
Movies
Sports
Cricket
Get Ahead
Money Tips
Shopping
Sign in  |  Create a Rediffmail account
Rediff.com  » Getahead » 6 months in a coma. 3 years in a wheelchair. But she never gave up.

'As a kid, I expected myself to be running marathons by 17. It kills you inside to know that you can't do something you expected yourself to do.'
Rayna Arya, who became a victim of a hit-and-run at age 12, may not be running marathons just yet, but she is back on her feet.
Her friend Kshamaya Daniel narrates the story of her incredible grit and recovery. 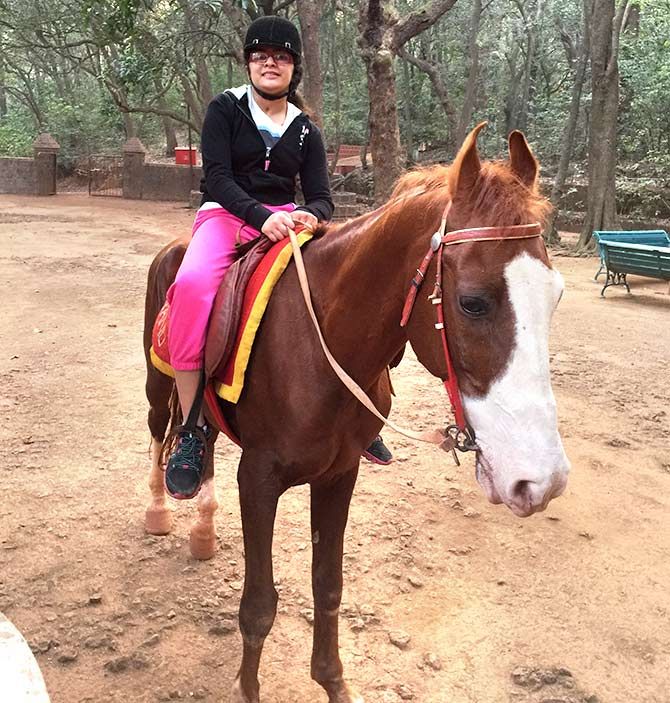 Though she was dealing with an accident even adults struggle to cope with, Rayna Arya crossed milestones that go way beyond her recovery.
She started doing pottery, interned with a veterinarian, performed at one of Mumbai's most happening live music clubs, held an exhibition of her paintings -- all while also focusing on her studies.
All photographs: Kind courtesy Rayna Arya

"It's for Rayna," I mumbled to myself five years ago as I stepped into the Cathedral and John Connon School's quadrangle, in front of all my peers from the eighth to the 12th grade.

They regarded me curiously, wondering what I was doing as I neared the stage. I couldn't have been a part of the soon-to-begin school play as I was in my school uniform.

Conscious of the 600 pairs of eyes on me, I removed the mini camcorder I had tucked into my pocket.

With shaking hands, I pulled the case off and slowly screwed it onto my mini 6-inch tripod. The tripod was too short for me to set on the ground to record, and there were no high tables or shelves in the quad for me to place it on.

"The tripod is small. But definitely use it or else you will get shaky footage," my mother had exasperatingly warned me many times that morning.

With no other ideas, I stood there, hair probably unkempt, dress maybe too short, holding the ridiculously small tripod in the air above my head, likely looking dreadfully funny in front of my entire school.

What else to do? Couldn't have shaky footage.

The camcorder beeped and the play began. 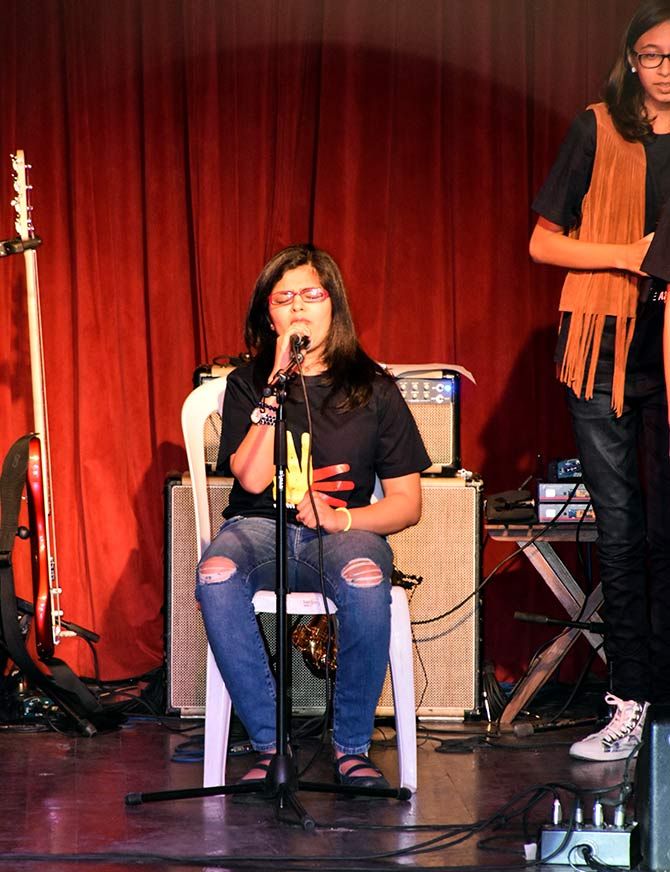 Rayna has had a special connection with music; it was the first thing she reacted to when she was in a coma.

After about six months in a coma and then a couple more in bed, it was no surprise that my good friend Rayna, the victim of a hit-and-run, was missing school and her friends.

A girl of merely 12 -- the same age as me -- made to face circumstances even adults would struggle to cope with.

The thought distressed me. I was ready to help her in any way.

So, I set out with my camcorder and tripod to make movies chronicling the goings-on in school for her to watch.

In those long months past, as Rayna explored the mysterious world of the comatose, her friends, unbeknownst to her, sat around her bed, talking to her as she slept.

Soon awake and smiling, but unable to speak, she would chat with them by tapping out answers on her iPad.

Two years later, one of her first sentences to me was, "Kshamaya, tell me the gossip in school."

Around the same time -- after three years in a wheelchair -- Rayna learnt to walk. A little unsteady, a little support here and there, but in no time, she was out at the movies, having lunch at the club and, soon, back in school too. 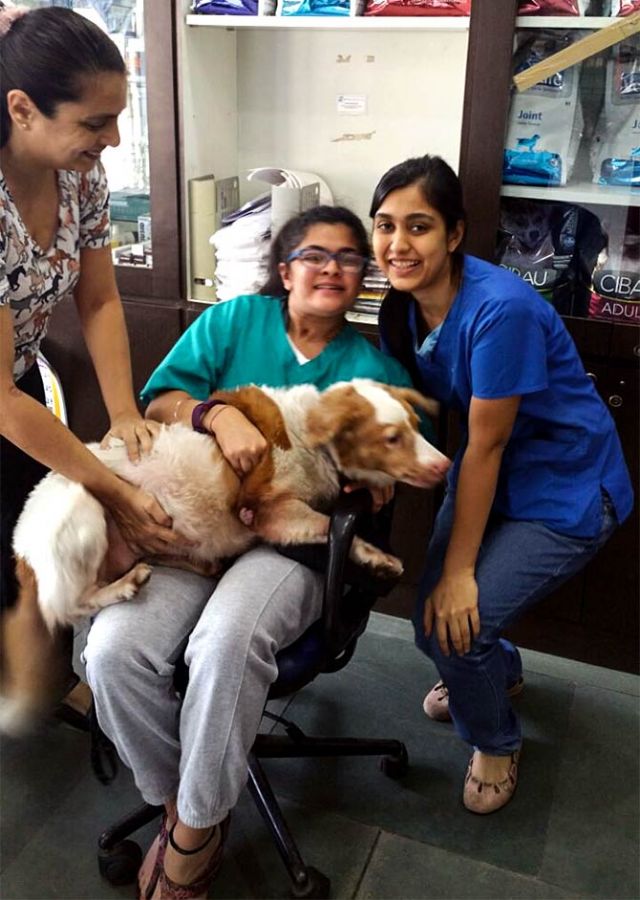 As dogs often are, Rayna's pets too have been a big help in her recovery.
She says, "I like looking after my dogs, playing with them and feeding them because they know how to cheer me up when I'm down."

Rayna had lost time and now she was one year behind her batch. Still she smiled (and ate a lot).

Some days, I might see her at lunch, no doubt gossiping. Other days, I'd see her painting as I passed the art studio.

But there was never a day when I wasn't inspired by her moxie and strength -- strength that today, I am unashamed to say, dwarfs any achievement of my own.

It took her one year to eat again without a tube.

More than a year to speak again.

During summer breaks, Rayna would spend months away at specialised therapy institutes.

Soon she was looking back at several other new milestones.

She made a successful foray into pottery.

She played the piano at the school's annual talent show.

She did an internship with a veterinarian.

And she sang with her friends at a concert at Blue Frog, one of Mumbai's most happening live music clubs then.

In October, Rayna finished three out of five National Institute of Open Schooling board exams.

Further, she also did a series of striking paintings, nine of which were shown at an art exhibition at the Cymroza Art Gallery in south Mumbai in October. The canvasses portrayed nine different musical instruments done in black and foiled gold against a backdrop of lovely, colourful clouds. 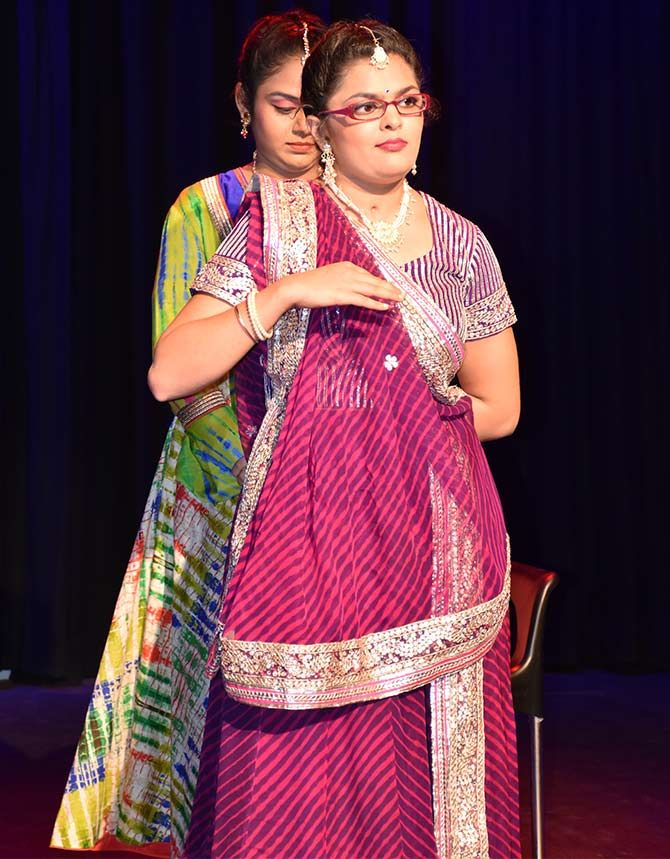 Many of Rayna's much-loved hobbies are, at the moment, unmanageable for her, but she remains positive that she will get back to them.

Rayna has had a special connection with music ever since her mother encouraged her to start going for piano lessons at the age of 4.

"Music is art in a way, and art is music in a way. They're both interlinked. Music is my passion; it's what I live for. I sort of bring everything I do in life to music," says Rayna.

It was the first thing she reacted to when she was in a coma.

"My teacher (Vera Choksey) started hitting a tambourine to the beat of Strauss, and I recognised the tune and reacted," Rayna remembers. "Beethoven and Mozart are my favourite musical artists because Mozart was a child prodigy. Beethoven composed even though he was deaf and that inspires me."

Each of the paintings were done using acrylic and gold foil, and retailed for a tidy sum. Rayna plans to donate most of the money. 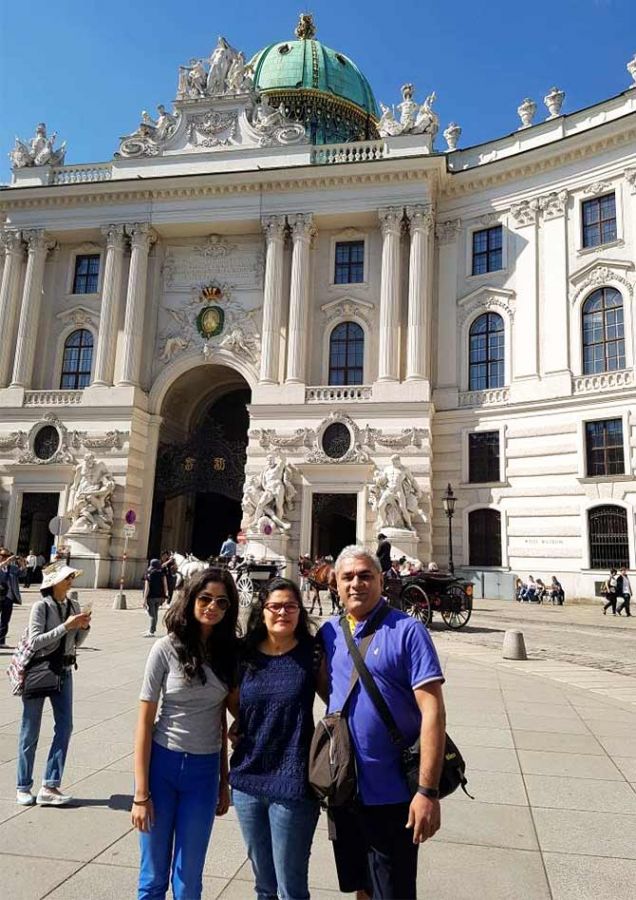 Rayna (centre) in Vienna. At the moment, she says, she is ready to go "wherever life leads me".

With the art exhibition under her belt, Rayna and I sat down to discuss how art has helped her recovery.

She says, "My art teacher, Miss Devanshi, taught me that acrylic paints give a three-D effect. Devanshi helped me outline and did the gold touch for the paintings…

"By teaching me art she has taught me to smile again. I haven't been able to smile the way I do in art class for a long time, because nothing except music and art touches me inside… The day music dies, I die also."

Art was a much later discovery for Rayna.

"A couple of months ago, I went to an art museum in Amsterdam and saw many paintings by Van Gogh. That's what inspired me to start painting to express myself…

"I would paint [earlier]… But not with love. It's different when you do something with love and dedication than when you do it offhand… Now, I put a special something, that can't be explained, or seen, or touched, into my paintings that many artists have. I just find that life is in colours.

"After the accident, I learnt to be more patient, so I noticed that life is like a set of paints. Each paint is different, in the sense that in life every situation is different…

"Before the accident, my art was happy and gay because I wanted to make happy art, but now I make art that truly expresses what I'm feeling… I didn't have much self-expression before the accident. It taught me to express myself through music and art."

In the future, Rayna dreams of pursuing art, music and literature -- three things that are emotionally soothing for her and help her to express herself.

But when I probe further about her plans for the future, Rayna only says: "Wherever life leads me." 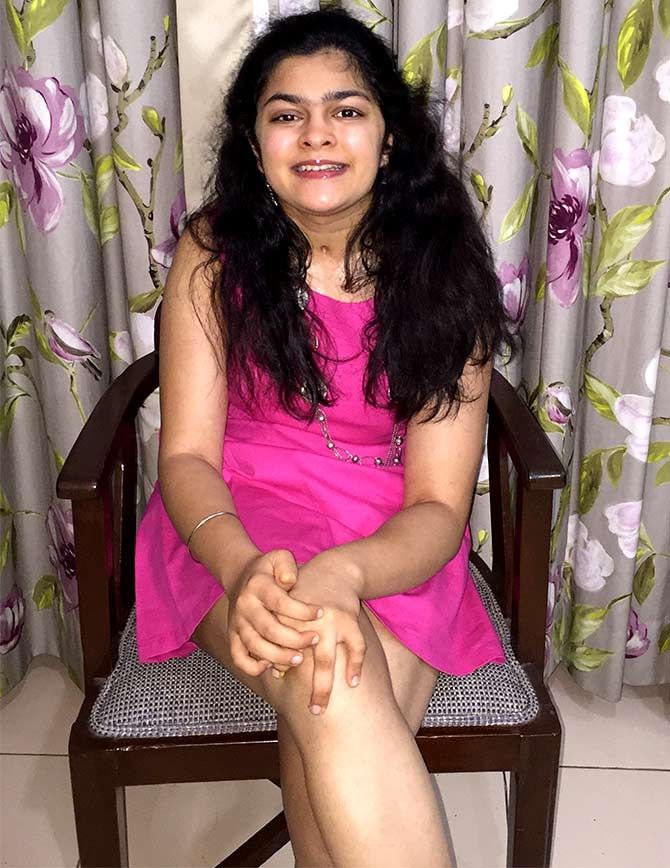 In the future, Rayna dreams of pursuing art, music and literature -- three things that are emotionally soothing for her and help her to express herself.

Though she makes it look easy, Rayna's journey hasn't at all been a breeze.

There were periods when she would struggle to find purpose.

It was hard to see her friends -- the same age as her -- doing things that she wanted to, but couldn't. It has been difficult not comparing herself with others.

"As a kid, I expected myself to be running marathons by 17. It kills you inside to know that you can't do something you expected yourself to do."

"After the accident, writing hasn't helped me express myself because all my work was sad."

In such times, Rayna turned to music: "Music has been more healing. Before the accident, music was just a passion, but after the accident it has helped me recover."

Many of Rayna's much-loved hobbies are, at the moment, unmanageable for her, but she remains positive, showing us that it is indeed possible to overcome severe trauma.

"I'm not capable of doing them. I mean I will at some point, much later. But at the moment it doesn't interest me. Like I love to dance, but I can't currently without support."

"I like looking after my dogs, playing with them and feeding them because they know how to cheer me up when I'm down."

On some nights, Rayna wonders why she was fated to lead the life she does, and she feels alone. After all, there's only a few of us out there who can truly understand her journey.

Rayna feels that there were certain things along the way that should have been more easily available to help her with her journey.

Rayna's metaphorical staircase has taken her up to a lofty floor of achievement that we can only dream of having the access code to. 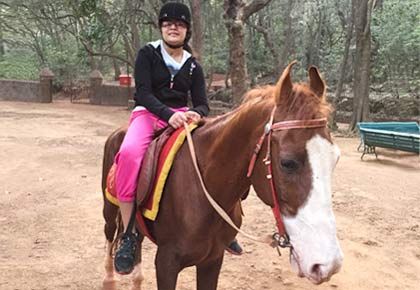 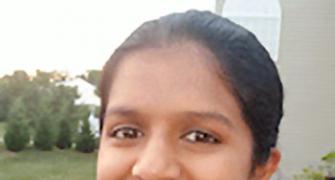 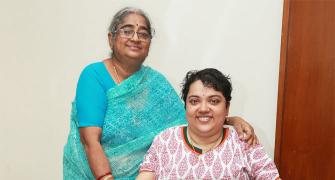 In a wheelchair, this spunky teen bats for others