'I asked myself: 'Why don't I become a changemaker and change the lives of underprivileged students?'' 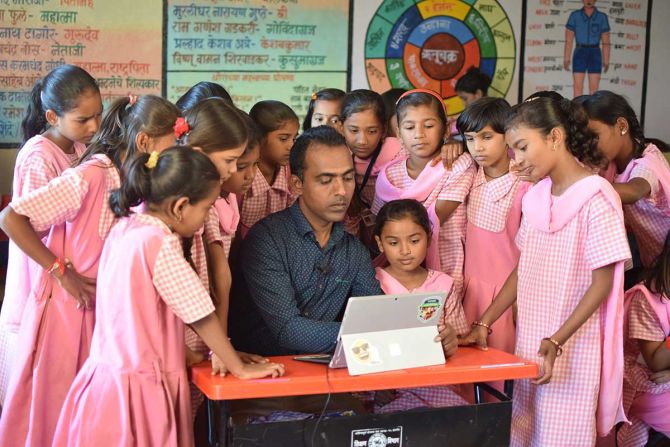 He was honoured as the Best Global Teacher earlier this year.

With that honour came $ 1 million.

It could have changed his life.

But Ranjitsinh Disale, a teacher at a state government-run district primary school in Paritewadi, a remote village in Maharashtra's south-western district of Solapur, is no typical human being.

Like he did earlier, he still travels 65 km every day -- and that's just one way -- on his two-wheeler to reach his school.

Disale made global news when he won the Global Teacher Prize 2020 for his exemplary work among girl students belonging to underprivileged sections of society at the Zilla Parishad Primary School where he works.

To understand how remote this village is from important administrative offices in the district, here are some statistics.

Paritewadi is about 48 km from the tehsil headquarters, Madha, a Parliamentary constituency represented by Sharad Pawar in 2009 and 2014. It is about 101 km away from the district headquarters, Solapur.

In a heart-to-heart conversation with Prasanna Zore/Rediff.com, Ranjit Disale talked about the challenges he had to overcome to bring about a change in the mindsets of his pupils' parents, how he made use of technology and entertainment to ensure 100 per cent attendance and later worked on the learning outcomes for which today this man from a remote Maharashtra village has become a global name.

"The challenges before me were multi-pronged -- like the parents's disinterest towards education, poor infrastructure (in the school) and the poor academic performance of the students. Their attendance was as low as two per cent and teenage marriages were very common in 2009," recalls Disale. 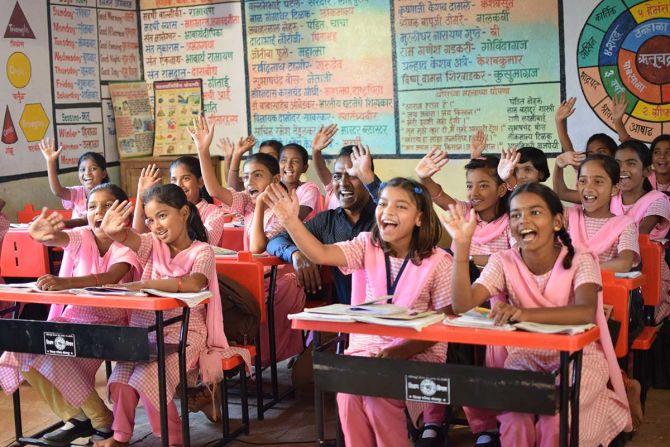 Did you expect that you would win the Global Teacher Prize?

When you are applying for the Global Teacher Prize, the last thought in your mind is about the money. But one of the questions asked in this contest is how you are going to use the prize money.

In my response, I had made it clear that I would be sharing my prize money (if I won).

I was expecting a Malaysian school teacher to win because he had that X factor -- he had done a great job; his work was actually recognised by his country and, when he was selected as one of the top 10 finalists, he got huge publicity in his country. I thought he might have an extra edge because of his popularity.

It was the biggest surprise (of my life) when (actor, writer) Stephen Fry announced my name. I couldn't believe it. I am thankful to God and I'm really proud that I am the first Indian teacher to win this award.

I think this award belongs to all the teachers in India; I am just their representative. This recognition and award will inspire teachers like me working in schools without financial or infrastructural backing to accomplish their goals.

How has your life changed after winning the Global Teacher Prize award?

My life hasn't changed at all. We are working the way we were working earlier. It's still a normal life.

How have your students and their parents reacted to your win?

It is very difficult for them to understand exactly what my work means to them and how their lives will change.

We are still living the way we were living earlier.

Of course, everybody in the villages where my students come from did celebrate my winning the award.

Could you describe your school for our readers?

Currently, it's like a global classroom where I teach 27 students.

But when I joined in 2009, my classroom was used as a cattle shed where cows and buffaloes stayed.

The students here are mostly from below the poverty level. Some of our students belong to tribal communities.

The languages of communication include Marathi and Kannada; it is a typical Indian classroom in a village. 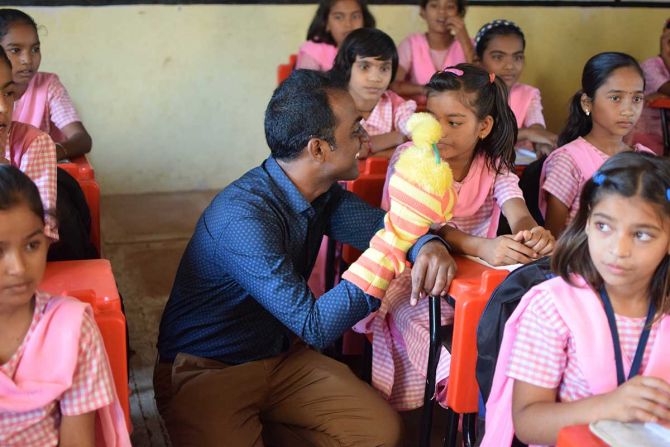 How did you adapt to these challenges and to the language barrier?

The challenges before me were multi-pronged -- like the parents's disinterest towards education, poor infrastructure (in the school) and the poor academic performance of the students. Their attendance was as low as two per cent and teenage marriages were very common in 2009.

I surveyed the entire village and collected data like the students's economic status, their cultural background and educational status. Based on the data I collected, I made a five-year plan of action and set targets for myself.

These targets included changing the attitude of the parents towards a girl child's education, creating awareness among them about the importance of knowledge and education, making sure that the girls in the school had a hundred per cent attendance and achieving expected learning outcomes in the respective classrooms.

To achieve these targets, I started projects like community engagement programmes. For some years, I shifted from where I lived to Paritewadi. I started to engage and interact with the parents and participated in their cultural and family programmes. It helped me understand their mindset and the way they look at education.

I started explaining to them how education can change their lives and the lives of their children.

I invited educated girls from cities and they spoke about the change education brought in their lives. These girls became role models for my students and their parents.

I also began a fun exercise called 'Alarm On, TV Off'.

As the parents were uneducated, they did not know what to do. I started sending them text messages in their mother tongue in the afternoon about what they were supposed to do that day with their children.

This prepared them and they planned their work accordingly.

While this helped create some awareness among the parents, students also started to take ownership of their learning.

Gradually, as parents became more conscious and aware of how education can change lives of their children, they started to send their children to school regularly and the students's attendance improved tremendously.

Now that the students had started coming in, I knew that traditional methods of teaching would not help. There was a huge gap in their learning styles and everyone was learning at their own pace.

My answer to this problem was technology -- I knew technology would help me in bridge the gap between their learning abilities and the learning outcomes I wanted to achieve.

I started using a laptop and set up a projector in school, which allowed me to teach my students using videos as a medium to impart education.

We were watching movies and singing songs in the classrooms, which now became a fun place.

Students were coming for entertainment. We would watch movies and later discuss what we watched and what we learned. When they went home, they would discuss it with their parents.

The children who were not coming to school realised that school had become a fun place where they could enjoy themselves.

This is how I could manage to get more students in the classroom. Gradually, our enrolment and attendance increased.

Now, I had to turn entertainment into edutainment. Once again, technology helped me a lot.

I used visual learning techniques with my students. I created videos, audio format for poems, recorded my own lectures, etc.

I shared all this data with them so that they could watch it whenever they wanted.

Did you face any financial challenges while doing this? All this technology you were using must have cost a lot.

Yes, I did face financial problems, but I raised funds with help from the Rotary Club.

We have 110 students in our school and I am teaching 27 students in grades three and four in my classroom.

It's a government school so we don't need any funds to run the school.

We need funds for initiating projects and to set up infrastructure.

For example, I want to buy laptops.

I wanted to have electricity in my classroom for which the government has very limited funds.

It was not possible to pay the electricity bill so I requested help from the branch manager of the State Bank of India. Using their CSR fund, he gave us solar kits. 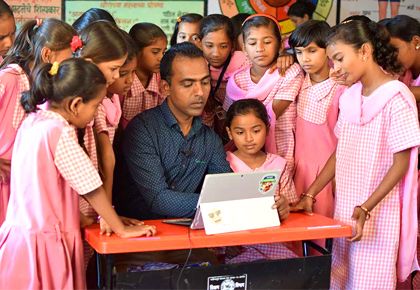 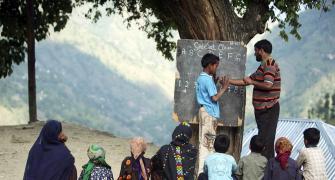 Teacher's Day: 'Even after 40 years I remember him!' 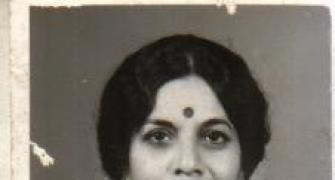 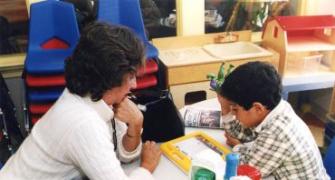 Teacher's Day: 'I'd be lost without you' 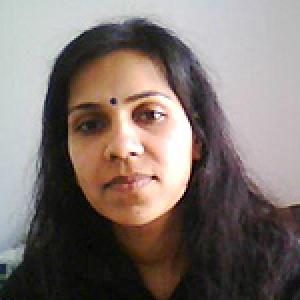 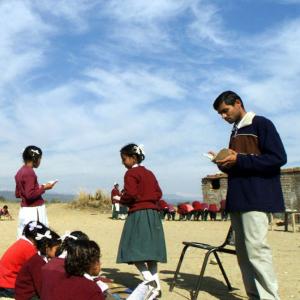 Teacher's Day: 'He gave us wings'