The Kambli family has been crafting the idol for Mumbai's most famous Ganesha pandal, Lalbaugcha Raja, since 1935.

The late Madhusudan D Kambli was first commissioned to sculpt the Lalbaugcha Raja idol in 1935.

As the years passed, his sons and grandsons have taken over the responsibility.

Over the years, the family ensured that a few things remained constant: The bhav (expression) in Bappa's eyes, the face and how the idol's body resembles a human figure.

"It's a slim Ganpati," points out 77-year-old Ratnakar Madhusudan Kambli who has been making the idol since 2002. 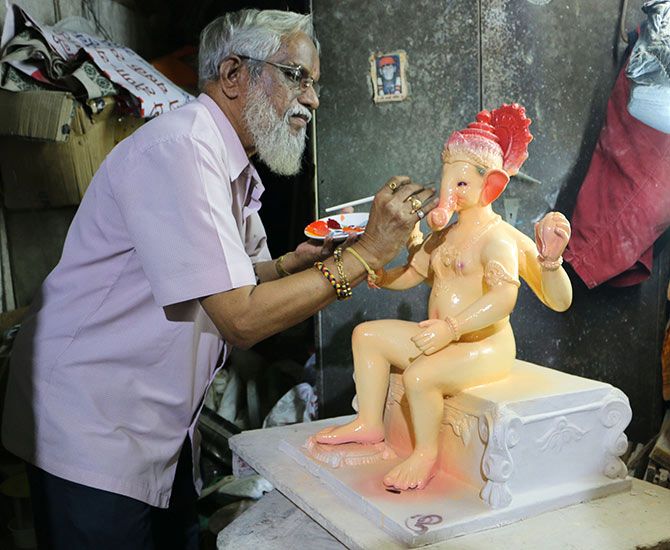 IMAGE: Ratnakar Kambli paints the idol which made its way to Shilpa Shetty's home. In 2016 too, the actress's Ganpati was created at Kambli's studio.

In 1952, when Ratnakar's father passed away, his older brother and he took charge of the business. "I was really young," he recalls.

Ratnakar makes idols for many celebrities. "We make Shilpa Shetty's Ganpati here. It's made out of clay and is very heavy. A small push can cause it to crack. Then the whole idol needs to be redone. That's painstaking."

"Most of the idols here are constantly being moved around. With plaster of paris idols, even if there is a small dent, it can easily be repaired." 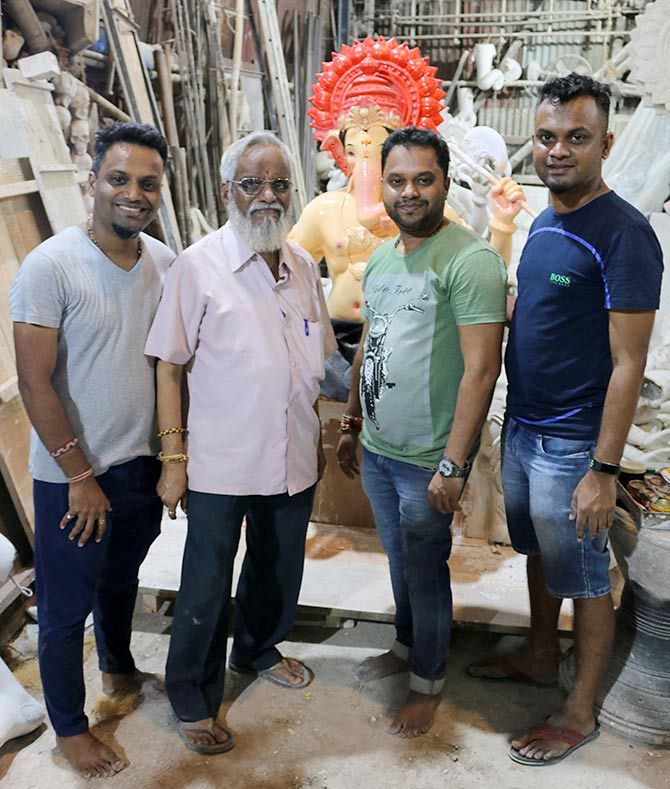 Since 1935, the family has been making the Lalbaugcha Raja's murti. "At that time the idol was just 5 feet tall," reveals Ratnakar.

"Over time, the space occupied by the mandal increased and the height of the idol increased as well. Today, the idol's height is fixed at 14 feet," he says.

"The decorations became elaborate too. Take a look at the idol this year, there is just a single murti. That's because when the idol is taken for visarjan (immersion), it becomes difficult to dismantle it."

Ask him what's special about Lalbaugcha Raja and he says, "The body looks very human. The face belongs to an elephant, but the hands and legs are just like us."

"We haven't given the murti a chubby figure nor is he pot-bellied. This is the look that we have been following since the time my father was making the idols," he adds.

"That was his style. It made us stand apart from the rest." 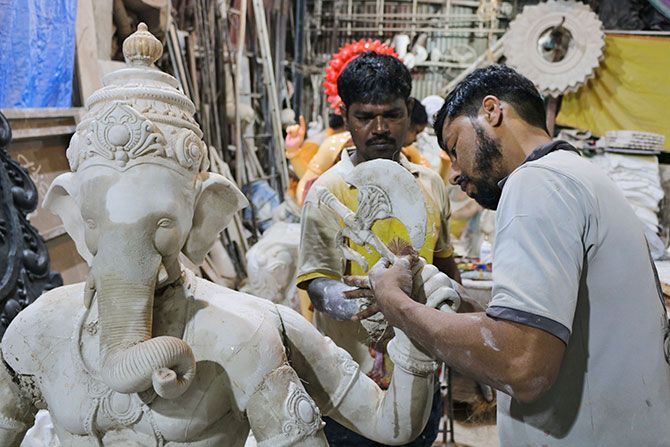 IMAGE: Artisans put together a Ganesha idol at Kambli's workshop.

"Before the preparations would begin, we'd have to create different colours. Each colour had to be made separately. That was my job," he adds with a smile. "The only issue was that it was time-consuming."

The Kamblis have got a copyright for the face of Lalbaugcha Raja.

"We have noticed that once we do something, it becomes a trend here. Then everyone wants to copy it," he says.

"That didn't work. The devotees wanted to touch both the feet. So now we make sure that the feet rest on a platform." 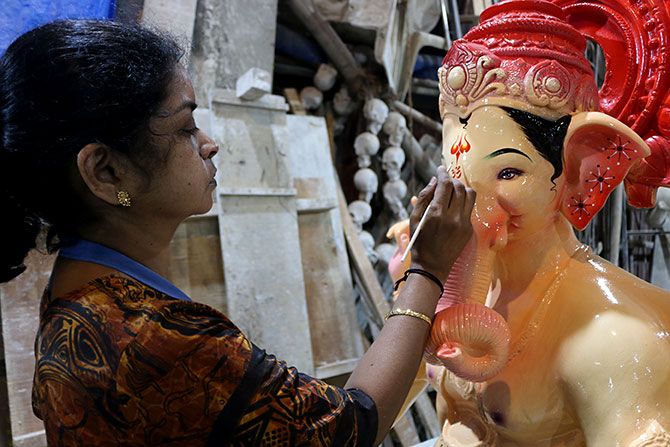 IMAGE: Getting the details right!

Ratnakar's entire family is involved in the Ganpati making process.

As we look around the workshop, he points to a young woman and says, "That's my niece. My nephew is also here."

"Most of my family members have graduated from Mumbai's Sir J J School of Art," he adds.

Santosh has not attended any art school. "I learnt on the job," says the marketing graduate whose mother is a drawing teacher. 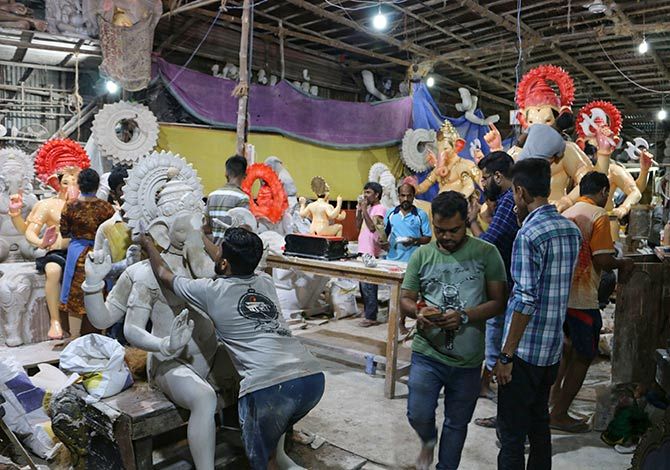 IMAGE: The artisans hurry to complete the idols.

"If you go to a big Ganesha pandal, there will be two idols -- a big murti and a small one. The pooja happens only with the small idol," says Santosh.

"But for Lalbaugcha Raja, there is only one murti," he explains. "That makes it so special."

"We have changed the throne of Lalbaugcha Raja over the years. Two years ago, it was inspired by an owl. Last year, we used a tortoise throne. If you visit Lalbaug market this year, you will see only tortoise thrones. Our work gets copied all the time," he says.

"A lot of research goes into deciding the throne. People are very sentimental about religious issues, so we need to be careful." 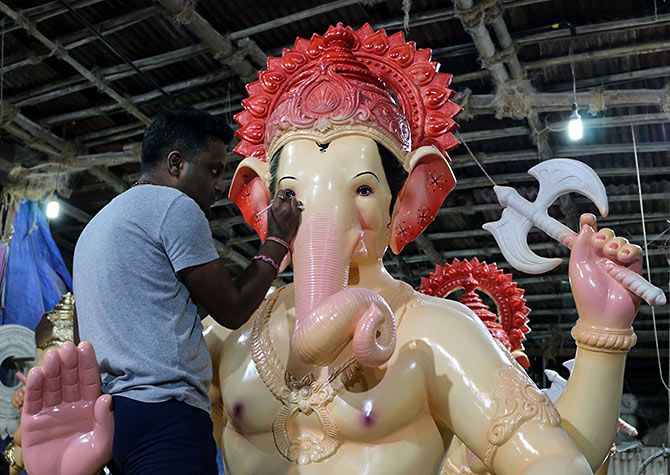 IMAGE: Sandhesh paints the eyes of an idol; this is considered the most difficult task.

When they are not making Ganesha idols, the Kamblis are busy with their sculpting work.

"There is a lot of demand for idols of Hindu gods abroad. Once we are done creating the Ganesha idols, we start off with the other work," says Ratnakar who hopes to now concentrate on the Ganpati celebration in the Kambli household.

What is it that keeps him glued to this job?

"It makes me happy knowing that I am keeping my father's craft alive. That's all I want." 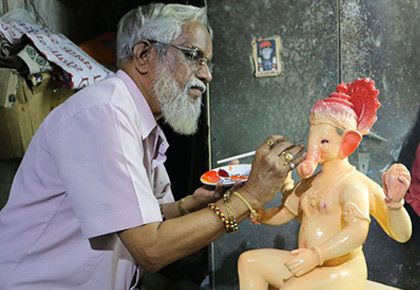 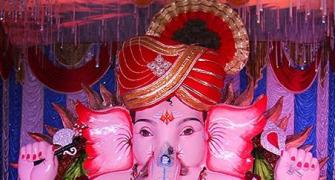 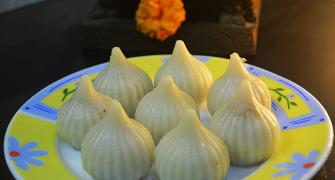 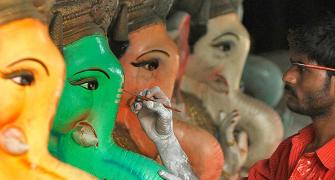 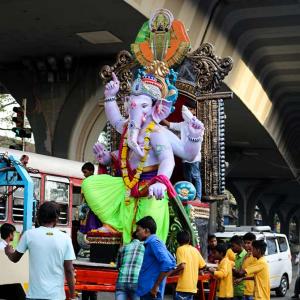 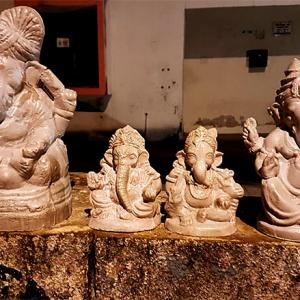