'The beautiful valleys dotted by standing trees, white rocks and gushing streams were an instant respite for our sleep-deprived eyes.'
Divya Nair on the final leg of her journey, driving from Leh towards Srinagar. 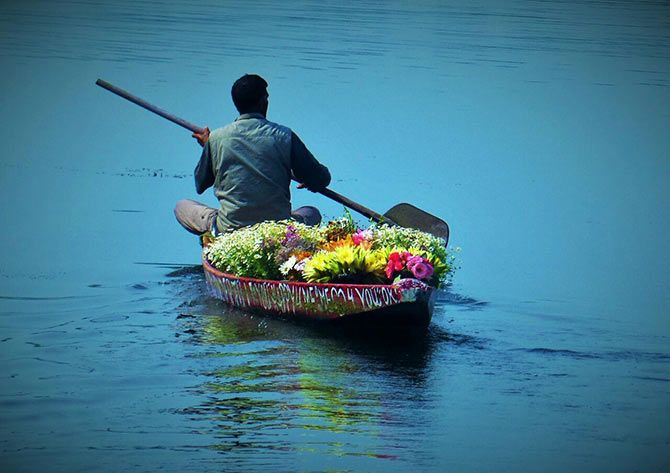 IMAGE: Nigeen Lake, a part of the Dal Lake, attracts tourists all round the year. Photograph: Kind courtesy Pawan Sharma

When the alarm rang, I was already up and ready. I hadn't slept at all.

Today, we would drive out of Leh towards Srinagar, to complete the final leg of our journey.

After feeling the heat in Leh (32 degrees), most of us had looked forward to rejuvenation in Srinagar, but Pranabda's unfortunate death cast a dark spell on the journey.

Although the expedition was considered cancelled, all of us had agreed to drive the vehicles up to Srinagar where we were to stay on a houseboat for two nights. Before we hit the road at 6 am from Leh towards Srinagar via NH1, we hugged Shomakda and prayed for Pranabda and his family.

Since we were heading towards Kargil, we were told to maintain radio silence and use the radio sparingly. We barely spoke to each other. It was an awkward journey.

We stopped for breakfast at a point near Lamayuru (11,500 feet), considered one of the oldest monasteries in Ladakh. IMAGE: The rock formations in Moonland makes you feel you are on another planet. Photograph: Kind courtesy Pawan Sharma

Further ahead, we crossed Moonland. The yellow rock formation and rounded mud cliffs made us believe that we were on a different planet. Maybe that's why the name Moonland.

It was past 10 am when we entered Kargil.

Along the way, children grabbed our breakfast boxes before we could give it to them. Some of us gave them biscuits and chocolates too.

The beautiful valleys dotted by standing trees, white rocks and gushing streams were an instant respite for our sleep-deprived eyes.

For most part of the drive, I kept my window rolled down so I could enjoy pristine nature. The snow had mostly melted and what remained was either black or grey.

There were horses, sheep and cows grazing on the green and yellow plains.

Every few metres there were men in uniform armed with weapons. It took me some time to get used to this sight. At 11 am, we arrived at the first and important stop of the day -- the Kargil War Memorial.

Please click here to watch a video from the Kargil War Memorial: On our way I was busy looking out of the window, clicking pictures of the valley, when I screamed.

We were crossing Zoji La and the inroads are so small and curved that I thought we almost slipped.

I wasn't the only one who screamed, others had similar feelings while crossing the pass. Zoji La is one of the riskiest roads linking Leh to Srinagar. IMAGE: There are bulldozers every few kilometres to rescue vehicles that get stuck. Photograph: Divya Nair/Rediff.com

From a distance, the inroads appear like someone has run their fingertips along the mountains and it has made a path.

There were bright coloured tents in the valley below, which Vikrum said belonged to pilgrims travelling to the Amarnath shrine. IMAGE: The journey between Leh and Srinagar is thrilling. Photograph: Divya Nair/Rediff.com

Please check the video for a glimpse of the Zoji La pass:

The journey would soon end, and we were told to enjoy the last few hours of the drive.

To avoid traffic, we drove through small villages and roads with fields and houses on either side. 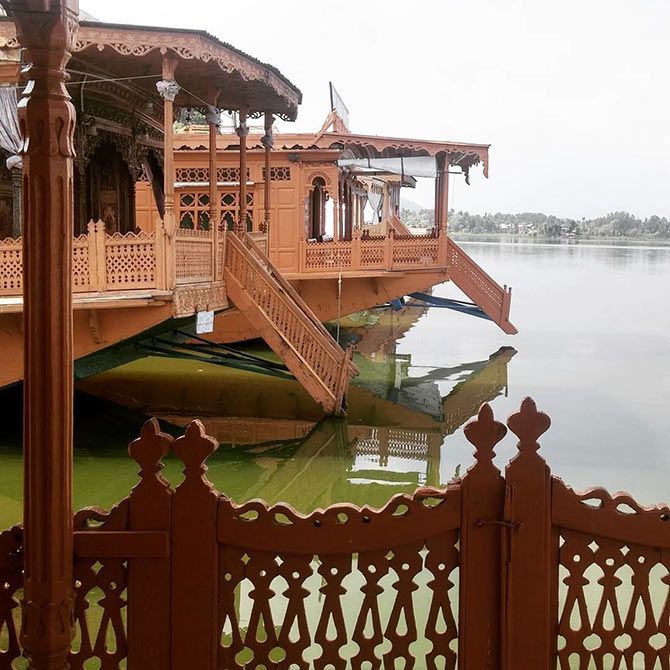 It was dark by the time I reached the Flora houseboat. There were two rooms on the houseboat, one of which would be shared by Sujal, Vitan and Neel.

Basheerbhai, the houseboat owner, took us around and gave us a list of dos and don't. No candles, no spilling water in the bathroom, he emphasised. Some years ago, a single candle had brought down an entire line of houseboats within minutes, he recalled.

Our houseboat was more than 20 years old and it cost lakhs of rupees to keep it in good shape, he added.

The temperature outside was 30 degrees and my room felt like a mini sauna with just a fan that moved at a slow pace.

As soon as I entered my room, there was lightning and kaput, the power went off.

Before I could panic, Neel stepped in and we managed to come to the front gate.

I called out to Gitu and Jijo who were on the adjacent houseboat. When I saw them (rather their shadows and voice), my face instantly lit up.

It's weird how strangers with nothing in common with me (except that we worked in the same profession), had become friends who I could turn to for help and advice.

From sharing medicines to keeping each other in good spirits throughout the expedition, we'd developed a bond that only a trip like this could have achieved.

It was Eid, so my plans for shopping in Srinagar were nixed. Basheerbhai said the markets would be shut for the next three days. 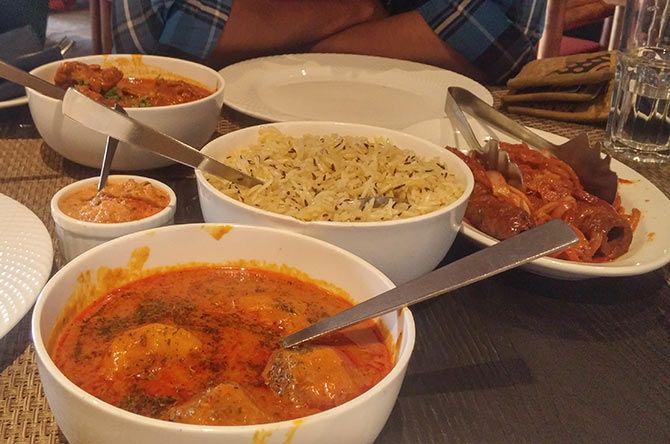 For lunch, we drove to Ahdoos, Srinagar's best-known restaurant. While I was disappointed that Ahdoos didn't serve a vegetarian version of Kashmiri Pulao, the Kashmiri Naan was soft and garnished with berries, nuts and raisins. In the evening, we took a shikhara ride. 'Gar firdaus, barooye zameen ast... haminasto, haminasto,' the shikharawallah told us, quoting Amir Khushro. 'If there is a heaven on Earth, it is here, it is here.' We couldn't have agreed more. 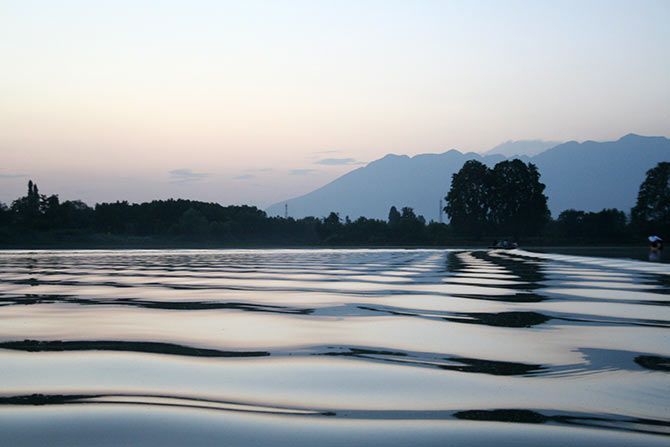 Suddenly, there was a huge wave underneath the shikhara and we held on to whatever we could for dear life.

It was a 'paani ka ghoda,' we were told, the local term for a high wave.

Each time a speedboat crosses the lake, it would send high waves, causing shikharawallahs to navigate carefully to avoid the bumpy waves. IMAGE: An evening ride on the lake will soothe your senses. Photograph: Divya Nair/Rediff.com

We watched the sun quietly dip into the mountains as we became shadows of the night. Slowly, the houseboats lit up one by one and the moon shone in competition.

I skipped dinner and packed my bags as I would be flying out early morning. As it was a holiday, I booked a cab to the airport for three times the price. The driver who came to drop me to the airport spoke impeccable English with an American accent.

Srinagar airport: A nightmare in waiting 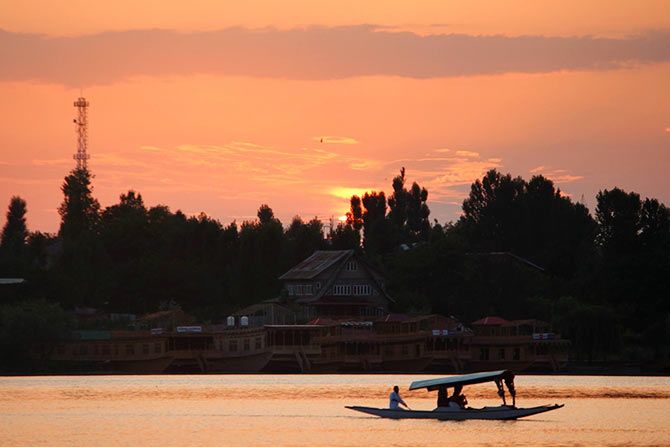 IMAGE: The setting sun was a reminder that the expedition was coming to an end. Photograph: Kind courtesy Sujal Modi

I reached the airport in 30 minutes, and I was warned about the tedious security checks. But I wasn't prepared for a nightmare.

Nearly half a kilometre before you enter the airport gate, your bags and vehicles are screened. I reached the airport two-and-a-half hours early, but it seemed I miscalculated.

It took me an hour-and-a-half to reach the GoAir desk to drop my bags. There were people waiting behind me whose flight was 10 minutes later, but they weren't allowed to come forward.

Despite the long queue, one counter shut which added to the chaos.

The ground floor stank from the stench of toilets. After the security check, the bags were searched manually and scanned.

Further ahead, there was a desk where women emptied handbags and bagpacks. Every tissue, keys and electronic accessory was carefully scrutinised.

One lady was carrying a packet of prasad; she was asked to taste it before it was approved and stamped.

The security process, be warned, takes 20 minutes or more.

After the security check, before you head to the waiting area, you have to identify your luggage against your ticket. Only then is it loaded on the aircraft.

While the impeccable security check is laudable, I noticed that passengers' names were called out at the last minute. One of them complained that they'd missed their flight because of the tediously long security check.

Despite coming in early, I got into the aircraft just five minutes prior to take off.

As I browsed the pictures and videos I had shot on my phone, a smile lit up my face.

Fourteen days ago, I had set on an unexpected journey with a bunch of strangers.

I had fallen in love with the Himalayas at first sight and the relationship had grown every single day after. There were the highs and lows, of course.

It was a journey to remember, something I could retell for years together.

Before I wind up, a poem by Roma Dhamija that pretty much sums up our journey:

Together came a group of strangers, for reciting our own rendition
Of building the convoy for the much awaited MME 2016 expedition
Bonding between the participants grew stronger by the day
This made worthwhile, the entire stay

Lengthy drives, rough terrain, still our spirits were high
The convoy kept on rolling and bunching without a sigh
The picturesque scenery still beholds in our eyes
Just the mesmerising beauty and us, with no pries

Radio in our vehicles and all the informative conversation
Played an imperative role in bridging the federation
Bonfire and dancing, it was all so refreshing
In times of distress, soothing was the co-participants' caressing

Good roads, bad roads and no roads at all
After the tiring journey, destination ensured the enthrall
In the stressful moments, the group held tight
The bonding of the group became its might

Some moments of panic, endless of joy
We always felt safe with the convoy
A journey to remember, memories to cherish
The bonding between the participants of MME 2016 will never perish

The moments of parting was the most difficult
Promise of meeting everyone again converted the cult
With all the adventure in the trip, wish we could go back in time
Till we meet again, the pleasant voices of the convoy will ring in our ears like a chime