Anthony Bourdain thought vada-pao was so good that all other Indian food could be dismissed. He was not wrong, says Aakar Patel. 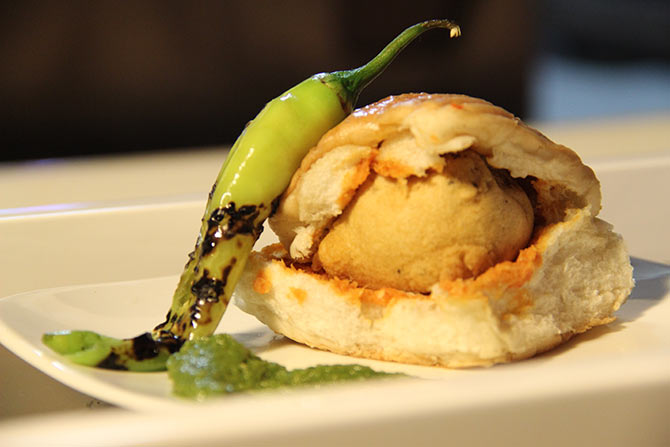 The chef and writer and television personality Anthony Bourdain once visited Mumbai and tasted a vada-pao on the street.

The camera caught his response, and he said the words, after a couple of bites, if I remember them right, 'In all humility, this is probably the best Indian food I have eaten.'

I am not sure what he meant by the qualifying phrase 'in all humility'. Did he mean that he was being humble before sending down judgement on such a grand subject as Indian food?

Or was he dismissing all the other Indian food he had experienced, but was saying this with humility?

We will, of course, never know because Bourdain took his life in June and it will remain a mystery. It will be interesting to know what Indians think of what he said about this particular snack.

Bourdain was, as many readers will know, really knowledgeable and open-minded about the things he put into his mouth. And he also was, as those who have watched his television shows know, quite familiar with India and Indian food.

So this was not your random tourist, fresh off the boat, who was offering opinion on the first thing he had consumed in a foreign land.

This was the judgement of an expert, who was also alerting us to the fact that he is aware ('in all humility') that what he was saying was unexpected and possibly alarming.

So is vada-pao the best that Indian food has to offer?

I don't think anyone will agree, because in the first place we take street food, and particularly snack food, quite lightly. It is not real food, in the sense that it is incidental and has no real place in cuisine.

It would horrify the Bengali that his hallowed ilish shorshe bata was being compared to such an abomination as a vada-pao. And lest I be accused of caricature, I should extend that to other communities.

My mother (who makes an excellent batata vada, the thing that is at the heart of the vada-pao) would be astonished that it would be compared to something like undhiyu, the Surati equivalent of ilish shorshe bata.

The Kashmiri and the Tamilian will similarly have strong opinion about some special thing in their cultures.

We will not even bring up the high culture cuisines of India like Mughlai and Awadhi and so on because they would not have a serious discussion on vada-pao.

Even some of the other snack and street food that we have would be seen as superior to the vada-pao.

For example, to bring in Bengalis again, the kathi roll. This is a creation that has two elements, a fried paratha and a kebab, that would be seen as being much more advanced than the things that go into the vada-pao.

I do not agree with that opinion, because I find the roll too heavy, too oily and with too many variables (the kind of meat, who cooks it and so on).

There is also, of course, variance in the vada-pao, but not as exaggerated. A competent vada-pao maker will do the job and one does not need greatness.

When I first came to Bombay, as it was then called, I had not much money.

My salary as a reporter was Rs 1,700, which in 1995 was not an insubstantial sum, but still not enough to eat out regularly.

My beat was the sessions court, next to Bombay University, and outside it was a vada-pao seller whose wares were available for Rs 2 each. Meaning for Rs 4, you could have a filling and fine lunch and I often did.

And there are many even today who would have a similar experience and they needn't even be as close to penury as I was.

My former boss Tariq Ansari, whose family used to own the newspaper Mid Day, was a big vada-pao consumer. Tariq is a man of great refinement and, therefore, preferred this food to the other things that he could get in the Central Mumbai area where his office was.

He would regularly bring two of them, wrapped in newspaper and in the boot of his car (presumably to keep the odour out). At lunch time, he would pop the boot open and eat them, out of the paper, standing next to the car in the parking lot.

The city of Mumbai is strongly associated with the vada-pao for three reasons.

First that the Portuguese had a presence there and introduced to the city the pao (my friend Rajesh Tahil, who lives in Bandra, says he did not know of the existence of sliced bread till he went to school).

Second, that it is a city with a large population of people from the working class who are looking for quick and cheap nutrition.

And third that it provided employment to a large section of Marathi youth.

My former colleague Deepak Lokhande once reported on the origins of the vada-pao. It was more or less invented by an individual named Ashok Vaidya in the Dadar neighbourhood some 60 or so years ago. That makes it very recent as a dish.

The fact that it has become as popular as it has in such a short period speaks to its quality because food is not something that is taken up quickly by a culture.

Having eaten in different cultures over the decades, I now find Indian food overly spiced (meaning too much masala, not too much hotness, which is often welcome).

The intensity and the volume of spice pretty much kills any underlying flavour that the primary ingredient, whether meat or vegetable, might have. This is something that the vada-pao avoids.

It is spiced, of course, but only just. Its flavour comes equally from the aromatics that go into it (ginger and curry leaves), the hot and sweet chutney, the garlic and chili powder and the primary ingredients of bread and potato.

I think, going back to the beginning, that what Bourdain meant was that his opinion would shock us. He thought vada-pao was so good that all other Indian food could be dismissed. In my opinion he was not wrong.

Such things are subjective, of course, but it is not easy to argue against the view that vada-pao is the best food that India has to offer. 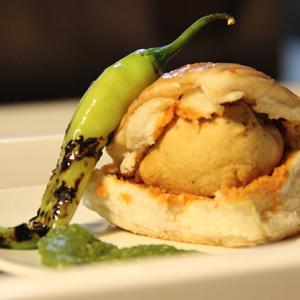