News
Business
Movies
Sports
Cricket
Get Ahead
Money Tips
Shopping
Sign in  |  Create a Rediffmail account
Rediff.com  » Getahead » Will the 'Force' be with this Moto X?

The Moto X Force carries a brilliant screen, pretty good camera, and the battery woes have been taken care of as well. The shatterproof screen is definitely a great plus, but the missing OIS, stereo speakers and the absent finger print scanner, all these are glaring omissions, says Himanshu Juneja. 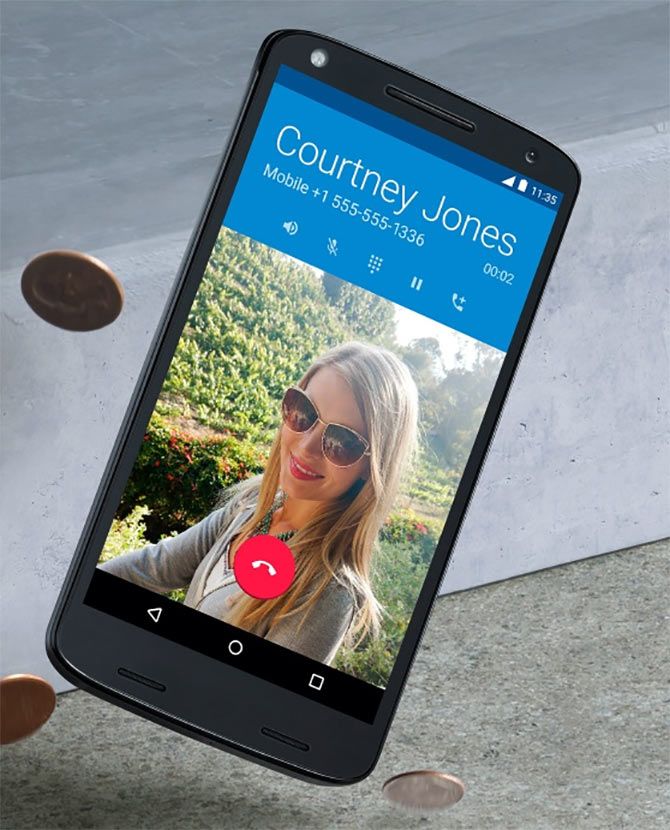 Motorola has been bringing out models which have suited the tastes across different price brackets. A combination of good hardware with near stock OS has enabled Motorola to consolidate its position firmly in the Indian market.

The company has now introduced Moto X Force, a premium model. The USP for this phone being its 'shatter proof' screen. As lip smacking as the feature sounds, a price of Rs 50,000 means it costs a bomb as well.

Are there any other aces up the Moto X Force's sleeves as well? Let us find out.

The phone gives an unmistakably chunky feel. The phone carries dimensions of 149.8 x 78 x 9.2 mm, and weighs a robust 169 gms. The bezels are the culprit for the girth, but the slimness along with curved back panel allow to establish a decent grip.

Speaking of gripping the phone, the phone's rear has been imparted with a ballistic nylon finish, and its mesh-like structure aids in gripping.
Otherwise, the frame is made up of metal, and the overall look is very utilitarian.

As for the button placements, the right edge sports the power and the volume keys, while the top edge carries the 3.5 mm jack as well as the trays for the SIM and microSD. The bottom edge plays host to the microUSB port.

The missing type C port and the finger print scanner really disappointed, as the Moto X Force is asking for a premium price for itself. Also, there is no stereo speaker system either. 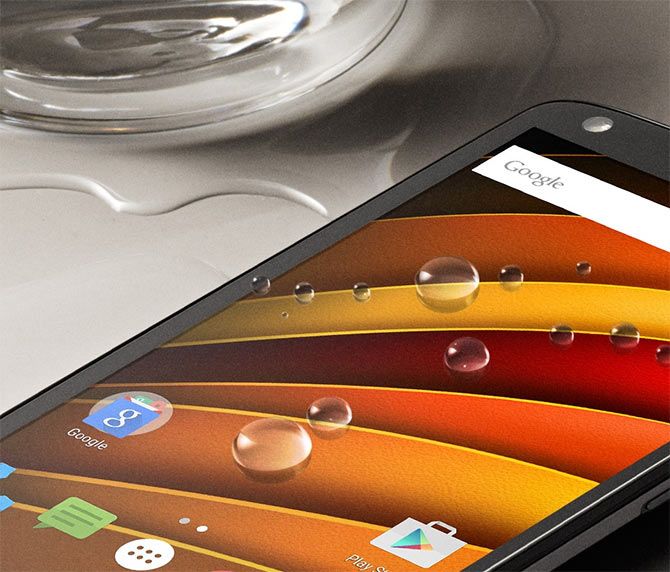 Before we get to the shatterproof hullabaloo, the basics: The screen is an AMOLED variety and deserves praise. The 5.7-inch screen packs in a 1440 x 2560p resolution, and cranks out 540 ppi worth of pixel density which ensures crisp text and dense display otherwise.

The colours are vibrant, but not in the same class as Samsung's.

As for the shatterproof technology, Motorola has gone in for a five layered structure. First up is a Shattershield lens, which is sort of a screen protector and can be manually replaced if the need arises. This layer is distinctively visible and poses a hindrance in attaining the best levels the display screen can manage.

The next layer is an interior lens, followed by a dual touch layer. The set up has AMOLED display screen as next, and lastly one encounters the aluminium chassis.

Motorola is utterly sure of the screen's rigidity, and is offering free replacement within the first four years of usage. The confidence is not misplaced either, as despite taking a number of tumbles, and even though the rest of the phone proving to be still prone to damages, the display came out absolutely unharmed.

The brightness levels of the screen ensures reading under direct sunlight is not an issue. The contrast ratio came out to be fantastic as well. Motorola has done a good job on the display here.

It was imperative that Motorola supplied ample hardware prowess, unless it was asking for brickbats owing to the high price involved.

There is Adreno 430 for handling the graphics, while 3 GB of RAM provides good support. The onboard memory can be chosen from either 32 GB or 64 GB storage capacities.

Users also get the advantage of going with a memory card option of (up to) another 2 TB.

A single SIM device, the Moto X Force is 4G enabled, and comes with plethora of connectivity options like Wi-Fi 802.11 a/b/g/n/c, Bluetooth (ver 4.1), and NFC as well.

The users get to avail the GPS services with A-GPS and GLONASS being onboard.

The missing USB Type C connector again added to the disappointment. For a highly priced device, obvious steps for future proofing should be included as a given. 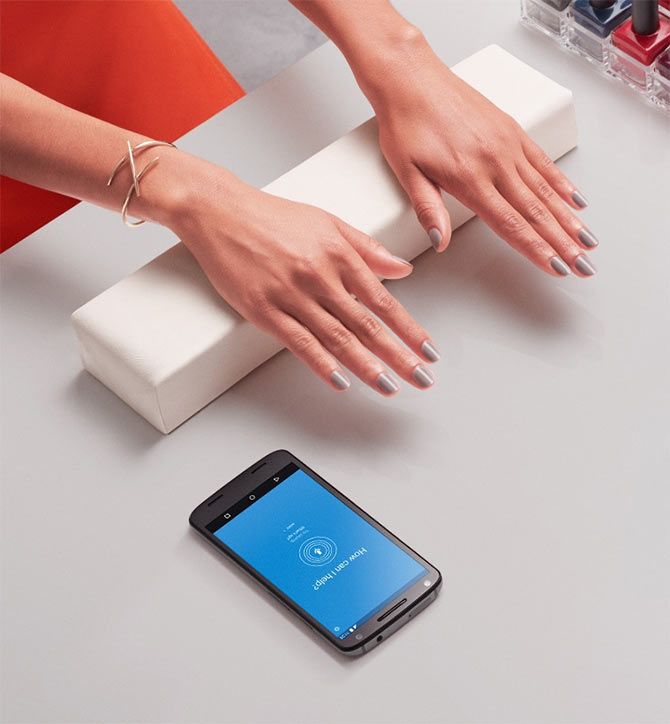 Motorola has built quite a reputation when it comes to the software aspect. Their penchant to keep the Android version close to stock has paid rich dividends, and same is the case with the Moto X Force.

The phone runs on Android Lollipop (5.1.1) out of the box, and the Marshmallow update is up for grabs already. Whatever tweaks Motorola has included, have only enhanced the stock OS experience. This includes the gesture controls, whereby twisting of the wrist will launch the camera app, or a double chop gesture will launch the torch app.

Users can also summon the voice assistant and order for searches, sending messages, launching apps, or even for placing calls. Hands free was never this easy.

Moto Display is one of the enviable addition which makes even the Nexus 6P owners go green with envy. The monochromatic notifications allows for subtle displays, and with AMOLED screen, the effect is even more prominent.

Moto Assist comes in incredibly handy while one is driving or fast asleep. The phone's notification system goes through changes according to these profiles, ensuring that the user is not disturbed.

Overall, the simplicity of the OS by Motorola has to be lauded. The lightweight interface also ensures zippy performance.

Given the solid configuration the phone comes with, it was only natural that the Moto X Force brought in the smooth performance when tested.

The phone works as per expectations, and there was no stuttering or jaggedness involved. The apps launched, switched and exited with aplomb. The HD gaming went about smoothly as well. The phone not getting too hot to handle was a further relief.

The stereo effect was sorely missed while dealing with HD media. For the price this phone comes with, this should not have been overlooked. 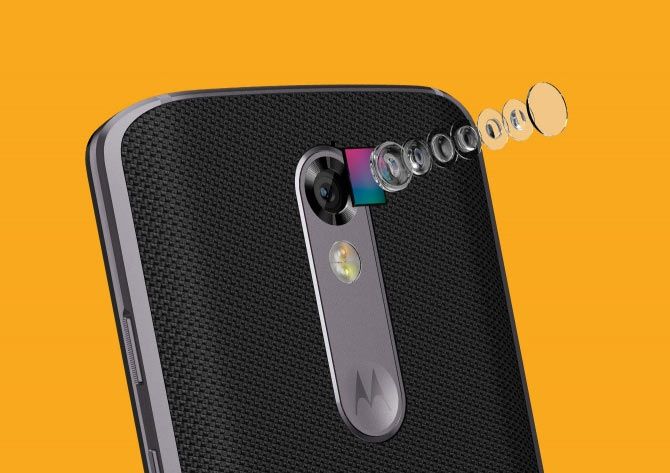 Moto X Force comes with a 21 megapixel shooter at the rear, along with its dual tone LED flash, whereas the front facing camera is a 5 megapixel affair, and has its own LED flash as well.

Not finding the Optical Image Stabilisation feature for a high price bracket device was disappointing. The results with the rear camera are pretty good, as the captured photographs came packed up with good details and impressive colour reproduction. HDR mode comes through with impressive results and makes up for some very good photographs for the album.

The exposure control feature comes to the rescue in an admirable fashion.

But the poorly lit conditions did pose a challenge for the camera as the results had noise visible, and the autofocus struggled to boot. The lack of OIS was painfully clear here. Despite this, the stable pics will be able to impress majority of the users and one can safely bet that the camera is a notch below Nexus 6P.

The videos came out good, but the 4k/UHD videos had issues with frames. Random stuttering was noticed and thankfully were not very frequent.

The front camera does a fine job and captures good quality selfies. The flash being present meant that even the selfies are brightly lit and turn out great even during post dusk shooting session.

The phone comes with a non-removable 3760 mAh battery, and with a heavy duty charger. The support for fast charge technology enables the phone to be juiced up from zero to completely charged within an hour. The phone also has support for wireless charging.

As for battery performance, the phone easily lasts for a day with a heavy duty usage pattern. Low to moderate usage ways will even witness the phone lasting for nearly two days!

After Moto X Style received criticism, the Moto X Force has surely been geared to put things back on track. Though, the fixed cable on the charger means the user will have to make a separate purchase if they feel like transferring data between the computer and the phone.

Motorola continues to bring out phones which have been able to strike the right cords with the customers. The Moto X Force is another offering but it comes at a steep price and lacks few of the features which a high end phone comes with as a given.

The Moto X Force carries a brilliant screen, pretty good camera, and the battery woes have been taken care of as well. The shatterproof screen is definitely a great plus, but the missing OIS, stereo speakers and the absent finger print scanner, all these are glaring omissions.

Motorola seems to be banking heavily on those who have discovered that display screens are a fragile thing, or regularly keep dropping the phones screen first. It is for these target customers to decide whether the assurance is worth shelling out Rs 50,000 or not.

As alternatives, phones like the Google Nexus 6P, Samsung Galaxy S6 variants, and even the LG G4 are lurking pretty close by. 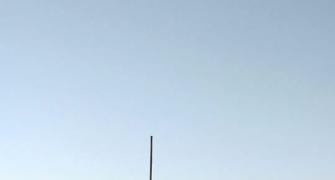 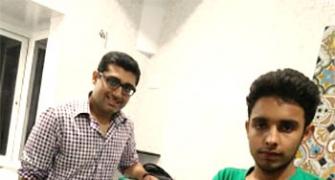 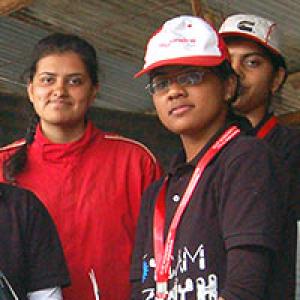 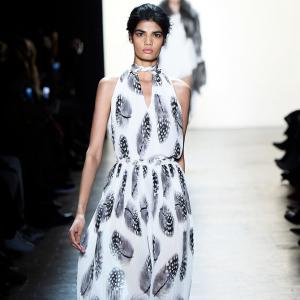