News
Business
Movies
Sports
Cricket
Get Ahead
Money Tips
Shopping
Sign in  |  Create a Rediffmail account
Rediff.com  » Getahead » Food » From Japan to Delhi, it's sushi all the way

From Japan to Delhi, it's sushi all the way

Chef Keisuke Uno at the Japanese restaurant Ai in Saket, Delhi, is smiling and struggling. His translator and Ai's manager is held up in traffic and Uno says, "I can't speak English." We try to plod along nonetheless, me not knowing a word of Japanese and Uno with the handful of English words in his arsenal.

This is how it goes:

Me: When did you start making sushi?

Uno: I started seven years ago in New York.

Me: You must find Delhi very noisy?

It's difficult to keep up an interview like this, and Uno excuses himself, saying that he will be back with his dictionary. He comes back with a slim, nifty-looking device, the size of a PlayStation. It looks as if our interaction is less likely to be lost in translation. But before the digital dictionary is brought fully into play, the manager arrives.

The interview now gets underway in earnest. What made him come to India? Uno replies with his ever-present smile, "I used to work in Singapore and I used to go to Little India to shop. There used to be a temple close by. I found it very beautiful and spiritual."

Two months ago, inspired by that, Uno landed in Delhi. Has he had any time to look around? "My first priority," shares Uno, "is to get a new menu at Ai in place. After that is done, I intend to learn either English or Hindi." Language hasn't really been a barrier, with Uno managing to get around the city in autos and communicate with those who work with him in the kitchen. "They understand my broken English," says Uno.

Language hasn't been a barrier for Uno when he considers staying long-term in India. He says, "I have liked it in India so far."

At home in Japan Uno's parents owned a soya sauce and sake brewery -- thus covering two major elements of Japanese food. That, according to Uno, laid the foundation for his interest in cooking. What cemented it was a cookery show on TV. After completing high school in Japan, Uno signed up to be a chef. After working initially as a Japanese chef in Japan, Uno shifted his interest to French food and earned his livelihood serving that cuisine.

Wanting to develop his skills, Uno then lived for a while in New York and Singapore. His reason for doing so had to do with the way the Japanese are when it comes to sharing feedback. "People in Japan never tell you if something is good or bad and how they would have liked it," says Uno. "I like guest feedback. Guest interaction outside has been motivating," he concludes.

Guest comments have played a key role in shaping the new menu at Ai. Uno and his team have taken the full list of over 30 dishes on the menu and pared it down to just 16 or so, after talking with clients who were specially invited to food tastings. 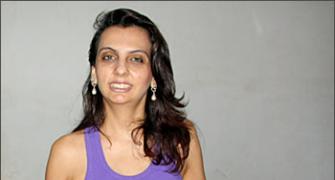