News
Business
Movies
Sports
Cricket
Get Ahead
Money Tips
Shopping
Sign in  |  Create a Rediffmail account
Rediff.com  » Getahead » The only Indian university in THE world rankings this year

In 2011, the Indian Institute of Science, Bengaluru featured on Number 92 in the top 100 Times Higher Education World Reputation Rankings.
Seven years later, it makes a comeback in the 91 to 100 band.

The Indian Institute of Science (IISc) Bengaluru has made it to the list of top 100 in the Times Higher Education (THE) World Reputation Rankings 2018. The last time it was featured was in 2011.

The annual ranking highlights the top 100 global university brands, which now includes IISc in the 91 to 100 band.

Commenting on the rankings, Phil Baty, editorial director of Global Rankings for THE, said, "Only 100 institutions in the world make it to this annual list of the most powerful university brands, so it is a highly significant achievement to be included -- and fantastic to see an Indian presence this year."

The list was compiled from a globally representative survey of more than 10,000 senior academics. IISc was the only Indian institute to have made it this year.

"That prestige -- that 'brand' -- is vital for any university in attracting the necessary talent to allow it to compete and thrive, as well as drawing in strategic partners, philanthropy and investment. As initiatives to improve and internationalise the nation's higher education system gain momentum, I hope to see a strengthened Indian presence in this table in future years," Baty said.

Overall, the US continues to dominate, with Harvard University taking the top spot for the eighth consecutive year, followed by Massachusetts Institute of Technology (MIT) and Stanford University at second and third place, along with 41 other US institutions, that made it to the top 100.

The top 20 comprised of 13 American universities, four from the UK, two from China and one from Japan.

Baty maintained the US had strengthened its position with more institutes moving up the rankings this year -- despite fears that the US was suffering a 'Trump slump' in terms of its global reputation.

Europe claimed 33 spots with nine from the UK, six from Germany, and five from the Netherlands.

"Particularly worrying is the decline of all London universities in this list. London is one of the world's most dynamic and international capital cities, and has traditionally been the leading city in the world for outstanding higher education and research -- drawing talent from across the globe. If this data turns out to be the beginning of a trend of decline, the damage could be significant."

In all, 21 countries were represented in the top 100 rankings. 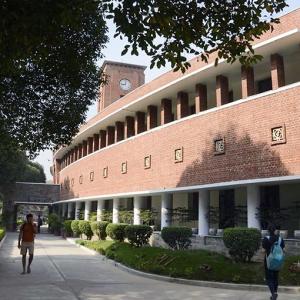