What is it that helped Arjuna clear his confusion on the battlefield?

How did Krishna convince Arjuna to slay his brothers and yet feel righteous?

Roopa Pai's The Gita: For Children is a marvellous book that retells the epic conversation between Lord Krishna and Arjuna, that will long stay with you after you have turned the last page. 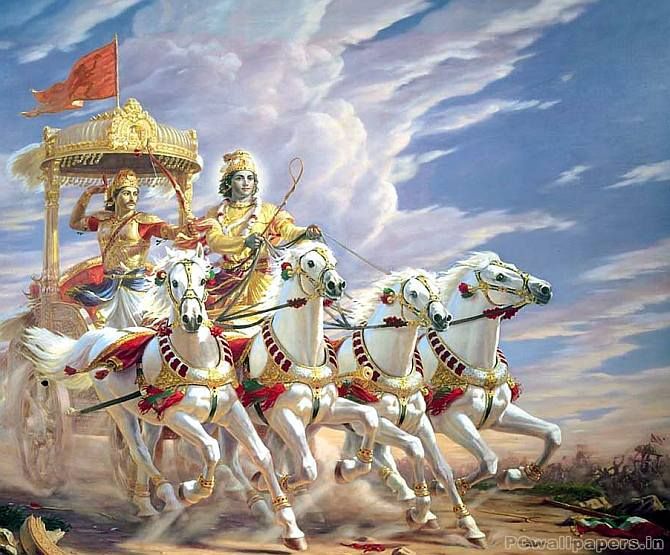 We carry an excerpt from the book...

The words were uttered quietly, but there was no mistaking the rebuke in Krishna's tone.

'Greatest archer in the world, he calls himself! Noblest of warriors, destroyer of foes, most single-minded of men! Ha!'

The hunched figure on the floor of the chariot refused to be provoked. Instead, Arjuna seemed to sink further into himself. 'Oh, come on! You knew all along what this war was about, whom you were going to fight. You've had enough time to debate the rightness and wrongness of it before the decision to fight was made. You cannot start thinking about it now, when you are already on the battlefield, when your side is depending on you to lead them to victory!'

Krishna waited, hoping for some kind of reaction.

'This is completely disgraceful behaviour for a warrior, and you know it. There is no honour in running away from battle, and dejection does not suit you.' Krishna's voice grew sterner. 'Enough of that snivelling, Arjuna. Stand up, pick up your bow, and fight a battle worthy of a Pandava prince!'

'Do stop, Krishna!' begged Arjuna. 'Do you even realize what you're asking of me? Slaughtering my brothers, murdering my teachers -- how can that be noble or right, in any universe?' Arjuna shook his head incredulously. 'Why, every holy scripture I have ever read roundly condemns such killing as the most terrible of sins. Every moment of my life beyond such a war will be stained with blood-guilt and utter despair. Don't you see how...?'

Arjuna stopped. His arguments had begun to sound weak and hollow, even to his own ears. For Arjuna came from a proud bloodline of fighting men, and both his natural warrior instincts and years of rigorous training had been waiting a lifetime to find expression in a war exactly like this one.

Every fibre of his being reaffirmed to him that it would only be the worst kind of coward who ran away from the battlefield, even though fleeing
seemed a very tempting proposition, even a noble one, at the moment. If he followed his impulse and ran, though, would he be able to live with himself?

But the alternative -- not running away, staying and fighting and killing the people most dear to him -- was equally terrible to contemplate. Lost in a fug of utter bewilderment, Arjuna did what he had always done over the years in such situations. He turned to his closest friend and his wisest mentor, the only one in the world he completely trusted, and placed the dilemma in his hands.

'I have no answers, Krishna. I cannot see my way forward. You have never let me down before, and I know you will not now. Help me, my friend. Tell me, straight up and without mincing your words, what I should do.'

There was a pause. Krishna waited, sensing he wasn't quite done yet.

A moment later, Arjuna lifted his chin defiantly, a touch of the old haughtiness back in the handsome face. 'Let me clarify one thing, Krishna, before you speak. You know I trust your judgment, but I will need to be fully convinced about your point of view.'

'Otherwise,' he locked eyes with Krishna, 'I will not fight.' Krishna smiled. 'Listen then, my dearest Arjuna...' 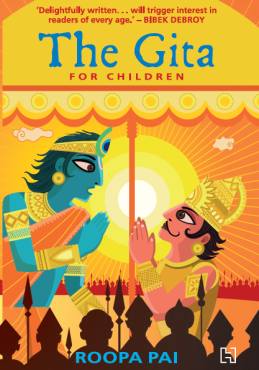 Lessons from the Gita:

1. It's not only okay to be confused, it's a darned good thing.

2. Now that you are confused, don't look outside for help, look inside. Krishna's smile is an important turning point in the conversation. Krishna is amused at Arjuna's attempts to find excuses for his sudden weakness on the battlefield, but pleased that he has finally stopped arguing, and accepted that he does not know what to do. There is no shame in admitting that you don't know what's right; in fact, it is the first step to figuring out what is.

So how do you figure what's right? Do you ask people around you, and listen to anyone who has an opinion and is willing to share it? Absolutely not, says the Gita. Instead, it exhorts you to be like Arjuna.

Arjuna knows that if he walks away from the battlefield, his opponents will snigger at him, calling him a coward who got cold feet at the sight of their mighty army. His brothers, wives and children, not to mention his teachers and elders, will be disappointed in him. The army he is
supposed to lead will be embarrassed by his desertion and furious at his betrayal, and history will label him a traitor. If he stays and fights, however, everyone will call him a hero and sing his praises, and generations of men to follow will revere him as a great warrior. Given these two
options, most people would have picked the second one without a moment's thought.

The fact that Arjuna didn't is what makes him worthy. It wasn't what other people thought that mattered to him, it was what he himself felt, in his own heart. But his heart was completely at war with itself! That's when Arjuna made his second good decision. He didn't simply close out one bad option and choose the other, saying, 'I'll think about the wisdom of it all later, once the war is done.' Instead, he decided to resolve his inner conflict right then and there, never mind how long it took or how inconvenient it would make things for him and, possibly, everyone else.

He simply put his bow down and turned to Krishna for advice.

And so can you.

Who is Krishna, anyway? And where can you find him? In the Gita, which is the holy book of the Hindus, Krishna is portrayed as God himself, and God is portrayed as man's best and closest friend, someone he can talk to about anything, and whose advice, given with love and understanding, he can trust completely. In fact, whenever Sanjaya reports on what Krishna is saying, he refers to him not by name but as Sri Bhagavan, the Blessed Lord.

If you find the idea of talking to God strange, you can talk instead to your conscience, your own inner voice, which usually knows what the right thing to do in a given situation is. All you need to do is to shut out the deafening 'But will others think I'm weird / a scaredy cat / not cool enough / not fun enough / stupid / a goody two-shoes?' that fills your head, and you will hear your quiet inner voice, giving you the right advice.'

Try it the next time you are confused about what to do in a tough situation. It may not always be easy to follow that advice -- more often than not, it will be very difficult. Obeying your inner voice may not always make you happy or popular or cool at the time, but later, you will be content, knowing that it was the right thing to have done. And that's what really counts.

Echoes of the Gita

In the American coming-of-age novel, To Kill A Mockingbird, by Harper Lee, seven-year-old Scout's lawyer father Atticus takes a decision to defend a black man against a white man in court. The story is set in the 1930s, in a small, conservative town in Alabama, a part of the USA that was highly racist at that time. The white population of the town is furious with Atticus, and Scout and her older brother Jem bear the brunt of their insults. One day, Scout asks her father exactly why he was taking on such a controversial case.

'Well, most folks seem to think that they're right and you're wrong...'

'They're certainly entitled to think that, and they're entitled to full respect for their opinions,' said Atticus, 'but before I can live with other folks, I've got to live with myself. The one thing that doesn't abide by majority rule is a person's conscience.'

Atticus goes on to fight the case, and lose. But his children never forget the lesson in courage and conviction that he taught them by his actions. 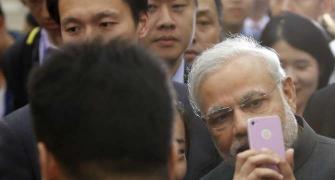 Modi isn't as popular as you think 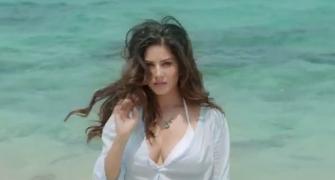 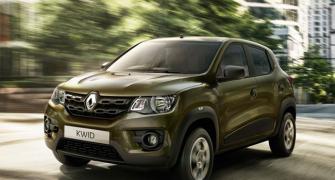 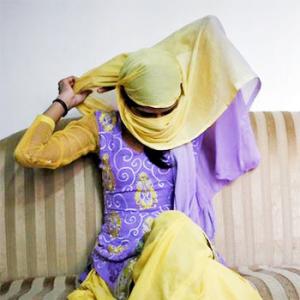