News
Business
Movies
Sports
Cricket
Get Ahead
Money Tips
Shopping
Sign in  |  Create a Rediffmail account
Rediff.com  » Getahead » 'When someone's a part of your journey, his problem is yours' 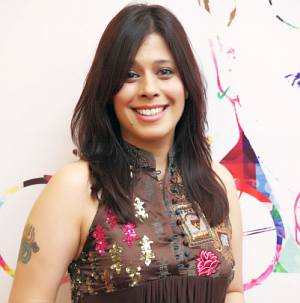 He tapped his knee; the turmoil was penetrating through his body. Don’t do it!

The voice rang through his head. Robert fidgeted in his seat, his eyes fixating on the next aircraft.

"You okay, Captain?" Tom picked up on his edginess. Robert stared on ahead, silent.

What did he expect Robert to say? ‘No, I’m not okay! I am going to commit suicide in a few hours!’

Priya Kumar's latest book I Will Go With You: The Flight of a Lifetime is a tribute to the victims of the Malaysian Airlines MH370 that went missing mysteriously in March 2014.

The book takes you on a suspense-filled drama of life and death, attempting to give you lessons in hope, patience and appropriate decision making.

We bring you an excerpt from the book.

But little does one know that despite doing this, and this, and this -- the actions that guarantee a certain set of consequences -- the desired and the predicted consequence can be altered by the thought and counter intention of just one person present in the game.

As much as the process is critical for success, so is the intention of every person involved. 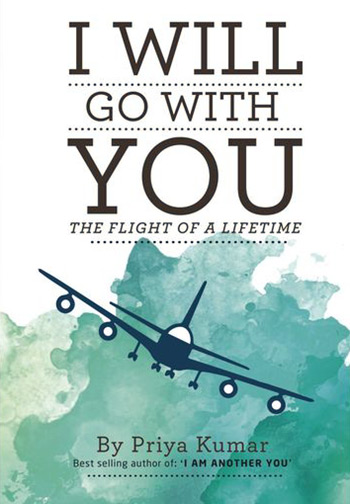 Robert glared at the flight that swooped in for landing. He placed his hand on his chest pocket. A little plastic pouch holding

Two capsules sat close to his heart. Each had enough powder in them to paralyze a hundred-pound beast within minutes, leading to its certain death. The label however said ‘Vitamin C’.

He tapped his knee; the turmoil was penetrating through his body. Don’t do it!

The voice rang through his head. Robert fidgeted in his seat, his eyes fixating on the next aircraft.

"You okay, Captain?" Tom picked up on his edginess. Robert stared on ahead, silent.

What did he expect Robert to say? ‘No, I’m not okay! I am going to commit suicide in a few hours!’

Tom knew Robert was not okay but hoped to hear a comforting and reassuring answer so he could shut up his inner knowing and renounce the responsibility of altering the consequence that Robert’s insanity would bring.

When someone has the control of the vehicle you are aboard, his problem is your problem.

Robert turned his face to the right, his eyes following the aircraft that had just landed. He placed his hands hastily on the control.

The second the voice from the control room crackled on the radio, he propelled the engines into motion without waiting to hear out the instructions. Tom was a little taken aback, but then ignored Robert’s hastiness.

The sky was clear on the left. No landing aircraft were in sight, so Tom was at ease.

The aircraft inched into take-off position and the red lights on the runway shone bright as though sending a warning signal to those who had tuned themselves into the future. And with the job done, they turned green.

Robert pushed the buttons aggressively. His face was expressionless, as though holding a pit of dark secrets, secrets that were brewing up a new destiny for the day that lay ahead.

Tom crossed his heart and kissed his hand in prayer.

Robert pushed the throttle a few inches and that set the aircraft growling and racing over the concrete as the three hundred people aboard braced themselves for takeoff.

The aircraft caught speed and then, as he pushed the throttle back further, the aircraft lunged off its wheels and tore the wind, heading for its destiny thirty-five thousand feet up into the sky.

"I’m Muttu from India," Muttu faked a smile. "What do you do?" he queried in the hope of a return question.

"I’m a writer," Sarah now shifted her weight in his direction while Jim tapped his feet anxiously. He did not like another man hunting in his territory.

"Wow, that’s wonderful. What do you write?"

"Well, I write columns for the New York Times. I interview people from all over the world. I was in Dubai to interview a Sheikh for my upcoming column. However, what I really want to do," Sarah paused as though letting Muttu in on a carefully guarded secret, "is to write books."

"Then why don’t you?" Muttu posed the logical question.

Jim’s ears were glued to the conversation. He had expected Sarah to be a model or an actress, but a writer! She somehow seemed even more attractive to him.

"Well, I have already written a book. I am just stuck at writing the ending. When I sent it to my editor, he said that I don’t have the depth as far as human emotions are concerned. So I left it at that. It sits incomplete on my bookshelf. I don’t have the confidence to bring it to an empowering end," Sarah’s tone and her face dropped while expressing the last sentence.

Sarah had told him the truth about the editor, but what she had not told him was the whole truth -- that the editor was also an ex-boyfriend.

Their relationship had been rocky while it lasted and had not ended on a good note.

She suspected his criticism of her writing stemmed more out of jealousy and vengefulness than a genuine concern for improvement.

Two other passengers on the seats behind had perked up, tuning into the conversation while munching on their early morning meal.

While some passengers had started snoring at the back and the front, their sounds had synchronised into a rhythm.

"To want to be an author is qualification enough to be one," Muttu reassured her. "And maybe it’s time to change your editor."

At that comment, both Muttu and Sarah smiled. Muttu had hit the bull’s-eye with his advice.

"What do you do?" Sarah asked the question which Muttu had started the conversation for. He had lost track of his purpose and gotten involved in his chat with Sarah. He had not expected this kind of honesty from a stranger.

"I am a clairvoyant, an astrologer," said Muttu nervously, his face turning a shade of pink as he said that.

"Oh, you see the future," Sarah said excitedly, shutting her notebook and putting it away. Muttu smiled.

He was used to this kind of response. He had always got this response in his thirty years of practice as an astrologer. People were always curious to know their future, though not all were ready to face it.

The future is a mysterious tense; it keeps people worked up in the present.

Everyone is headed for the future; some have plans for it, while others are just drifting along where it takes them. Moreover, when it comes to someone who can see it, he is the new best friend that people want, especially if he can tell you what you want to hear.

What’s to ask about the future really?

Anyone can be an astrologer.

Look at the person’s thoughts, his mental make-up and what he does in his present and any ordinary person can predict with seventy percent accuracy the state of affairs of another person’s future.

"What can you tell?" Sarah asked curiously.

"Anything. Any question really," Muttu shrugged. He bit his lip nervously. Did he really want to know the answer?

"Will I ever finish my book?" Sarah bit the tip of her finger.

What she really wanted to ask was if she would marry Mike, if Mike was loyal to her. However, she didn’t want to begin with a personal question.

A book was more professional and even if he said that her career as an author wasn’t meant to be, she wouldn’t be as disappointed as she would be if he predicted that Mike wouldn’t be the man in her future.

"What’s your date of birth?" Muttu posed the real question and his heart stopped as Sarah hesitated.

Jim was listening with curiosity. He had estimated twenty-two. That would make her only five years elder and that was an age difference he was willing to ignore.

Muttu opened his laptop with nervous fingers and Jim almost choked on his coke. She was fifteen years elder to him.

Darn the astrologer, he cursed mentally for breaking his little bubble of infatuation. But what the heck, Demi Moore married Ashton Kutcher who was about ten years younger than her, so he was still in the game.

The date was the answer that Muttu was looking for, to look into her future and see where her life was headed.

If a long life lay in wait for her, he could go to sleep peacefully knowing that the flight would land safely in fourteen hours at its destination.

Their fate was, after all, intertwined ever since they had boarded the same flight.

Predicting the future had become very stressful for Muttu, especially when he was having visions of his own life while looking at the future of others.

How does one continue with one’s life knowing that his end is near, that the game will be up soon, knowing that the seer will soon lose his sight and his vision forever?

Muttu had been preparing, had been discovering and trying to see beyond, into the future beyond his end. Was it close? Was he ready?

Muttu tapped at the keys furiously. Eight boxes held in them four numbers each.

As Muttu pressed ‘enter’, all the numbers spun in a flurry and rested in one box that drained the blood off his face.

This was exactly what he did not want to see.

His mouth had turned dry and the image of the screen blurred in front of his eyes.

Of all the predictions that he had made in his life, he had hoped that he was wrong about this one -- for Sarah’s destiny held the certainty of his.

"Where were you born?" Muttu’s voice seemed stuck in his throat.

"What time?" Muttu continued despite the spell of uneasiness that had consumed his body.

"I don’t know. I never bothered to find out," Sarah shrugged.

Muttu punched in some more numbers, but the numbers from that box did not budge.

They all stayed there despite Muttu’s desperate attempts at getting them to rearrange in the other seven empty boxes.

"So, am I meant to be an author?" Sarah leaned as far as she could near him through the aisle seat.

"You will finish your book. It is a masterpiece, I can see that."

Muttu looked at Sarah, trying to conceal his worry.

Sarah would finish writing her book, that was clearly indicated by the one number, which was in the right box, and that left her with the next five hours to do so, for the end of five hours marked … the end of her life.

Published with the kind permission of Embassy Books.

The book, priced at Rs 250 is available at all leading book stores in the country. Click here to buy the book! 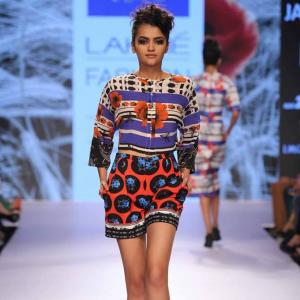 'No one is really sure what they want in life' 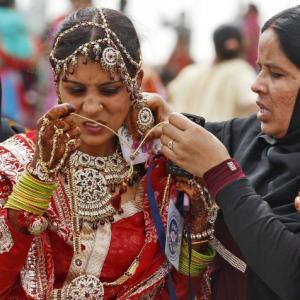