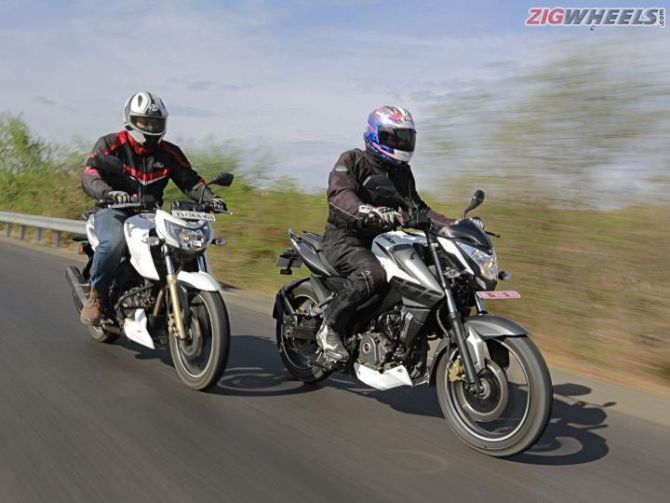 TVS' spanking new naked streetfighter, the RTR 200, has been on Indian roads for a little over a year now. At the time of its arrival TVS' main rival, the Bajaj Pulsar NS200 was in hibernation. But now, Bajaj has brought back the NS200 in 2017 as part of its updated BS IV-compliant lineup. 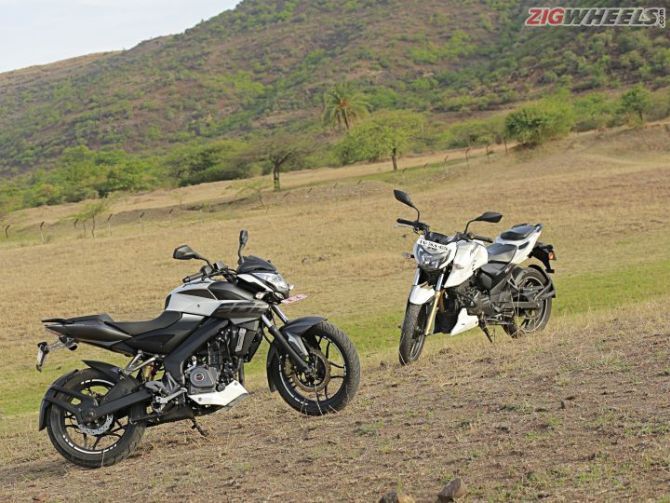 On the styling front, the Pulsar NS200 is a familiar package but the 2017 version gets a two-tone paint job with new graphics, to give it a more handsome appearance.

The headlight offers bright nighttime visibility and gives it a mean look too. On top of that sits a legible, analogue-cum-digital cluster with a shift light beacon and other basic readouts, including a side stand indicator and high-temperature warning light.

The switchgear offered on the clip-on bars of the NS work well. However, the newly designed indicator switch on the left will take some getting used to as its a bit out of reach.

While the NS feels well built, there is still room for improvement considering the overall fit-finish and build quality of the motorcycle.

Moving onto the TVS... 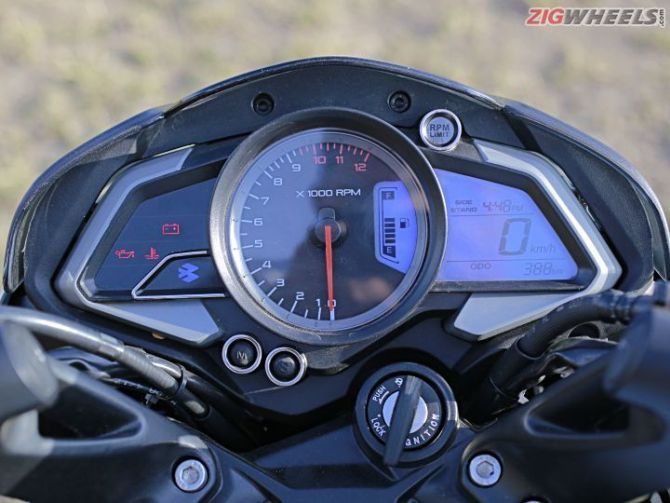 The RTR 200 looks distinctive with neat and chiselled street fighter-inspired looks, and styling cues that are typical of the RTR family.

The headlight looks smart with boomerang-shaped DRL's but fails to lighten the dark, as well as the Pulsar, does.

Sitting on top of it is an easily legible, single pod, white back-lit digital cluster that not only provides all the basic readouts but also provides a host of information like a lap timer, a top speed recorder and fastest lap recorded.

The switchgear placed on the clip-on handlebars feel better in terms of quality, functionality and reach.

The company has also done well to focus on small design highlights, like the offset fuel lid and the air ducts on the aggressive looking fuel tank, which helps channelise the airflow for better engine cooling.

Overall, the RTR, with its attention to detail, rich feeling matte finish metallic paint job and better build quality, clearly holds the edge here with the premium-ness on offer.

On the downside though, the double barrel exhaust doesn't really gel with the overall design aesthetics of the bike as it looks too hefty and overloaded when compared to the overall sharp design cues of the bike. 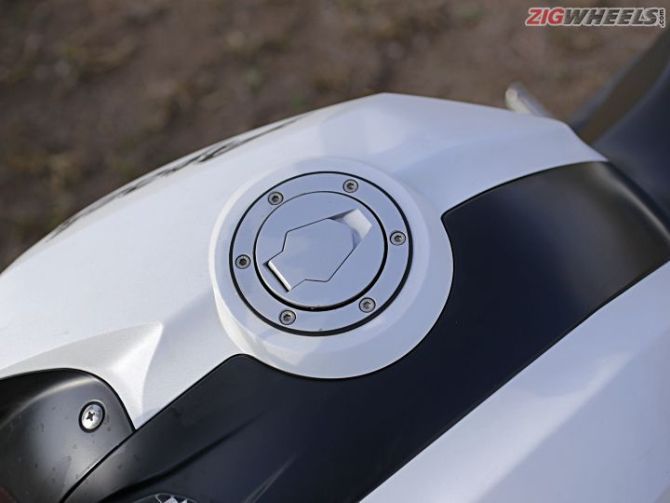 Both the bikes get a four-stroke single-cylinder engine, both are about 200cc, both use 4 valves and both are carburetted. What sets them apart, though, is the liquid-cooled motor on the NS that produces peak power of 23.5PS@9500 rpm and peak torque of 18.3Nm@8000 rpm.

As a result of this configuration, you don't need to rev the RTR hard and with a shorter first gear, it just leaps off the line as it has a comparatively lower torque band, with the torque being available in the low and mid-range between 3000 rpm to 7000 rpm.

Therefore, the RTR manages a 0-60 kmph run in 4.02 seconds. Whereas the NS takes 4.86 seconds, to achieve the same distance, as the torque band is available much higher in the rev range i.e. around 9000 rpm.

So till 60 kmph, the RTR has a strong advantage, one that is almost gifted to it by the Pulsar, on which the revs drop when you first open the clutch. 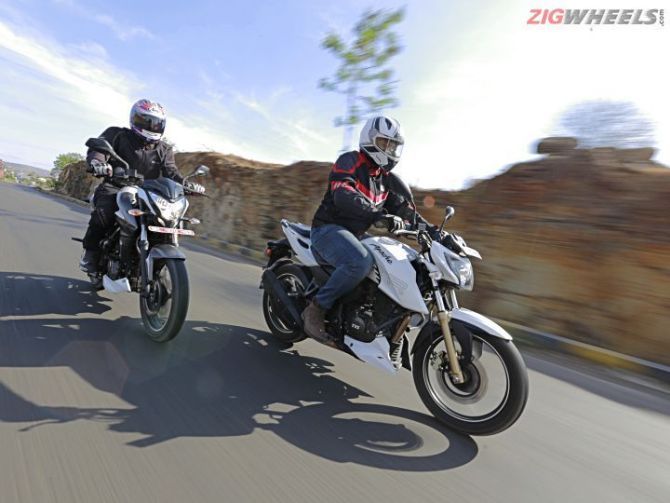 But once the Pulsar gets going, it leaps ahead to manage 0-100 kmph in 12.58 seconds, rolling on to achieve a true top speed of 125.5 kmph, clearly showcasing the liquid-cooled engine's rev-happy nature.

The Pulsar gets a six-speed transmission, allowing you to stay in the power band as the gear ratios are a lot closely stacked when compared to the 5-speed gearbox on the RTR.

It is a similar case even in fourth gear, wherein the Pulsar takes the lead from 40-80 kmph in 6.57 seconds, where the RTR managed to do the same in 7.71 seconds. 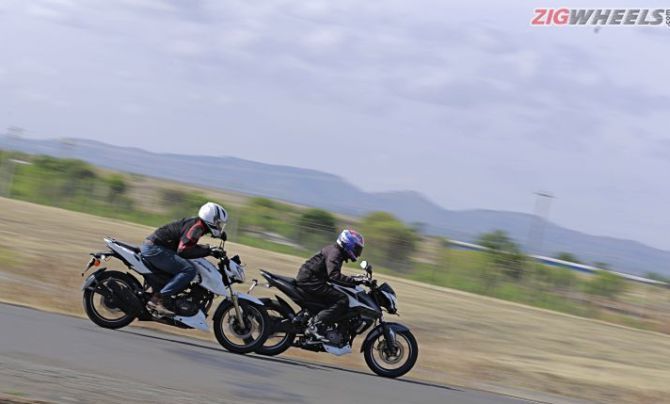 From the saddle though, the RTR not only feels more responsive for city co mmuting but also quieter and smoother. However, with some of amount of vibes setting in, it is the linear style of the lighter-clutched Pulsar that ultimately proves to be quicker.

So yes... the Pulsar is the peppier and faster motorcycle here, feeling relaxed in both the city as well as on the highway. But now, it's time to find out which one is a better performer when it comes to dealing with bumpy roads and the twisties... 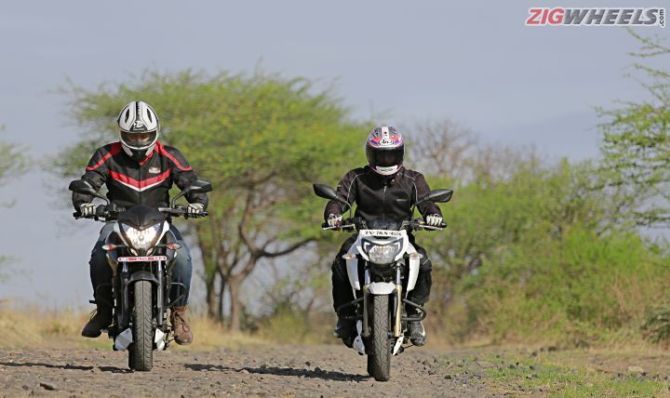 The NS offers better ergonomics, well suited to both, city riding as well as touring.

The clip-ons on the NS are positioned further away from the rider; that said, they have a comfortable reach and don't strain the wrists.

The rear visibility, though, is hindered, as the mirrors get shorter stalks, due to which the rider needs to tuck in the elbows in order to see anything at all.

The slightly lower and rear-set footrests offer a much more comfortable riding posture, the motorcycle feeling more involving to ride. The split seats on offer have just the right amount of padding, making them comfortable for both co mmuting and long distance travel.

The telescopic forks up front and the gas-charged 5-stage adjustable rear monoshock have a stiffer damping, which may feel a bit unsettling over a rough patch of road, but manages to stay composed and sure-footed even with two up, be it large bumps or those pesky potholes that suddenly appear.

The clip-ons on the RTR are positioned closer to the rider, providing a more relaxed reach, and, thanks to the extended mirror stalks, the wide mirrors on offer provide ample rear view. 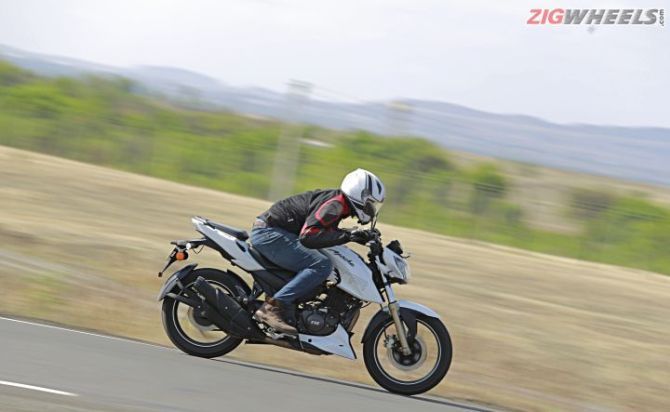 Between the two, the TVS RTR 200 provides more co mmuter-oriented ergonomics with its slightly front-set and high raised footpegs. However, the raised footpegs may tend to get uncomfortable for taller riders as the tank's recesses fail to offer enough room to move around.

The split seats, too, feel soft and more suited to travel shorter distances and for city co mmuting.

Shock absorbing duties on the RTR are managed by telescopic forks up front and a 5-stage adjustable hydraulic monoshock at the rear, both tuned to offer softer damping when compared to the NS, and even though it manages to tackle rough road sections quite well, it doesn't feel composed enough over large bumps as the rider tends to bounce more when compared to the NS.

Many a times, it can also get caught up by sudden potholes, throwing the pillion off guard. 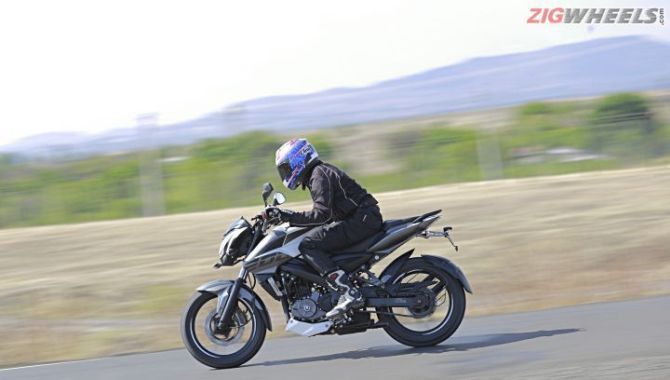 Powered by Bybre brakes, the Pulsar gets a single petal disc up front and rear, offering a sharp bite under hard braking, bringing this Bajaj to a halt from 60 kmph in 16.47 metres.

The RTR too gets a single petal disc brake up front and rear, and even though the brakes feel powerful and more progressive, they fail to provide consistent feedback under hard braking, bringing the bike to a halt from 60 kmph in 21.20 metres. 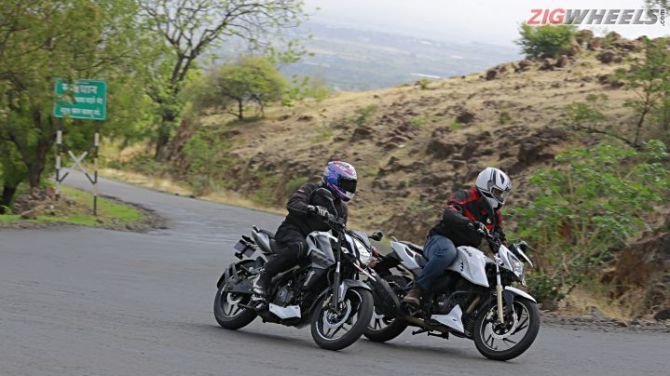 And now, coming to the fun bit

When it comes to taking these machines out for some serious canyon carving, it is the Pulsar that outshines the RTR around corners.

The longer wheelbase of 1363 mm helps make it feel more planted in mid-corner sections, while the MRF tyres offer the much needed grip.

The TVS RTR 200, on the other hand, does take some getting used to as the soft suspension setup fails to provide sufficient feedback to the rider. Also, the bike feels twitchy in mid-corners; this is also owing to a shorter wheelbase of 1353 mm. That said, the RTR does seem to hold its ground rather well, thanks to the grippy Pirelli tyres on offer. 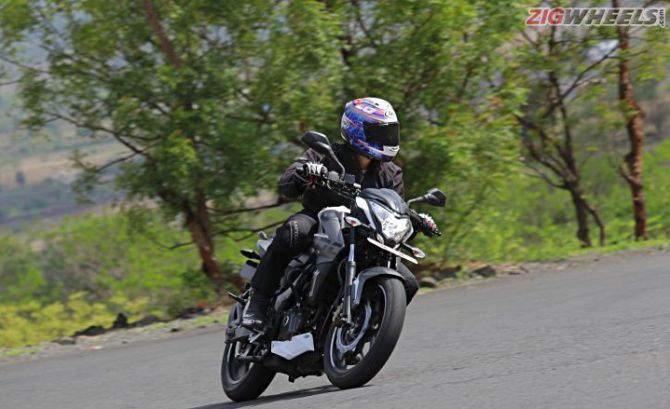 Bottomline: The Pulsar strikes the better balance in terms of ride and handling, while the RTR has a more commuter focused riding posture and suspension setup, which is also apparent in the way it rides.

How fuel efficient are they? 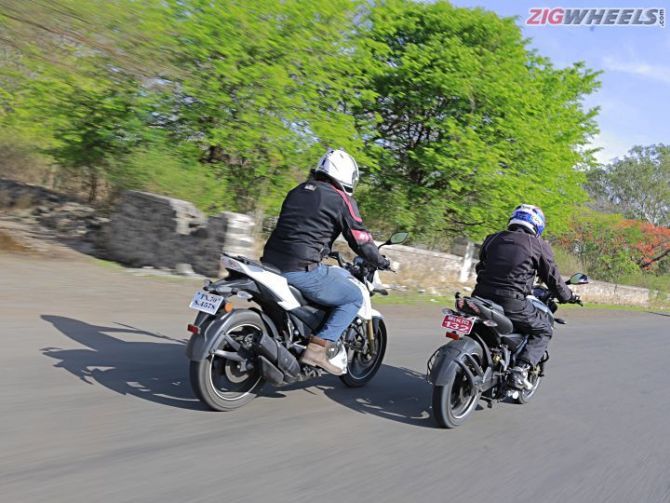 Both the bikes were put through the standardised city and highway riding conditions to find out which one outperforms on the fuel efficiency front and owing to our initial performance test figures, it was no surprise to us that the RTR, with 40.2 kmpl, offered better fuel economy in the city, where the NS gave 36.1 kmpl.

But owing to the 6-speed gearbox and the liquid-cooled engine, the NS offered a better 39.7 kmpl on the highway, compared to 38.4 kmpl on the RTR. So, considering the overall fuel economy, the TVS RTR 200 takes the win with 39.3 kmpl, while the Bajaj Pulsar NS200 gives 37.9 kmpl. 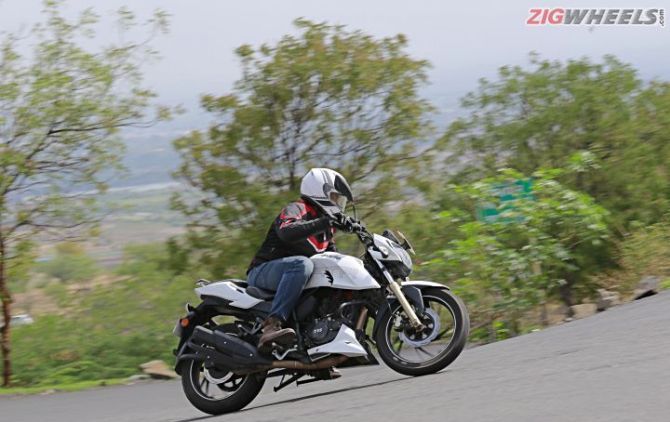 The TVS RTR 200 and the Bajaj Pulsar NS200 then are, without a doubt, two very capable machines on offer today. And, after putting them through some serious testing, the RTR 200 has come across as a worthy contender, making a strong case for itself, offering more commuter friendly dynamics with plush seating and better fuel efficiency in the city.

Quite a commendable effort by Bajaj considering the tech offered, like the six-speed gearbox, liquid-cooled engine and Bybre brakes. That said, the two bikes, despite being priced almost neck and neck, offer completely different characteristics.

So if you are looking for a fun-packed motorcycle that can handle daily duties, with good low-end torque, good fuel efficiency and the much-needed dash of performance to take on the challenges at signal stops, the RTR is the bike to go for. 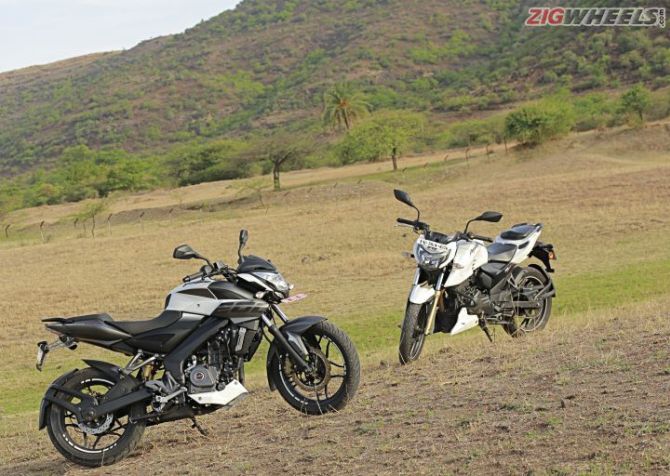 However, if you are looking to charge into corners, experience great straight line capabilities and still be able to run your daily chores with ease, the Pulsar NS 200 is the bike to go for.

Since the Pulsar offers a lot more grunt, better stopping power and well-balanced ergonomics, making it a better all-rounder to take on the city, the highways as well the twisties. 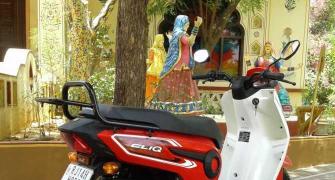 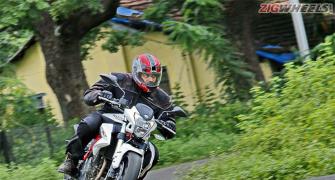 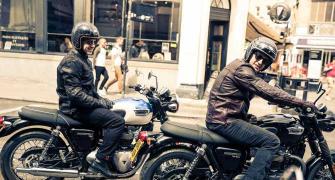 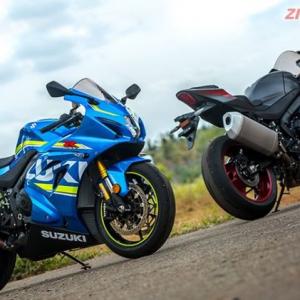 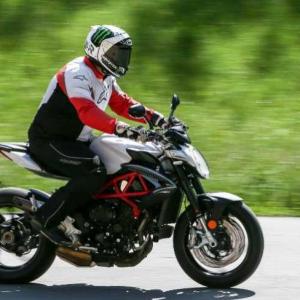